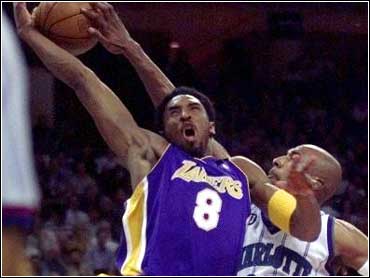 Patience isn't a typical quality of most 21-year-olds. Then again, Kobe Bryant isn't often described as average for his age.

Overcoming early foul trouble, Bryant scored 15 of his 26 points in the final 15 minutes and the Los Angeles Lakers added to their road success with a 92-85 victory over Charlotte on Wednesday night.

"It's hard because you're so competitive and you want to be out there playing," said Bryant, who wound up playing 34 minutes but just 12 in the first half. "But I just had to tell myself to calm down and take it easy."

Glen Rice, acquired in a trade with the Hornets 11 months ago, had 21 points against his former team to help the Lakers improve to 6-1 on the road this season against Eastern Conference teams.

The Lakers, who have won five in a row, got their latest victory in a building that has been especially tough on visitors. The Hornets were 20-3 at the Charlotte Coliseum this season, including a 14-0 mark when holding opponents to less than 100 points.

"It's special to come here and win," Bryant said. "Those guys have only lost, what, like three games here all season long. This is a tough place to play."

Shaquille O'Neal added 18 points and 14 rebounds for the Lakers in front of 23,799, the first sellout crowd in Charlotte since April 1998.

In a battle of two teams playing for the second time in as many nights, the Lakers were held to 39-percent shooting but made up for it by outscoring Charlotte 28-17 in the fourth quarter.

"Both teams' legs looked a little tired after games last night," Los Angeles coach Phil Jackson said. "But we stuck with it and made some plays on defense."

The Hornets got big contributions from Eddie Jones and Elden Campbell, the two players they got in the Rice deal. Jones had 18 points, six rebounds, four assists and three steals, and Campbell had 13 rebounds, but it wasn't enough to prevent Charlotte from losing to the Lakers for the fifth time in six games.

"As bad as I really wanted to win this game, I'm a little upset," Jones said, "because I thought we had them."

Derrick Coleman had 19 points and Anthony Mason 18 for the Hornets, who had a four-game winning streak halted.

Bryant, whose first-half foul troubles limited him to seven points, made four consecutive field-goal attempts in the fourth quarter, putting the Lakers up 80-76 with 6:10 remaining.

Jones, who was on the bench during Bryant's run, came back in and held him scoreless the rest of the way, but the damage had already been done.

The closest Charlotte got in the closing minutes was 84-83 on a 3-pointer by Coleman with 2:58 left. But the Hornets missed their final five field-goal attempts.

"I had to rest Eddie for a couple minutes in the fourth because he played most of the game," Charlotte coach Paul Silas said. "And it just so happened that that's when they made their run."

Jones had six points in a 13-4 surge midway through the third quarter that gave the Hornets their biggest lead. Jones capped the run by stripping the ball from Bryant and going the length of the court for a reverse dunk that made it 62-55.