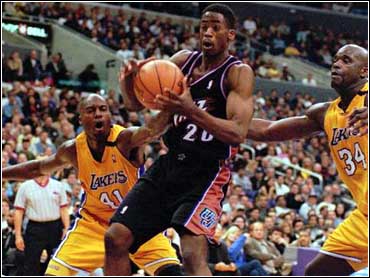 The Los Angeles Lakers held Utah to 21 first-half points Friday night and went on to a 113-67 victory that matched the most-lopsided loss by the Jazz since a 130-84 defeat by the Lakers on March 5, 1986.

That Jazz record seemed in danger with 2:31 remaining, with the Lakers up 112-61. But Utah's reserves outscored Los Angeles' reserves 6-1 over the final minutes to reduce the final deficit to 46 points.

"It was just one of those games when we didn't have a chance," Utah coach Jerry Sloan said. "They just dominated. We couldn't run any plays, and they block the shots and did everything they wanted to do."

"You find out a little bit about yourselves after a game like this," said Utah's John Stockton, who played just 14 minutes and had two points. "If you can fight back from something like this, they it's just one game. If you let it affect you your confidence, the way you play, the way you trust each other then you can easily continue to slide."

along with most of the Lakers' starters about half the game.

"We knew that they were struggling and we just took it to them," he said. "We pretty much did what we needed to do."

Lakers coach Phil Jackson, whose team ended a two-game slide of its own, said, "It definitely was our defense. We got our hands on the ball and forced turnovers in the first half (7 converted into 21 Lakers points)," Jackson said.

The 21 points marked the second-lowest half ever for the Jazz, and their lowest since the franchise moved to Utah. They scored 20 in the first half in 1975 against Seattle.

The NBA record low for a half is 19, set by the Los Angeles Clippers in a loss to the Lakers earlier this season.

Utah's starters got a quick hook. Karl Malone played just 18 minutes and scored 14 points. Malone did not speak with reporters after the loss.

In a match of two of the NBA's better teams but teams that have been struggling recently the Lakers won for just the fourth time in 10 games.

Glen Rice added 20 points for the Lakers and A.C. Green had 10 rebounds. Kobe Bryant had eight of his 13 points in the first five minutes.

The Lakers, beaten 105-101 in double overtime at Utah on Jan. 24, took charge immediately this time, as the Jazz made just one of its first 14 shots and fell behind 20-4 in the first seven minutes.