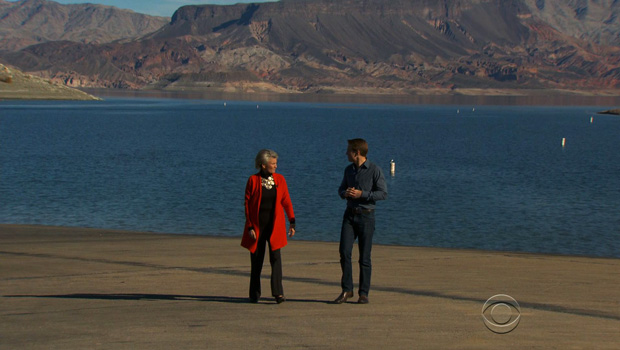 LAKE MEAD, Nev. - When you head out on Nevada's Lake Mead, the first thing you notice is a white line. That's where the water used to be.

"This was all underwater," said Pat Mulroy, the general manager of the Southern Nevada Water Authority. "I mean boats were everywhere. There was a whole marina here."

Mulroy said that the drought began 14 years ago. Satellite photos show the Colorado River, which feeds Lake Mead, is drying up -- so the lake is rapidly shrinking. Islands are growing, and boats are floating far from where they once were.

"It's a pretty critical point," Mulroy said. "The rate at which our weather patterns are changing is so dramatic that our ability to adapt to it is really crippled."

Lake Mead was created by the Hoover Dam in 1935. It provides water for 20 million people in southern Nevada, southern California and Arizona. Since 2000, the lake has lost 4 trillion gallons of water.

The bathtub ring is going to get bigger. Lake Mead is expected to drop at least another 20 feet this year. If it does that could trigger automatic cuts to the water supply for Nevada and Arizona.

That would hit Las Vegas hard. Ninety percent of the area's water comes from the lake. At least one of the city's two intake pipes could soon be above water. So to save the water supply Nevada is rushing to build a third intake even deeper.

Concrete slabs are being lowered 650 feet underground where a massive drill is creating a three-mile-long tunnel, one inch per minute. The project should be finished next year and costs $817 million.

"We're really scrambling to make sure that this intake is done in time before we lose our first intake," said J.C. Davis, the project's spokesperson. "Without Lake Mead, there would be no Las Vegas."

Despite its wasteful reputation, Las Vegas actually reuses 93 percent of its water. It's paid homeowners $200 million to rip up their thirsty lawns. The city added 400,000 people last decade but cut its water use by 33 percent.

The consequences of a western resource in retreat.