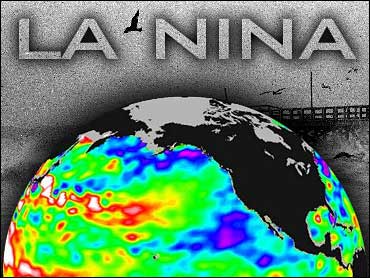 The climate phenomenon known as La Nina appears to be developing, a potential threat of more bad news in the efforts to clean up the oil spill in the Gulf of Mexico.

When a La Nina occurs, there tend to be more hurricanes than normal in the Gulf of Mexico and other Atlantic and Caribbean regions of the Western Hemisphere.

The U.S. Climate Prediction Center said Thursday that La Nina conditions are likely to develop in July and August.

La Nina is marked by an unusual cooling of the sea surface in the tropical Pacific Ocean. Water temperatures in that area can affect air pressure and winds, which can result in changes in the weather in many parts of the world.

In a La Nina, wind shear is increased over the Pacific and reduced over the Atlantic. Wind shear is the difference in strength of winds at low levels compared to higher level winds.

A strong wind shear reduces hurricanes by breaking up their ability to rise into the air, while less shear means they can climb and strengthen. Thus, the Climate Prediction Center notes, "there tend to be more Atlantic hurricanes during La Nina because of this expanded area of low vertical wind shear."

In addition, during a La Nina "more hurricanes form in the deep tropics from African easterly waves. These systems have a much greater likelihood of becoming major hurricanes, and of eventually threatening the U.S. and Caribbean islands," according to the center, a part of the National Oceanic and Atmospheric Administration.

The climate center's current hurricane forecast for this season is for 14 to 23 named storms of which 8 to 14 are expected to be hurricanes and 3 to 7 major hurricanes.

The center noted that during June, sea surface temperature continued to decrease across the equatorial Pacific Ocean, with cool areas expanding across the central and eastern Pacific. In addition, increased rainfall persisted over Indonesia, while the area of reduced rain expanded westward over the western and central equatorial Pacific.

Combined with changes in the winds over the Pacific, "these oceanic and atmospheric anomalies reflect developing La Nina conditions" which are likely to continue through early 2011, CPC said.