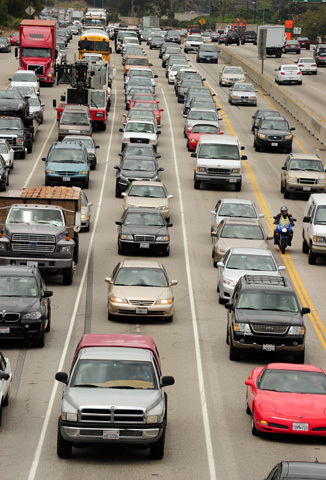 (CBS/AP) LOS ANGELES — "Carmageddon II" — the sequel — is coming to one of the nation's most crowded freeways, and authorities are hoping its subtitle won't be "The Traffic Strikes Back."

Transportation officials say what they would like to see this weekend is a rerun of last year's two-day closure, when hundreds of thousands of motorists dodged doomsday predictions by staying away until the busy, 10-mile stretch of Interstate 405 reopened. It was one of the lightest freeway traffic weekends anyone in Los Angeles could remember.

Hopes are high that next weekend will have the same happy result, as businesses and residents prepare to avoid the roadway that must close again so work can be completed on a bridge.

Contingency plans are in place for any emergencies, such as earthquakes or fires, reports CBS Los Angeles station KCBS.

At Ronald Reagan UCLA Medical Center, just outside the Carmageddon Zone, officials plan to house as many as 300 doctors, nurses and other staff members in dorms at nearby hotels so nobody will have trouble getting to work.

Some patients, including women in the latter stages of complicated pregnancies, are being encouraged to check in before the freeway closes at 12:01 a.m. Sept. 29.

"Everybody, including myself, will be here to man the entire event, just to make sure everything goes safely for our patients and staff," says Shannon O'Kelley, the hospital's chief operations officer.

A group of art enthusiasts, meanwhile, formed "Artmageddon," featuring activities at dozens of museums and art-house theaters. People are encouraged to walk or bike.

The UCLA campus, with about 41,000 students, has emergency traffic diversion plans in place. In Santa Monica, just down the road, a new emergency operations center opened last month. Authorities say every major transit, law enforcement and emergency services agency in the area has been cooperating in making contingency plans.

In the meantime, just what should people do over the weekend when they will hopefully be too afraid to pull out of their driveways?

The agency is partnering with hundreds of restaurants, tourists attractions and other venues to offer discounts to people who can show they used mass transit to get there.

If thousands of people hadn't stayed home on a mid-July weekend last year, authorities say they might have caused a traffic backup so massive it could have spread to connecting freeways, gridlocking the entire city highway system. The result, "Carmageddon," would have been miles and miles of idling cars filled with thousands and thousands of angry people.

"The risk factors are exactly the same as they were last year, so nothing has changed in terms of the heartburn that traffic agency people are feeling right now," says Dave Sotero, a spokesman for the transportation authority.

It's not just any freeway being shut down, but one that, even on weekends, when traffic is relatively light, can carry a half-million vehicles. It's also the one that links the city's San Fernando Valley, where 1.7 million people live, to its dense, urbanized West Side and its beaches.

As they did for the first Carmageddon, officials have been posting flashing freeway signs for weeks warning people all over the state to stay away. On Labor Day weekend, people driving in and out of the desert resort of Palm Springs, 100 miles to the east, began seeing the signs.

"We wanted to get that image of what the stakes were by frankly alarming the public, getting the public's attention, grabbing everybody by the lapels and saying, 'This is a real project that is going to cause a real disaster if we aren't prepared,"' says veteran Los Angeles County Supervisor Zev Yaroslavsky, who is credited with publicly uttering the term Carmageddon.

Although Yaroslavsky says he first heard the word from an aide, he jokes that it will be cited at the top of his obituary as one his greatest achievements.

The freeway is scheduled to reopen at 5 a.m. Monday, Oct. 1, just ahead of the morning rush hour.

Last year it opened 17 hours early, but Sotero says not to expect that again because there's more work this time.

When all the work in the area is completed toward the end of next year, there will be a new, wider and seismically safer bridge crossing the freeway at the city's scenic Mulholland Drive.

The 405 itself will also be wider, making room for a carpool lane through the Sepulveda Pass over the Santa Monica Mountains, where traffic notoriously clogs almost all the time.

If the freeway doesn't reopen on time, that's when Carmageddon would really kick in.

While they insist they don't expect that to happen, officials say they will be ready if it does.