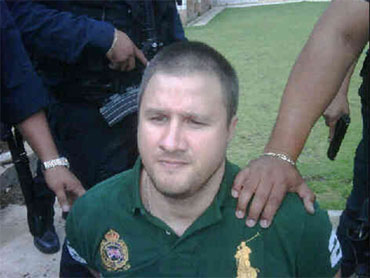 Federal police on Monday captured a long-sought, alleged Texas-born gang kingpin who faces drug trafficking charges in the U.S. and has been blamed for a vicious turf war that has included bodies hung from bridges and shootouts in central Mexico.

The announcement came just hours after the government said nearly 10 percent of the federal police force has been fired this year as part of a campaign to root out corruption.

The arrest of Edgar Valdez Villarreal, alias "the Barbie," was the culmination of a yearlong intelligence operation, the Public Safety Department said in a statement.

President Felipe Calderon also announced the capture on Twitter, calling Valdez "one of the most-wanted criminals in Mexico and abroad." Calderon said operations to bring down this trafficking gang will continue.

The department said Valdez was captured in the state of Mexico, which borders the capital of Mexico City. The statement offered no other details, but included a photograph of Valdez sporting stubble as he kneels on the ground, a police officer's hand on his shoulder.

Valdez — the third major drug lord brought down by Mexico's security forces in less than a year — was charged in May in U.S. District Court in Atlanta with distributing thousands of pounds of cocaine from Mexico to the eastern U.S. from 2004 to 2006.

U.S. authorities had offered a reward of up to $2 million for information leading to his capture, and the Mexican government offered a similar amount.

There was no word from Mexican authorities on any extradition plans.

Mexican authorities say Valdez has been battling for control of the Beltran Leyva cartel since its leader, Arturo Beltran Leyva, was killed in a December shootout with marines in Cuernavaca, a favorite weekend getaway south of the Mexican capital.

The fight against Hector Beltran Leyva — a brother of Arturo — has made a battleground of what was once a relatively peaceful pocket of the country and brought the drug war ever closer to Mexico City. Their fight has spread westward toward the resort city of Acapulco.

Valdez's capture is the government's latest victory against the crumbling Beltran Leyva cartel. Two other Beltran Leyva brothers have been arrested under Calderon's government, which in late 2006 deployed thousands of federal police and soldiers to fight drug traffickers in their strongholds.

That offensive has brought down several major traffickers.

Aside from the Beltran Leyvas, drug lord Ignacio "Nacho" Coronel was killed in a gunbattle last month when soldiers raided his home in Guadalajara. Coronel was the No. 3 in the Sinaloa cartel, one of the world's most powerful drug trafficking gangs.

The Sinaloa cartel was aligned with the Beltran Leyvas until they split in 2008, one of the many divisions among Mexican cartels in recent years that have fueled the country's gruesome gang violence.

Valdez, 37, was born in the border city of Laredo, Texas, and belonged to the Sinaloa cartel before its split from the Beltran Leyvas. Much of the most recent violence in central Mexico has been directed at his allies.

The decapitated bodies of four men were hung from a bridge in Cuernavaca last week, along with a message threatening allies of "La Barbie" and signed by the gang led by Hector Beltran Leyva. Two more bodies later were hung from bridges near Acapulco later in the week, although no gang claimed responsibility.

U.S. prosecutors say they used a federal wiretap of a related case in Atlanta in January 2008 to identify Valdez as the source of thousands of kilograms of cocaine that were imported into the U.S. from 2004 to 2006.

Witnesses said some truckloads traveling from Laredo to Atlanta carried more than 650 pounds of cocaine. The workers made shipments of money, often containing several million dollars in cash, back to Mexico in tractor-trailer trucks, according to the court records.

Mexican authorities had been closing in La Barbie's allies in recent weeks. On July 10, marines raided a house in Acapulco and captured Gamaliel Aguirre Tavira, suspected regional chief of the Valdez faction.

Despite the major arrests, Mexico's drug gang violence has only grown bloodier since Calderon launched his crackdown in 2006, claiming more than 28,000 lives.

In the latest violence, a 12-hour battle between troops and gunmen left killed seven people in the eastern town of Panuco.

The gunmen opened fire and launched grenades at a government electricity station as they tried to escape the soldiers, causing a power outage in a large part of town, said Salvador Mikel Rivera, attorney general in the Gulf coast state of Veracruz, where Panuco is located.

The battle started Sunday night when gunmen in six cars ignored orders to stop from soldiers at a checkpoint, Rivera said. Soldiers, along with state and local police, started a chase that ended at two houses where the gunmen tried to hide, he said. The shootout at the houses lasted until Monday morning.

One soldier and six gunmen were killed.

Panuco is just south of the northern border state of Tamaulipas, where marines discovered the bodies of 72 Central and South American migrants believed to have been gunned down by the Zetas drug gang after refusing to smuggle drugs, in what may be the deadliest cartel massacre to date.

The lone survivor, an 18-year-old Ecuadorean, returned to his home country over the weekend after declining a humanitarian visa that would have let him stay in Mexico, the Foreign Relations Department announced Monday.

The dead migrants were discovered at a ranch about 100 miles (160 kilometers) from the U.S. border in Tamaulipas.

Violence has surged in northeastern Mexico this year since the Zetas broke ranks with their former employer, the Gulf cartel.

Also on Monday, Mexico's government announced that it has fired nearly 10 percent of its federal police force this year for failing checks designed to detect possible corruption.

Federal Police Commissioner Facundo Rosas said 3,200 officers have been dismissed this year for failing to meet the agency's standards.

The agents are barred from taking jobs in any other security force — a recurring problem that Mexican governments have vowed to solve for many years.

Meanwhile, for the first time in its history, the border city of Ciudad Juarez is canceling its traditional Sept. 15 celebration of Mexico's independence from Spain, Mayor Jose Reyes announced Monday.

Reyes said authorities had not received any specific threat surrounding the event but decided it would be too dangerous for large crowds to gather in the city, which has become one of the world's most dangerous amid a turf war between the Sinaloa and Juarez cartels.