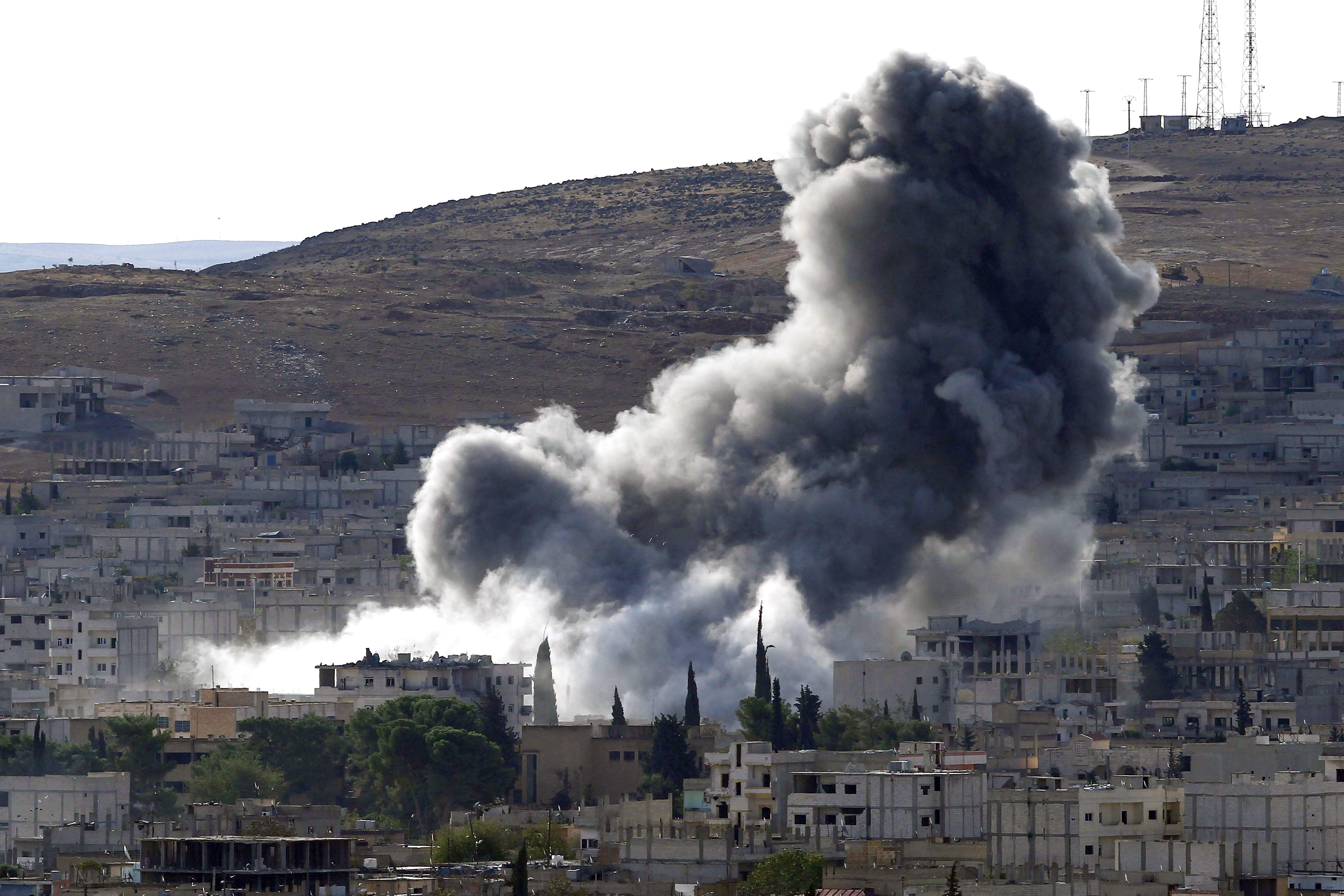 MURSITPINAR, Turkey -- Intensified U.S.-led airstrikes and a determined Kurdish military force on the ground appear to have had some success in halting advances by Islamic State of Iraq and Syria (ISIS) fighters on a strategic Kurdish town near Syria's border with Turkey -- at least for now.

On Wednesday, the Kurdish militiamen were fighting ferocious street battles with the Sunni extremists in Kobani and making advances on some fronts, hours after the U.S.-led coalition stepped up its aerial campaign.

In a surprising display of resilience, the Kurdish fighters have held out against the more experienced jihadists a month into the militants' offensive on the frontier town, hanging on to their territory against all expectations.

"People underestimate the power of determination," said Farhad Shami, a Kurdish activist in Kobani. "The Kurds have a cause and are prepared to die fighting for it."

They also have the advantage of fighting on familiar ground.

Kurdish fighters, on the other hand, know "every street, building and corner" of Kobani and have the powerful "will of resistance," he said. Some of them are experienced fighters who have fought alongside rebels of the affiliated PKK in Turkey as they battled for autonomy for Kurds during a three-decade insurgency.

ISIS launched its offensive on Kobani in mid-September, capturing dozens of nearby Kurdish villages and a third of the town in lightning advances that sent massive waves of civilians fleeing across the border into Turkey.

Days later, the U.S. and its allies began bombing ISIS targets in Syria, but the strikes were slow to take off in Kobani and appeared largely ineffective. Expectations were that the town would fall to the militants within days.

The Kurdish fighters, however, have put up a formidable fight, despite feeling a deep sense of abandonment by an international community they believe has failed to come to their rescue as it did with their brethren and other minorities in Iraq threatened by ISIS militants.

The fighting in and around Kobani has killed more than 550 people, the majority of them ISIS fighters, according to the Observatory.

Abdurrahman and other Syria observers say the Kurds have shown much more tenacity and resilience than other Syrian rebel factions who ended up making "tactical retreats" or simply fled jihadi onslaughts in other areas of Syria.

Equally important in the past few days has been more concentrated airstrikes by the U.S.-led coalition in and around Kobani targeting ISIS infrastructure and positions.

The U.S. military says it launched 39 airstrikes near Kobani in the past 48 hours, designed to disrupt ISIS reinforcements and resupply, and to prevent the extremist group's fighters from massing combat power on the Kurdish-held sections of Kobani.

Plumes of smoke rising from the strikes were visible across the border in Turkey.

Capitalizing on those strikes, fighters of the Kurdish People's Protection Units, or YPG, made some progress against the militants Wednesday, said Asya Abdullah, a Syrian Kurdish leader.

Speaking by telephone from Kobani, Abdullah, the co-president of Syria's powerful Kurdish Democratic Union Party, or PYD, told The Associated Press the Kurdish fighters had advanced near the hill of Tel Shair that overlooks part of the town.

Turkey's state-run Anadolu Agency said the Kurdish forces planted two flags on the hill after retaking it from ISIS and removing the black flag the extremists had hoisted earlier in the week.

The U.S. and its allies also struck oil facilities to try to cut off smuggling by the extremists, hurting the group's income in both Iraq and Syria.

The Paris-based International Energy Agency said in a report that the coalition airstrikes have significantly weakened the group's ability to produce and smuggle oil -- a major source of income for the militants.

In its monthly report released Tuesday, the agency said the aerial bombardment has brought production down to around 20,000 barrels per day from a high of about 70,000 in the summer.

But in remarks underscoring the region's layered crises, Turkey's Deputy Prime Minister Bulent Arinc mocked the Kurdish fighters defending Kobani, comparing their struggle against ISIS to the guerrilla war of the affiliated Kurdish PKK rebels, who have fought a three-decade insurgency in Turkey, largely in mountainous regions in Turkey's east.

"They are not able to put up a serious fight there," Arinc told reporters in the southeastern city of Adiyaman.

"It is easy to fight on the mountain against the military, police, the teacher and the judge. It is easy to kidnap people, but they are not able to fight in Kobani," he said. "I could say a lot more but let me leave it at that so that they are not embarrassed."

The harsh comments also reflected Turkey's delicate position on the fighting in Kobani. On Tuesday, Turkey launched airstrikes against Kurdish rebels inside its borders, defying pressure from the U.S. to instead focus on ISIS militants.

Turkey has said it won't join the fight against ISIS in Syria unless the U.S.-led coalition also goes after the government of Syrian President Bashar Assad, including establishing a no-fly zone and a buffer zone along the Turkish border.

In a stark reminder of Syria's wider civil war, a Syrian lawmaker was gunned down Wednesday in the central province of Hama -- the latest assassination to target a figure linked to Assad's government.

Gunmen opened fire at Waris al-Younes' car as he was traveling on a road linking Hama with the town of Salamiyeh, according to the state-run SANA news agency. There was no immediate claim of responsibility for the attack.

Several Syrian officials have been assassinated since Syria's crisis began in March 2011. The uprising, which later turned into a civil war, has killed more than 190,000 people, according to the United Nations.