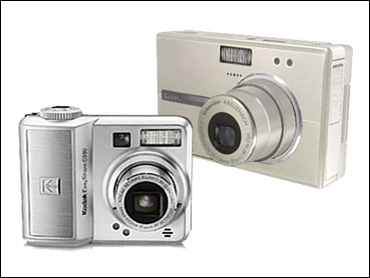 For nearly 120 years, Eastman Kodak has been almost synonymous with photography. It's not the only company to make film, cameras and developing supplies but it was the most prominent during most of the 20th century.

Things have changed in the world of photography. Digital cameras now outsell film cameras and the business of making money on film and developing is not what is used to be. Kodak furthermore has a lot more competition now, not only from traditional camera companies like Canon, Pentax, Nikon and Konica Minolta, but also from technology companies like Hewlett Packard, Sony and Casio.

Kodak is not sitting still. The company was relatively quick to make the transition from film to digital (though it's still very much in the film business) and has been steadily innovating.

This week I had a chance to play with two of Kodak's cameras: its newest state-of-the-art WiFi camera and a more mundane and much less expensive camera which, frankly, I like a lot more.

The EasyShare-One, which sells for $600, is a four megapixel digital camera with a 3X optical zoom and one feature you won't find anywhere else. It comes with a small WiFi card (a bit larger than an SD memory card) that you slip into a slot on the top of the camera to connect to the Internet or a wireless WiFi printer.

After you've taken some pictures, you can pop the card up so that it's able to transmit pictures from the camera to a nearby WiFi network or to one of Kodak's WiFi-equipped printer docks. Once you connect to a network, you can send the picture to Kodak's web-based EasyShare photo gallery (kodakgallery.com) to share with others via the Internet. If you have the optional printer dock, you can wirelessly print your pictures without having to physically connect the camera to the dock.

The system will work with any WiFi network. Also, Kodak has cut a deal with T-Mobile, which operates hotspots at many Starbucks and other locations, to offer access to its network for $4.99 a month. Unlike T-Mobile's regular $40 a month service, the Kodak offer lets you access the network only to send photos from the camera.

I tested the camera at home, on the T-Mobile network and at my nearby Palo Alto Café that offers free WiFi. When you go to send a picture, the screen lets you enter an e-mail address by pressing letters on the touch-sensitive screen. The camera then connects to the WiFi network, sends the photos to Kodak's EasyShare gallery and sends your recipient an e-mail with instructions on how to access the photo.

Click here to check out Larry Magid's podcast interview of Kodak's Mike McDougal, who has practical advice on buying and using a digital camera.
One big advantage to having a Net-connected camera is that once you upload your photos to the Internet, you can then erase the memory and keep taking pictures with no limitations. That could be very handy for someone lucky enough to be on an extended vacation.

Kodak is at the leading edge of what will eventually be commonplace. With the rise of high-speed cellular networks, I expect to someday see high-end cameras with built-in technology to immediately speed your photos to their destination via the emerging broadband cellular networks.

Beyond that, the camera has a couple of nice features but, depending upon your tastes, also lacks of a couple of features.

First, it has an impressive amount of internal memory. 256 megabytes lets you store hundreds of digital photos and, if that isn't enough, you can also insert SD memory cards to add up to a gigabyte additional memory. It also has a large 3-inch LCD screen, which gives you a very nice preview of photos you're about to take as well as a nice way to review and show off pictures in the camera.

But, like many new digital cameras, it lacks an optical viewfinder that lets you hold the camera up to your eye to frame the photo like those old-fashioned film cameras. Admittedly, this is a matter of taste and, I suspect, a matter of age as well.

Younger users, who grew up in the digital age, may be more comfortable using the LCD to frame photos than those of us who grew up with film cameras. The LCD does give you a more precise view of what the actual photo will look like and today's LCD screens don't wash out too badly in bright sunlight (though that can still be a a problem). Yet – call me old-fashioned – in most situations, I still prefer holding the camera up to my eye.

Also like many cameras, the EasyShare-One uses a proprietary lithium ion rechargeable battery. Admittedly, lithium ion batteries are smaller and longer lasting than AA batteries but not as convenient. Personally, I like cameras that take rechargeable AAs. Rechargeable AAs are cheap, easy to come by and easy to recharge. Besides, if necessary you can always use regular alkaline AA batteries, though this isn't an economical option as you'll burn through them quickly.

Accordingly, I've fallen in love with Kodak's C360 pocket-sized camera. This $250 five megapixel camera with a 3X optical zoom lens is quite small (3.3 × 2.5 × 1.4 in.) and light (5.3 oz without batteries) and can run on a variety of battery types, including a Kodak rechargeable battery pack, a standard lithium digital camera battery and regular AA rechargeables.

Click here to take a look at one freshly-minted example.

This picture proves two things: 1) even I can take a nice picture with a small inexpensive digital camera; and 2) Silicon Valley, though not as spectacular as New England, has some pretty nice foliage.

A syndicated technology columnist for more than two decades, Larry Magid serves as on air Technology Analyst for CBS Radio News. His technology reports can be heard several times a week on the CBS Radio Network. Magid is the author of several books including "The Little PC Book."
View CBS News In
CBS News App Open
Chrome Safari Continue
Be the first to know
Get browser notifications for breaking news, live events, and exclusive reporting.