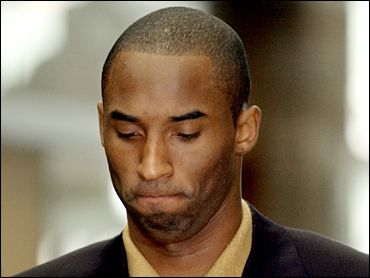 The lead investigator in the Kobe Bryant sexual assault case said Tuesday the NBA star was subjected to a pre-dawn hospital examination because of an "incident" and "statement" during an interview in his hotel room.

Eagle County sheriff's Detective Doug Winters didn't disclose details and the judge has barred open-court arguments about what Bryant said to investigators a day after the alleged rape of a 19-year-old Colorado resort worker.

But Winters provided a tantalizing glimpse inside the 75-minute interview with Bryant early July 2 and he described the Los Angeles Lakers star's reaction when authorities arrived at a Colorado resort to question.

"What's going on, fellas? What's up, fellas?" Bryant asked the two detectives, according to Winters.

The detective said Bryant didn't say a word during an hour-long drive to a Glenwood Springs hospital for the exam to collect hair, fibers and other evidence.

After the exam, Winters said, Bryant turned to detectives and said, "Do the best investigation that you can." They shook hands and he left with his bodyguards.

Bryant's attorneys say prosecutors shouldn't be allowed to use the interview because it was secretly taped and he was never read his rights during what amounted to being in custody.

"That the questioning occurred at night is also an issue because Colorado law requires certain warrants to be served only during the day," reports CBS News Correspondent Lee Frank.

They also want evidence obtained that day — including a Bryant T-shirt stained with the accuser's blood — thrown out.

Bryant, his hand heavily taped after an accident in his garage last week, was back in court after missing Monday's hearing with an undisclosed illness.

Bryant says he had consensual sex with the employee of the mountain resort near Vail where he stayed last summer. The 25-year-old star faces four years to life in prison or 20 years to life on probation if he is convicted of felony sexual assault.

Winters' testimony covered what happened between investigators and Bryant before and after the actual interview in his room at the Lodge & Spa at Cordillera. The judge has said the interview itself will be discussed behind closed doors because the material could harm Bryant's right to a fair trial and may not even be admitted as evidence.

Winters said he didn't know about that rule and also admitted a judge had to tell him he needed two separate court orders to gather evidence: One for hair and similar evidence and a search warrant for Bryant's clothing, including the bloodstained T-shirt.

Haddon asked why authorities didn't videotape the Bryant interview as they had done with the accuser, relying instead in an audio tape recorder in the pocket of one of the detectives.

"So you didn't provide Mr. Bryant with the same courtesy that you provided the complaining witness?" Haddon said.

"We used the equipment we felt was the best to talk to Mr. Bryant with," Winters replied.

According to the detective, the sheriff's office sent a surveillance team of three plainclothes detectives to the resort July 1. They watched Bryant eat dinner and hang out in the lobby with his bodyguards.

Winters said he and fellow Detective Daniel Loya noticed Bryant and a bodyguard standing in the parking lot when they arrived. Bryant greeted them and the two identified themselves as detectives.

Loya told Bryant they wanted to talk to him alone but he was not under arrest and he was free to leave, Winters said.

Bryant's bodyguard walked away and Loya turned around to turn on the tape recorder, Winters said. He told the defense attorney authorities have the right to secretly tape statements from suspects.

The testimony then jumped to what happened after the hotel room interview and whether Bryant had consented to the hospital exam. Winters admitted he had signed an investigation document indicating Bryant had been officially detained, which would have required authorities to advise him of his rights to an attorney and to remain silent.

"It's your testimony today that he was not detained?" Haddon asked.

"It's how you perceive it, but there was an incident that occurred in the room that led me to execute the order (to take him to the hospital for the exam) and there was also a statement after that," Winters said.

Winters did not add details and the line of questioning ended.

Legal observers say that to get Bryant's statement thrown out, the defense must show he felt he was unable to leave the interview. Someone who is being questioned in custody must be read their rights.

On Monday, at least seven witnesses, including the accuser's mother, were called to testify behind closed doors on whether the woman waived her right to medical privacy by discussing her medical history with family members and others.

The defense wants to be able to use the woman's medical background against her in hopes of undermining her credibility and backing up its claim that she had a "scheme" to falsely accuse Bryant.

Defense attorneys have said the woman twice attempted suicide and was taking an anti-depressant in the months before her encounter with Bryant.

If the judge rules the woman waived her medical privacy rights, the defense would still have to prove the information is relevant to be able to use it against her at trial.