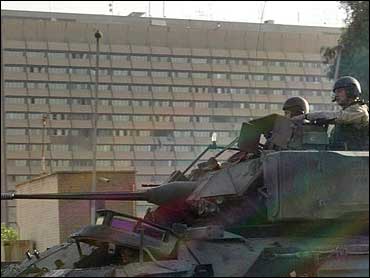 This article was written by CBS News Correspondent Mark Phillips.


In a week in which the U.S. body count in Iraq climbed above 1,900 — and in which the British had to blast their way into a Basra police station to rescue two of their soldiers who had been taken prisoner by their supposed allies — I had a flashback to a dinner in Baghdad in the weeks just after the war — or what turned out to be the first phase of the war.

Paul Bremer hadn't been in the job of trying to run and rehabilitate the country long when he invited some members of the American Baghdad press crowd over for a meal and a chat. It was a doubly enticing invitation. It would be a chance to plumb Bremer's mind on The Plan and it would be a chance to get back into the al-Rasheed Hotel. The place had been the press hacks' dorm in the months (even years) leading up to the war and, for all its flaws (the restaurant's tepid buffet was lethal), it had once felt like home. But the hotel had been out of bounds since it had been requisitioned by the then Coalition Provisional Authority.

Instead of crawling with scribes, camera crews, visiting sycophants and too many of Saddam's spooks and thugs to count, it now had a couple of American tanks parked out front and was lousy with U.S. military and civilian personnel, striding purposefully around the lobby with laptops (or occasionally tennis rackets) tucked under their arms. Aside from that, not much had changed.

(Before the invasion, the al-Rasheed's two slightly overgrown tennis courts had been about the only place in town for a candid word with some of Saddam's cronies, who would show up for a session with the hotel's remarkably good tennis coach. My backhand, he used to say, was like the regime — a lost cause.)

Much of the same staff was still there, even the guy who had been incessantly pushing a floor polisher back and forth across the already gleaming entrance hall marble since the beginning of time. OK, so the tile inlay image of President George Bush 41 with the phrase 'Bush is Criminal' had been removed from the floor just inside the front door and guests could now enter the building without being forced to step on his face. But apart from that there was an illusion of business as usual, albeit with new bosses. It was an illusion that Bremer and the CPA seemed all too eager to accept.

The illusion was that, just as the al-Rasheed had returned to some form of normalcy, the Iraqis too, even the previously top-of-the-food-chain Sunnis, would inevitably embrace their new-found liberation from Saddam's thug-ocracy and believe that the country's own oil revenues would pay to fix whatever three wars (don't forget Iran) and years of sanctions had broken. All it would take was time.

Yet the seeds for the harvest of chaos that Iraq would become were already being sown. I had spent the day of the dinner covering one of a series of demonstrations then being regularly staged by members of Iraq's disbanded army. Several hundred — sometimes several thousand — dismissed officers and enlisted men would march on the entrance gates of the CPA compound to ask for their jobs back ... or at least for the back pay they claimed they were owed.

They said they were desperate, that they had families to feed and hadn't been paid in months. Some even made the case that they deserved a reward for not fighting the American invader. But sympathy wasn't on the CPA agenda. Instead, often amid scuffles between demonstrators and American soldiers, the ex-army members would be sent away ... more embittered than when they'd arrived. "You lost the war and now you want to get paid?" was one comment from an American soldier that I remember thinking wasn't particularly helpful at the time.

There was a lot of talk in Baghdad around then of the need for a gesture of goodwill from the occupier. The place was on its knees, blasted to bits by the bombing, its infrastructure — particularly power and water — already crumbling even before the war damage, looting and sabotage. The population was exhausted physically and fiscally, having already hocked anything of value trying to make do during the period of sanctions and shortages. And it was humiliated.

"They should give every Iraqi family a chicken," was one comment I heard more than once, or more ambitiously, "a hundred dollars." It wouldn't be much, the argument went, but the payoff in good will would be enormous.

I asked Paul Bremer about that idea at the dinner. Was some gesture being considered to win hearts and minds? He shrugged. Clearly the idea hadn't come up.

Instead, de-Ba'athification was the mantra. The army had to go, thought to be too corrupted by three decades of Ba'athist control to be of any use in building the new Iraq. And the police force was next. Bernie Kerik, the ex-New York Commissioner who was then still riding the crest of post-Sept. 11 fame, had been brought in to reorganize it. It was a slow process and not always well thought out. In order to de-Ba'athisize its image, one idea had been to dress the new Iraqi cops in baseball caps. They hated the idea and it was dropped.

Kerik would talk about the reorganization in terms he was used to but which made little sense in the Iraqi context. I asked him once how hard it was to find officers who accepted western ideas of policing. "Well, I got a good guy on the east side," he said, "and another up north." It sounded like he was talking about New York precincts. Kerik had already stayed longer than he had wanted to and was soon gone. The "good guy" on the east side was killed by insurgents not long afterward.

On leaving the al-Rasheed that night, the guy with the floor polisher was still there. He offered a shy — or was it a knowing — smile to a departing familiar face. I've thought often about that night and also about the scene at the beginning of the Russell Crowe movie, "The Gladiator." Remember when the defiant barbarian chief tosses the severed head of the Roman emissary back at the massed legions before the battle? "Some people don't know when they're conquered," Crowe's No. 2 says. "Would you?" Crowe's General Maximus replies. "Would I?"

Mark Phillips, a 23-year veteran of CBS News, is based in the London Bureau.