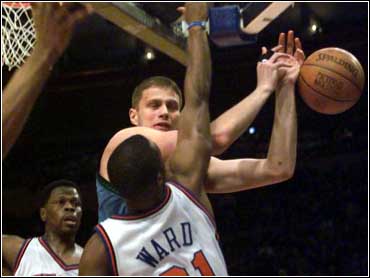 If looks could kill, Allan Houston would have strangled the rim. That's how evil his gaze was after he missed a pair of free throws with 13.1 seconds left.

"I was shocked to the point I couldn't believe I missed them," said Houston, who got another chance with 3.9 seconds left and made both free throws to clinch the New York Knicks' 93-89 victory over Minnesota on Wednesday night.

Houston, an 83 percent free-throw shooter, has shown a tendency this season to miss foul shots at critical times.

It happened at least twice in December, at least once in January and again against the Timberwolves. After missing these two, he turned and gave a nasty look at the basket.

"It's become almost a barrier for him now that it's happened four or five times," coach Jeff Van Gundy said. "It's almost like he got so upset after he missed the second one that he just went up and knocked the next two in."

The Knicks learned after the game that Ward has a non-displaced fracture of the little finger on his right hand, an injury that will sideline him 3-4 weeks.

Ward injured the finger against Charlotte on Feb. 7. He played three games after that, scoring 21 against Milwaukee, zero against Toronto and 10 against Minnesota.

In a game in which they survived an 18-0 run by the Wolves, the Knicks posted their seventh double-digit comeback victory of the season and won for the ninth time in their last 10 games at Madison Square Garden.

Kevin Garnett had 23 points and 13 rebounds to lead Minnesota, which lost its fourth straight. The losing streak is the second-longest of the season for the Wolves, who lost eight in a row in early- and mid-December.

"We have to stop the bleeding somewhere," Garnett said. "These upcoming games at home are very crucial now."

The Timberwolves also were hurt by a pair of missed foul shots, theirs coming from Joe Smith with 42.8 seconds left to leave them trailing 89-87. Houston missed a jumper but Larry Johnson grabbed the offensive rebound, forcing Minnesota to foul. Sprewell hit two from the line with 18.5 seconds left, and Garnett made a pair with 14.6 seconds left to make it 91-89.

Houston was immediately fouled, and his misses gave Minnesota a chance to go for the tie or the lead. But Sam Mitchell missed a runner across the lane, Garnett missed a tip and Houston rebounded and was fouled.

"I was so thankful that I had another opportunity," Houston said. "That's all you can ask for. The bottom line is I made the two free throws, so it canceled out what had happened."

Thomas contributed some strong defense on Garnett, helping hold him to 5-for-17 shooting. The Timberwolves lost for just the second time in 23 games when leading or tied heading into the fourth quarter.

The Timberwolves scored the final 12 points of the first half and the first six of the third quarter to take a 54-43 lead, but the Knicks came right back with an 8-0 run to keep things close.

Thomas slammed home a missed shot to make it 66-66 entering the fourth quarter, and New York's reserves put the Knicks in front from there by scoring 11 of the team's next 13 points.

Thomas twice gave the Knicks a six-point lead, once on a baby hook with 5:56 left and next on a putback of Chris Childs' airball to make it 85-79 with 4:57 left. A three-point play by Mitchell and a pair of foul shots by Garnett made it a one-point game with 4:15 left, and Garnett hit a jumper to give Minnesota an 86-85 lead its first since the third quarter.

A jumper by Sprewell, a foul shot by Garnett and a short jumper by Ewing gave the Knicks an 89-87 lead heading into the final two minutes.