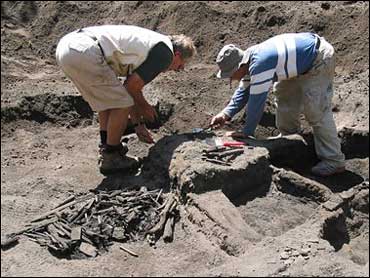 Frederick Weis, picked in the first round by the New York Knicks in last week's draft, isn't sure he will be ready to play in the NBA next season.

Weis, a 7-foot-2 member of the French National team, is still recovering from back surgery that he had in April.

"If I don't feel in shape or strong enough, it may be better for me and New York to wait one more year," he said in a conference call Tuesday. "I'm sure I want to go to the NBA. But, I want to be ready to go. I think I'm not strong enough. Four months is not enough time to recover."

Weis said the back surgery had limited him in the European championships. "I averaged something like 15 minutes a game," he said. "The coach didn't want me to go too quick because I wasn't in shape. The last game, I played 30 minutes."

"My shape is getting better and better. I feel good. I'm sure I will come to the NBA, this year or next year," he said. "I just want to play basketball. The NBA is the best basketball in the world, so I want to play in the NBA."

Weis said he may come to the United States to play summer pro league basketball. New York has a team entered in the Boston Shootout from July 26 to Aug. 3.

The Knicks passed on local product Ron Artest of St. John's to choose Weis, projecting him as an eventual replacement for 36-year-old Patrick Ewing.