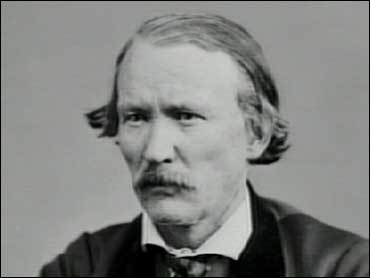 The grandeur and majesty of the American West have always overwhelmed. It is landscape that never fails to humble and inspire the visitor.

And perhaps that explains the near-mythic stories of the early explorers who came here, laid claim to the land, and conquered the Native Americans.

We imagine those explorers as giants. But in reality, the most famous of them all stood a mere 5" 4' in his stocking feet.

Christopher Houston Carson, or Kit Carson, couldn't read and couldn't even write his own name, but he knew how to fight and how to kill.

He was the hero of America's westward expansion - or its villain. Which made Kit Carson irresistible to author Hampton Sides, who wrote the Carson biography, "Blood and Thunder: An Epic of the American West."

"It's really a book about the conquest of the American west, seen mainly through the eyes of Kit Carson," Sides said. "Because Kit Carson lived every phase of that westward expansion. He was a mountain man, an explorer, a scout, a soldier, a transcontinental courier. Finally he was a general."

He was lionized in movies, like 1933's "Fighting with Kit Carson" and in the 1950s TV series, "The Adventures of Kit Carson."

There was a lot of excitement, but very little truth. Even in his lifetime, Carson was made out to be bigger than life. The country had a bottomless appetite for stories about the opening of the western frontier, and reports of Carson's exploits provided the nation with its first western hero. Long before there was Buffalo Bill, there was Kit Carson.

Back East, publishers made him the star of an entire genre of pulp novels known as "Blood And Thunder," the inspiration behind the title of Sides' book.

"He hated those 'Blood and Thunder' books - absolutely hated them because they were fictions," Sides said. "They never got his consent to use his name. He hadn't made any money off these books whatsoever. And they said things like, you know, that he would kill two Indians before breakfast. Which was considered a good thing or something. And the final irony of those 'Blood and Thunder' books is that as much as he hated them, he couldn't read them, because he was illiterate."

But Carson was industrious and his story does read like a novel. He ran away from home at age 14 and joined a wagon train leaving Missouri for New Mexico on the Santa Fe trail.

He gained renown as a mountain man and was soon recruited to guide government expeditions into Oregon and California. He spoke seven Native American languages, and twice he took Indian women as his bride.

Carson said he just wanted to settle down as a rancher, but his nation's call to duty kept him always on the move.

"He covered something like 20,000 miles, almost all of it on the back of a mule. I tried to cover as many of those miles as I could, in my truck," Sides said. "Here he is in Santa Fe. Now he's in Oregon. How does this guy get to all these places?"

Even today, some of those places still bear his name: cities and towns across the West, not to mention rivers, mountains, a national forest, and a major army base.

His legacy is no small point of pride to his great-great-great-grand nieces, Natividad and Terecita, who run a modest museum in Carson's old adobe home in Taos, N.M.

They said visitors to the museum most often ask them how they feel about their uncle.

"The way I respond to that is, I think, after doing all the research, hearing all the stories, that he was one of the greatest American heroes that ever existed," Natividad said. "And I'm proud to say that he was my uncle."

To be sure, wherever Carson went, trouble often followed. He possessed a hair-trigger temper, and despite his kinship with Native Americans, he killed without remorse. As a soldier, he was not one to challenge an order, no matter what its consequences.

"The most troubling chapter in the Kit Carson story occurred here in Canyon de Chilly, Arizona, the heart and soul of the Navajo nation where Carson followed orders and executed a scorched earth policy to force the Navajo to move," Sides said. "To begin the infamous long walk that killed thousands."

Navajo guide Adam Teller's ancestors held off Carson and his cavalry troops for more than three months in this 70 mile-long canyon. It was a period the Navajo called "Time of Fear."

"And Chief Who Wore Lambskins On His Hat would take his hat and he would put it on top of a stick and he would poke it up and the soldiers would shoot at that hat," Teller said, "and pretty soon they realized that this was just a trick ... trying to shoot at the hat and waste their ammunition."

When his patience was exhausted, Carson devised a more brutal plan.

"So he decided to essentially attack the land," Teller said. "To destroy every corn field. Slaughter sheep. Destroy every melon patch and then finally to come down here in the canyon. To essentially try to force them into submission. It was a brutal campaign - there was nothing pretty about it."

The starving survivors were forced to make the 300 mile-long walk East to Bosque Redondo, a patch of land across New Mexico where the Navajo were expected to become farmers. But bad weather and disease made Bosque Redondo a nightmare. The Navajo became captives in a natural concentration camp.

"Navajo people compare Kit Carson to a person like Hitler because of the things that happened in this canyon," Teller said. "He murdered thousands and thousands of innocent people - women and children. So the comparisons of Hitler and Kit Carson are not off by much here in Navajoland."

It was that fearful legacy that Sides confronted on the final stop on his book tour, here, on the Navajo reservation.

"All good stories should have a villain and a hero," Sides said at a lecture about his book in Navajo country. "I was lucky enough to find both in the same man."

Even among the Navajo, there is a growing understanding of the Carson portrayed in Sides' book.

"Carson was a flesh and blood human being, first and foremost. A product of his times, trapped in the very real limitations of his own culture, and it's that flesh and blood Kit Carson that I've spent the past four-and-a-half-years searching for," Sides said.

Indeed, Carson was one of the first to realize the relocation of the Navajo to Bosque Redondo was a failure. After four years, they were allowed to return to their native territory.

Today the reservation is a blended America, where the national anthem is sung in Navajo. Girls basketball is played with passion, and the favorite treat is still fry bread, created nearly 150 years ago when the U.S. cavalry gave the starving Navajo flour and salt and they mixed it with animal fat. It's been a staple every since.

Carson died in 1868, just shy of 59 years old. By the standards of his day, he had served his country well. By other standards, he served America to a fault.