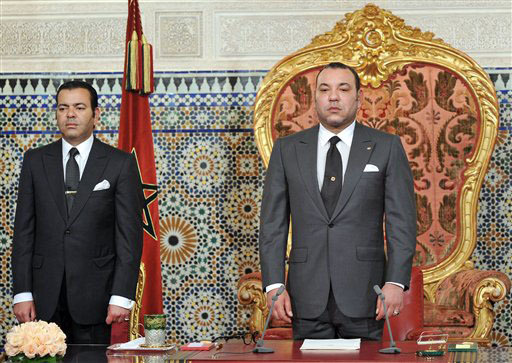 RABAT, Morocco - Moroccan King Mohammed VI announced a series of constitutional reforms in a speech Friday night that he said will turn the North African country into a constitutional monarchy, though pro-democracy activists remain skeptical.

Under the new constitution, the king will remain the supreme commander of the army and a new article formalized him as the highest religious authority in the country. The speech marked the culmination of a three-month review of the constitution at the order of the king after protests calling for reform swept the North African monarchy in February.

Immediately after the speech ended, cars flying Moroccan flags drove through the streets of the capital honking their horns, and young people marched along the wide boulevards banging drums and cheering.

Morocco has long had a parliamentary system with dozens of parties, but they remain weak and many are beholden to the king and his advisers. While the king himself remains popular, there is deep dissatisfaction over the government and the advisers around the monarchy whom are believed to be corrupt and rapacious.

The reform of the 15-year-old constitution represents the king's response to the wave of pro-democracy fervor sweeping the Middle East and North Africa that has toppled governments. The new constitution will be put to a referendum on July 1.

The king said the constitutional reform ``confirms the features and mechanisms of the parliamentary nature of the Moroccan political system'' and laid the basis for an ``efficient, rational constitutional system whose core elements are the balance, independence and separation of powers, and whose foremost goal is the freedom and dignity of citizens.''

The new constitution elevates the prime minister to the ``head of government'' and ensures he is selected from the party that received the most votes in election, rather than just chosen by the king.

The prime minister also will have the new powers of choosing and dismissing Cabinet members and will be able to fill a number of other government positions, though the selection of the powerful regional governors will remain the king's prerogative.

The king also will continue to chair two key councils the Council of Ministers and the Supreme Security Council which make security policy. The prime minister can chair these councils, but only using an agenda set by the king.

Activists from the pro-democracy February 20 movement dismissed many of the changes, describing them as cosmetic.

``Before we had an absolute monarch, now we have an absolute monarch that is a pope as well,'' said Elaabadila Chbihna, an activist with the February 20 movement that has been carrying out weekly pro-democracy marches around the country.

The reforms also strengthen parliament, allowing it to launch investigations into officials with the support of just one-fifth of its members or to begin a censure motion against a minister with the backing of a third, rather than needing the unanimous approval demanded by the current constitution.

The judiciary, which has long been criticized for lacking independence, would be governed by a supreme council composed of judges and the head of the national human rights council. The justice minister would not be on the council.

According to Hicham Ben Abdallah El Alaoui, the king's cousin and a researcher at Stanford University, the reforms follow the same pattern as previous ones, with the king dictating the terms to docile political parties.

``This scenario of a mock discussion among the same players as always, and a happy ending seems a foregone conclusion,'' he wrote in the French daily Liberation. ``Constitutional amendments that are 'good enough' will come out and be approved by referendum and the international community. This will give the regime some credibility for reform so that it can dismiss the demonstrators in the street as 'undemocratic.'''

He predicted continued street protests, however, despite government attempts to paint the February 20 movement as a cover for extreme leftists and Islamic radicals.

Several activists watching the speech Friday night in an apartment in downtown Rabat scoffed at many of the king's proposals and afterward described the new constitution as being just as bad as the old one.

``He just spoke about the good elements in the constitution and then passed over the controversial ones,'' said Chbihna who had seen a leaked draft of the new constitution, which has been expanded from 108 articles to 180. He maintained that the king still held all the reins of power.

Mbarka Bouaida, a member of parliament from Casablanca, however, told The Associated Press that she saw the new constitution as an important step in opening up the political system. She cited the new document's clear commitment to human rights, gender equality and freedom of worship as important steps.

``I think it's progressive. Probably we will need another constitution in 10 or 15 years, but we must go through this one first and give time for the political parties to be strengthened,'' she said, citing weak political parties as a problem in the system.

``It depends on the way we will apply it,'' added Bouaida, who is a member of the National Rally for Independents, which is part of the governing coalition. ``The real value-added of this constitution is that we are institutionalizing the politics.'' In the capital Rabat where crowds marched through the normally quiet nighttime streets, most seemed to applaud the king's speech.

``It elevates the constitution and lets the king pull back so the people and the government can rule,'' said Rafai Touhami, a 60-year-old clutching a sheaf of newspapers standing outside a cafe. ``The king will always be there, though, since the political parties aren't ready to rule,'' he added, reflecting popular distrust of the politicians in favor of the king.

Abderrahim Chaawat, 34, who watched the speech from a cafe in Casablanca said the part of the speech that affected him the most were reforms to strengthen the judiciary.

``There is no justice in this country, it has to be changed totally from head to toe,'' he said. ``If the justice system worked here, then everything would be fine.''