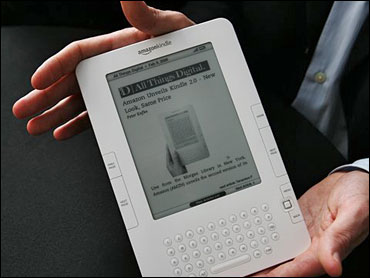 Amazon.com Inc. is cutting the price of its Kindle electronic-book reader yet again and launching an international version, in hopes of spurring more sales and keeping it ahead of a growing field of competitors.

In hopes of stimulating even more growth, Amazon also will start selling a $279 version of the Kindle that will work in 100 countries and be sold to readers outside the U.S. This Kindle will begin shipping on Monday in such countries as Australia, Japan, India and Germany.

In an interview, Amazon CEO Jeff Bezos said the company can now afford to reduce the price of the Kindle sold in the U.S. because of the increased number the company is making - and selling.

Bezos called it Amazon's best-selling product, but Amazon has not disclosed sales figures for the Kindle, which has a 6-inch screen that displays shades of gray, room to store 1,500 books and the ability to download books wirelessly.

The price reduction also shows Amazon is trying to maintain a lead in the nascent e-reader market as the field gets more crowded.

According to a report being released Wednesday by Forrester Research, e-reader sales will total an estimated 3 million this year, with Amazon selling 60 percent of them and Sony Corp. 35 percent. Sony offers a $199 "Pocket Edition" e-reader and larger $299 touch-screen model, and in December it will offer a $399 model that can wirelessly download books rather than needing a connection to a computer.

Lesser-known companies are moving in, too. IREX Technologies plans to release a wireless-enabled $400 e-reader this fall, and Plastic Logic Ltd. intends to sell one with wireless capabilities as well.

Bezos said that increase is happening faster than he expected.

"I think that ultimately we will sell more books in Kindle editions than we do in physical editions," Bezos said in the interview, which was held in the Cupertino offices of Lab126, the Amazon subsidiary that developed the Kindle.

Seattle-based Amazon also sells a larger version of the Kindle, the DX, which was released this past spring and is geared toward textbook and periodical reading. It costs $489.

Having sub-$299 price tags on the U.S. and international Kindles could help Amazon this holiday season - a period that the National Retail Federation is expecting to be sluggish. The trade group forecast this week that retail sales in November and December combined will fall 1 percent from last year.

Forrester analyst Sarah Rotman Epps thinks that e-reader prices need to come down even more if the devices are going to become mainstream products, however. She suggested $99 as a price that would be much more likely to lure consumers.

She said people "have somewhat unrealistic expectations of how much consumer electronics in general, and e-readers in particular, should be."