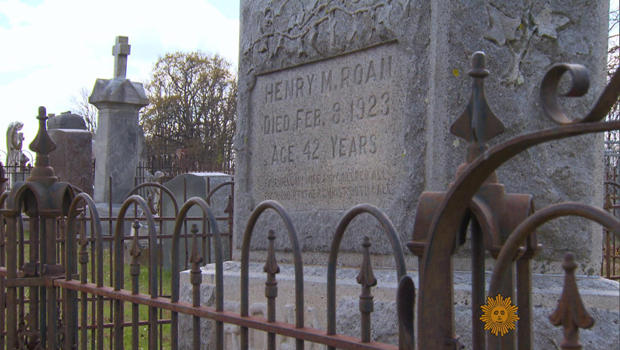 It was called the Reign of Terror. Sounds ominous, and it was ... a chapter of American history that's been largely forgotten, but now is getting a second look. Lee Cowan reports:

In an out-of-the-way corner of Oklahoma called Gray Horse, down a road you wouldn't take unless you knew what was at the other end, sits a small cemetery.

It's unremarkable in many respects -- until you look at the dates. 1923 seems to have been a particularly bad year. And when you look at the ages, it appears few died simply of old age.

Exactly what killed them out here on the Great Plaines has captivated journalist and author David Grann for the last five years. And what he's written has left him with a discomfort he still can't quite shake.

"This is a story that has real evil in it," he said, "evil like I've never covered or ever experienced."

"Really? It was that dark to you?" Cowan asked.

"Yeah, yes. The villain in this story, or one of the villains, and the people complicit, are as evil as anybody I've ever encountered."

His quest took him to the Osage Nation, a remote territory in Oklahoma about the size of Delaware. Like much of the area that was set aside for Native Americans, it wasn't exactly prime real estate.

But in the early 1920s, something happened out here that no-one expected: an oil rush.

"Most white settlers saw it as the ground as being rocky and infertile," said Grann -- which led the Osage to believe they would be left alone. But then, "low and behold, this land turned out to be sitting above some of the largest oil deposits in the United States."

Almost overnight, the Osage -- who owned the land's mineral rights -- went from being among America's poorest to the richest people, per capita, in the world. One Osage writer later described them as "the Kuwaitis of the 1920s."

And how rich were they?

"Oh, they were drawing millions," Grann said. "By 1923, the Osage collectively received that year more than $30 million, which today would be worth the equivalent of more than $400 million. And this was being split up by a group of about 2,000 people."

With the oil royalties, the Osage built mansions, hired white servants, and drove the finest cars. Osage towns like Pawhuska became busting cities, flush with cash and the biggest oil barons of the day.

Pawhuska was famous across the West as one of the most booming of towns because, Grann said, "there was so much money here."

The U.S. government, however, didn't let the Osage control that money. Each ward (as the Osage were called) was assigned a white guardian, supposedly to protect the Osage from mismanaging their new-found wealth.

"There were kickbacks, there was skimming, and in many cases there was just outright stealing, where they would just abscond with millions of dollars from these Osage, and the Osage never saw this money again," Grann said.

But the worst of the worst conspired to do far more than steal, as Grann found out when he uncovered a dusty ledger in the archives: "I opened up the book, and it had the name of the guardian, and underneath it had the names of the wards. And next to many of the names of the wards, it simply said the word dead. And then you go down to another Osage ward, and next to the name, it said dead, dead, skip a few more, dead, dead, dead."

One by one, it seemed, the Osage were being murdered. Between 1921 and 1925, the official number was 27. It became known as the Reign of Terror.

"There were shootings, there were poisonings, one man was thrown off a speeding train, there was a bombing," said Grann. "The terror was enormous, because nobody knew who would be next. But also, nobody was doing anything to stop it."

Few families suffered more than Mollie Burkhart's family. She had married a young Texan named Ernest Burkhart, who was the nephew of the most powerful man in Osage County: William K. Hale.

Hale wasn't entitled to any Osage oil money, but as Mollie's husband, his nephew, Ernest, was.

They hadn't been married long when Mollie's older sister, Anna, was found murdered in a ravine. She was last seen heading there with two white men.

"One of the killers held her up," Grann said, "and the other killer shot her right in the back of the head."

Two months after that, Mollie's mother, Lizzie, died suspiciously. Mollie believed she had been poisoned.

Two years after that, another sister, Rita, died when her house exploded from a homemade bomb.

The family's oil rights ended up in the hands of the only family members still alive: Mollie and her husband, Ernest.

"It's just sad," said Mollie's granddaughter, Margie. "The whole family, just wiped out. For nothing more than somebody's greed."

Because at least one of the murders took place on federal land, the FBI was brought in. It was the young agency's first case, and a young J. Edgar Hoover wanted it solved.

It was so high profile, it was even featured in a movie starring Jimmy Stewart, "The FBI Story."

The real-life agents began to zero in on Mollie's husband. Ernest was arrested, and what unfolded at his trial at the old Pawhuska Courthouse was sensational, to say the least. "This would have been, in its day, considered the trial of the century," said Grann.

Under oath, Ernest admitted it was his own brother who had murdered Mollie's sister, Anna, and that his uncle, William K. Hale, had ordered it, along with the murder of Mollie's other sister, Rita. Worst of all, the plan, it seemed, was for Ernest himself to finish the job by murdering Mollie -- getting sole possession of the oil rights.

"When Mollie realized that her husband -- her husband who had helped search for the killers -- was in fact the killer, she could never look at him again," Grann said.

But that's hardly where the story ends.

Grann believes there were far more murders than the FBI ever investigated. "When I began researching this story, I thought of it as a traditional mystery, a whodunnit," he told Cowan. "And by the end, I realized this wasn't a whodunnit, this was who-didn't-do-it, meaning so many people were part of this."

The gush of oil eventually slowed, the Osage mansions were abandoned, even the Osage school is now a forgotten, overgrown mess.

But the Osage themselves never forgot, even if history did.

"There are still killers who remain unknown," Grann said, "still conspirators whose names have not been identified, and so some of the secrets, unfortunately, will probably remain lost to history."