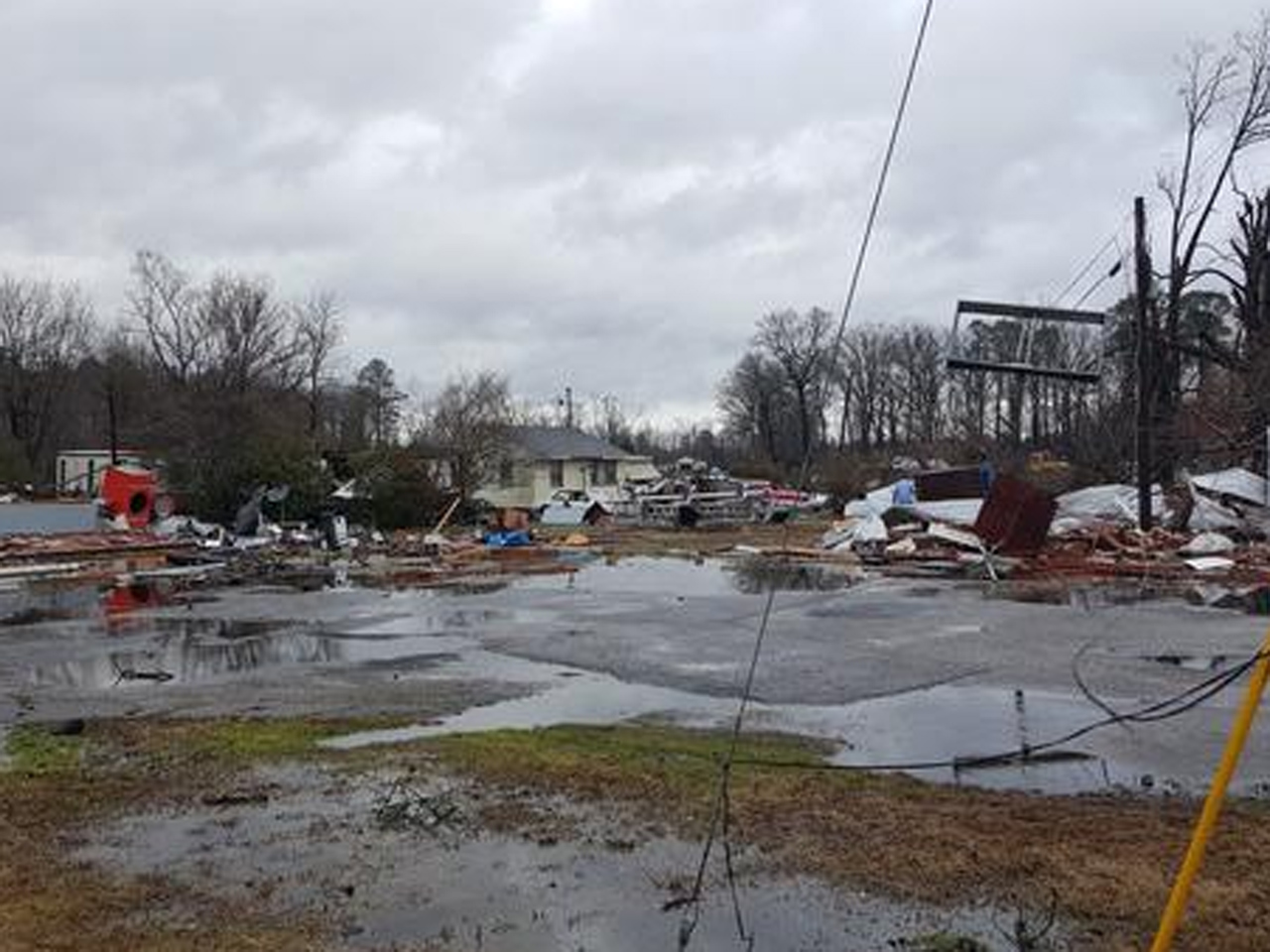 WAVERLY, Va. -- Storms systems killed at least five people on the East Coast Wednesday, four from tornadoes, and brought heavy snow that canceled hundreds of flights in the Midwest.

That brought the death toll from two days of severe weather to at least eight.

Virginia Gov. Terry McAuliffe declared a state of emergency Wednesday night after twisters damaged homes and left thousands without power across the state.

The tiny town of Waverly took the brunt of the storm. The Virginia State Police spokeswoman Corinne Geller said a 2-year-old child and two men, ages 50 and 26, were killed there. Their bodies were found about 300 yards from their mobile home.

At least five structures were damaged in the town of approximately 2,000 and roads leading into town had to be closed because of downed trees and debris tossed by winds gusting to 60 mph, Geller said.

In Appomattox County, a funnel cloud left an 8- to 10-mile path of destruction, killing a man and injuring seven people, state police said.

At least 15 structures were destroyed and 25 injuries were reported when the storm passed through Essex County and the town of Tappahannock, about 45 miles northeast of Richmond, state police said. The injuries ranged from minor to serious, but there were no confirmed fatalities.

In Waverly, witnesses said the storm swept through with little warning.

Timothy Williams said a friend had just come by to take his new car for a drive when the storm hit.

"It picked the car right off the ground, and put it right back on the ground," said Williams, 44. He said they remained in the car until the storm passed.

The storm blew down electrical wires "in a big ball of fire, thrashing all about each other," Williams said. He said they both escaped shaken but uninjured.

In Darlington County, South Carolina, a 58-year-old man was killed by a tree that fell on him after he stopped to remove storm debris from a road near his home,reports CBS Florence, S.C. affiliate WBTW-TV.

The line of storms moved across Pennsylvania and the New York City area Wednesday night, bringing strong winds and heavy rains that knocked down trees and caused scattered power outages.

In the Midwest, a powerful storm brought heavy snow and biting winds, leading to mass flight cancellations at Chicago airports and school closings in several states.

The Chicago Department of Aviation reported more than 1,100 flights had been canceled at the city's two major airports by Wednesday evening.

Northern Indiana was expected to see the heaviest snow, as powerful winds off Lake Michigan blew around up to 18 inches of snow. Parts of Michigan could also see more than a foot of snow, and some schools closed ahead of the storm. Most of the state was under a winter storm warning that extends until at least Thursday afternoon.

One of the hardest-hit areas along the Gulf Coast Tuesday was a recreational vehicle park in the town of Convent, in southern Louisiana. RVs were tossed about and lay on top of wrecked cars and pickup trucks. Two people were killed there, and 31 injured people were taken to area hospitals, St. James Parish Sheriff Willy Martin said.

Briaxton Lott, 23, was in the trailer park when the tornado hit. The pad where his trailer once sat was empty and he pointed to the remnants of it about 100 feet away.

"The whole front end came up and slammed back down, and I grabbed up the baby and the next thing I know we just went rolling end over end," Lott said.

He stopped at The Moorings apartment complex, where winds ripped the roof off of at least two buildings.

Residents in LaPlace, Louisiana, were cleaning up Wednesday after a tornado ripped up trees, tore roofs from houses and terrified local residents. Nearly 200 homes were damaged.

Rose Fuselier, 80, had a gaping hole where her home's front window once stood.

"The whole backyard is covered with trees, and then my shed is torn up, too. The roof is gone, and the siding is partially gone," she said. Still, she said others suffered damage even worse than hers: "I lucked out. I lucked out."