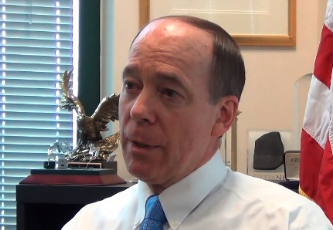 A key official at the agency responsible for spearheading the problematic rollout of Obamacare website HealthCare.gov will leave the administration for a job in the private sector, CBS News has learned.

Troy Trenkle, the chief information officer (CIO) at the Centers for Medicare and Medicaid Services (CMS) will depart his post on November 15, according to an email sent to CMS staff Wednesday by Michelle Snyder, the agency's chief operating officer.

During his time as the agency's CIO, Trenkle oversaw $2 billion in annual information technology expenditures - among them, the development of HealthCare.gov, the federal insurance exchange website at the center of concerns about the shoddy rollout of the health-care reform law.

Since its debut on October 1, the website has been afflicted by bugs and glitches that have prevented consumers from easily browsing and applying for health insurance plans. Administration officials have promised a functional website by the end of November.

During testimony before the House and Senate, Health and Human Services Secretary Kathleen Sebelius, who ultimately oversees CMS, has apologized for the law's rough rollout and vowed to address the website's myriad problems. On Wednesday, during a hearing of the Senate Finance Committee, Sebelius said the website's debut period had been a "miserable five weeks," but she batted aside suggestions that the law should be delayed to provide the administration time to fix the website.

According to Snyder's email, Dave Nelson, currently Director of the Office of Enterprise Management at CMS, will serve as acting CIO upon Trenkle's departure.