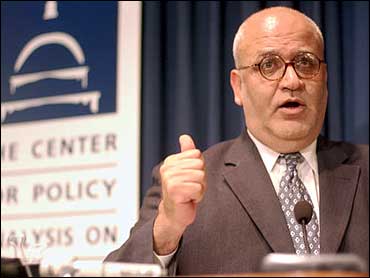 The chief Palestinian peace negotiator submitted his resignation Friday, signaling deep divisions within the Palestinian camp as leaders prepare for a major summit with the Israeli prime minister.

Saeb Erekat, who serves as Cabinet minister in charge of negotiations with Israel, sent a letter of resignation late Thursday, a Palestinian official said on condition of anonymity.

The new Palestinian prime minister, Mahmoud Abbas, asked Erekat to allow him one week to respond to the resignation letter, the official said.

Erekat has been a leading Palestinian negotiator with Israel since Madrid peace talks in 1992.

Israel and the United States have refused to negotiate with Arafat and have pressed the Palestinians to give Abbas more power.

Erekat is not part of the Palestinian delegation that is to attend a summit meeting Saturday evening between Abbas and Israeli Prime Minister Ariel Sharon.

At the summit, the Palestinians will ask Israel to accept the U.S.-backed "road map" peace plan, which aims to stop the fighting and set up a Palestinian state in the West Bank and Gaza Strip.

"We will ask for a clear and frank answer regarding the road map," said Palestinian Parliament Speaker Ahmed Qureia.

Qureia said he was not optimistic, noting that Israel has been sending tough signals, including the seizure of a Palestinian town in Gaza earlier this week. Five Palestinians, including a 12-year-old boy and two teens, were killed in Thursday's raid.

Israeli troops continued Friday to patrol the Gaza town of Beit Hanoun in an effort to stop Palestinian militants from firing rockets across the fence with Israel. Despite the military push, a rocket fired from Gaza landed in an open area of Israel's Negev Desert overnight, causing no damage or injuries.

In other violence, a Palestinian was killed in the southern Gaza town of Rafah. An army spokesman said soldiers shot the man as he ran toward an army post in an off-limits area.

Meanwhile, hundreds of Israeli police were patrolling Jerusalem's Old City to keep order during Friday's Muslim prayers at a hilltop site holy to Jews and Muslims. Israel barred Palestinian men under the age of 40 from reaching the walled Al Aqsa Mosque compound, fearing crowds of young men would gather there to protest this week's arrest of the leader of Israel's Islamic Movement and 14 of the group's members.

Police believe the movement gave funds to the radical Palestinian group Hamas to help support the families of its suicide bombers.

Tensions are also high because this week marked the 55th anniversary of the "naqba," or catastrophe, a day when Palestinians mark the displacement of hundreds of thousands of people during Israel's creation.

Non-Muslims have been barred from the compound since a Sept. 28, 2000 visit by Sharon, then Israel's opposition leader. That visit, meant to demonstrate Israeli control, triggered widespread protests by Palestinians and quickly escalated into the current conflict.

Two large mosques sit in the compound, where ancient Jewish temples once stood. Jews pray at one of the temple's retaining walls, known as the Western Wall, Judaism's holiest place.

Sharon was meeting with top Cabinet members Friday to prepare for Saturday's talks with Abbas, also known as Abu Mazen.

"We want to see what Abu Mazen is going to do, especially in terms of the war on terror," Lapid told Army Radio. "In the meantime, when we're being shelled from Gaza, I'm not sure that it's the right time to make gestures to the Palestinians."

The "road map," sponsored by the United States, the European Union, the United Nations and Russia, is a three-stage, three-year plan that starts with a halt to 31 months of violence and ends with creation of a Palestinian state.

The Palestinians have accepted the plan, but Israel has posed 15 objections, mainly insisting that Palestinians crack down on violent groups before anything else happens.

"We can't just stay where we are," Powell said, during a visit to Bulgaria on Thursday. "We can't miss this moment of opportunity. And so that is my report to President Bush."

Sharon is to discuss the Israeli objections in Washington next week with U.S. President Bush.

Winning support for the plan in Israel will be tough. A survey in Friday's Maariv newspaper found just 36 percent of respondents favor it. Twenty-nine percent were opposed and 35 percent hadn't made up their minds. The poll surveyed 560 adults this week and quoted a margin of error of 4 percentage points.