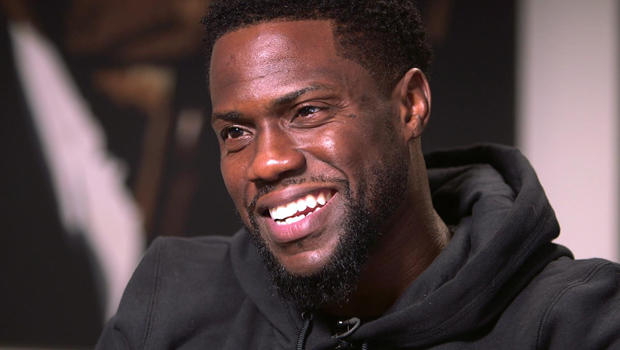 KEVIN HART is one of our most popular comedians, which makes him the perfect choice to answer our occasional summer question: WHAT'S SO FUNNY? Tracy Smith does the honors:

You could call Kevin Hart a comic, but he's more like a comedy rock star. According to Forbes, the 37-year-old entertainer was the highest-paid comedian on the planet last year, eclipsing runner-up Jerry Seinfeld.

He built this comedic empire not so much by telling jokes, but by talking openly about things people usually try to hide, like his fear of the dark, and then there are the embarrassing stories about his family, like the time his drug-addicted drug showed up at his spelling bee:

Smith asked, "Does it do something for your soul to share that with everybody, those deep, personal things?"

"Comedy does come from pain," Hart replied. "I can tell you some things right now that at first you'll go, Oh my God… But then you'll laugh at."

And if pain really is the true source of comedy, he has a deep well from which to draw.

Kevin Darnell Hart was born in Philadelphia in 1979, the younger of two boys. Dad was in and out of jail, a cocaine addict and, Kevin says, a role model for what not to do.

"If he hadn't have made his mistakes live, in person. I would probably be going down that same road in an experimental manner," Hart said.

"You really think so, if you hadn't seen your dad make those mistakes?" asked Smith.

"The only reason why I don't do drugs is because I saw what drugs do. I witnessed it firsthand."

They lived in a tiny apartment on the city's North Side, and mom did her best to make it a home.

He and his brother both slept in the hallway. "I'd be shocked if that place was 500 square feet, maybe. Small. Very small."

"Did it feel small to you?"

"No. It was all you know. It didn't feel small until I went over to one of my friend's and they were doing well. And I saw grass. 'You got grass outside? I don't know how you got that, that's crazy man! You all going to play in this grass? It ain't the school's? Man, that's cool!''

"Girls wanna date the funny guy?  I didn't know how to shut the funny off with women. That was my problem when I was younger."

When he told his mother he wanted to try standup full time, she agreed to help pay his rent for a year … on the condition that he read the Bible she gave him.

"She was like, 'Read your Bible and you'll be fine.' She just kept telling me that. And I was never reading the Bible. But time kept going and, like, you know, I'm getting calls. 'Kevin, where's the rent?' And one night after, God, it may have been a month, maybe, a month of back-and-forth with me and my mom. I decided to open the Bible. And I opened it, then a bunch of rent checks fell out. She had 'em dated throughout the year."

She didn't get to see his success. Nancy died in 2004. And Hart somehow managed to find humor in that, too.

"Like I said, my mom died from cancer. Everybody knows this except my Uncle Richie Jr. Funeral's over, everyone's outside, they're consoling one another. It's a really emotional time. I'm talking. My uncle comes up, taps me on the back, and he says, 'Kevin, I just want to let you know, whoever did this is going to die tonight!'"

Smith asked, " Do you think about, gosh, it'd be nice for her to see me now?"

"No, 'cause she does. You know, I know that I got an amazing angel. You don't get here by yourself. You know, I'm not over-religious at all, but I'm religious enough to believe – "

It seems that someone's looking down on him: Kevin Hart has made more than two dozen movies, many of them box office hits, like the "Ride Along" series.

He also has a growing family: two kids from a previous marriage, and one on the way with his new bride.

But, as he admits in a new book, "I Can't Make This Up: Life Lessons" (published by Atria, an imprint of CBS' Simon & Schuster), as hard as he's worked, he "played stupid," like getting arrested in 2013 for drunk driving.

Was that a wake-up call? "Once I woke up from being in jail, yes, yes," he said.

Now, he gets around L.A. in a kind of rolling command center, usually working the phones.

He talks about moving away from the buddy films he's known for. In fact, he just wrapped a more dramatic role with Nicole Kidman and Bryan Cranston.

But this is a guy who knows where his heart is. "I'm never walking away from comedy. Never.

"I love the fact that I have a craft that I can perfect as long as I want to. And the beauty of standup comedy is, everybody wants it. Everybody needs it. Everybody likes to laugh."