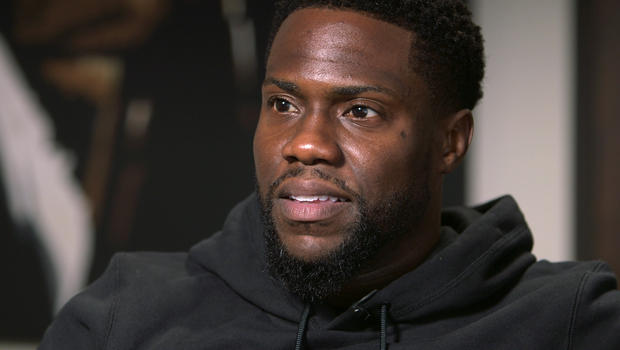 Being funny helped keep comedian Kevin Hart out of fights when he was growing up in a tough Philadelphia neighborhood, but it also kept him out of the dating world, he tells Tracy Smith in an interview for CBS' "Sunday Morning," to be broadcast May 28.

Women in those early days, however, had a different reaction to being around the "funny guy," Hart recalled:

"Women bring out a different side out of you. So it's, like, you can be cool and you can be funny. But to women, you can be goofy when it's time to not be funny. I didn't know how to shut the funny off with women. That was my problem when I was younger."

Hart has put those days behind him, and is now married to model Eniko Parrish. The couple is expecting their first child together. Hart also has two children from a previous marriage.

In a wide-ranging interview, Hart (who has just written a new book, "I Can't Make This Up: Life Lessons," published by Atria, a division of Simon & Schuster) talks with Smith about his childhood in Philadelphia, what he learned from his parents about life, and fatherhood.

He says the most important part about being a father is simply being there for the kids. "Be there. Be present. Hands down. Hands down. Nothing else matters," Hart tells Smith. "All the money in the world does not add up to time to a child."