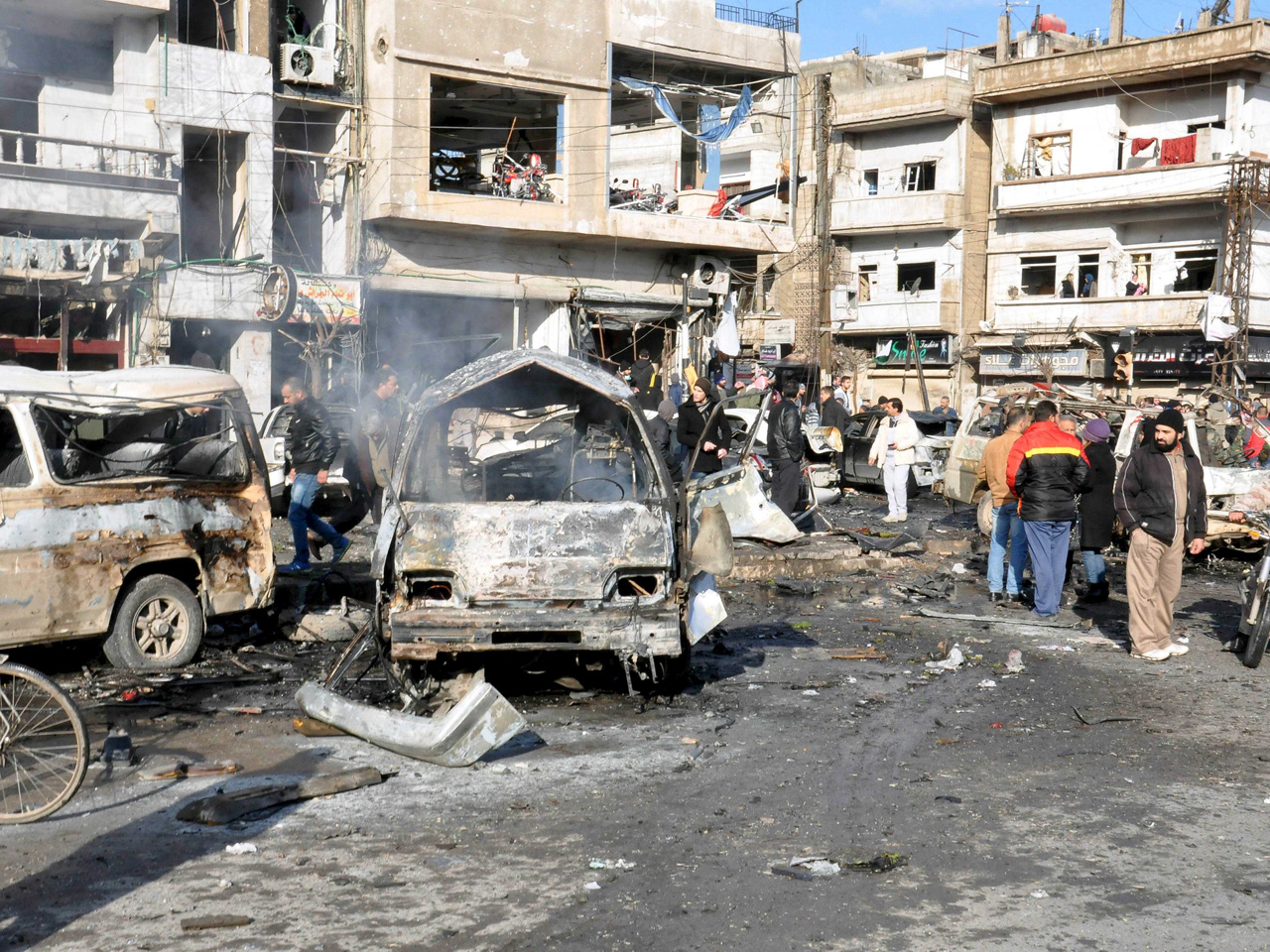 Speaking about the peace talks unfolding in Geneva, Kerry said: "I appeal to both sides to make the most of this moment, to seize the opportunity for serious negotiations, to negotiate in good faith with the goal of making concrete measurable progress in the days immediately ahead."

A triple bombing claimed by the extremist Islamic State of Iraq and Syria (ISIS) killed at least 45 people near the Syrian capital of Damascus on Sunday, overshadowing an already shaky start to what are meant to be indirect Syria peace talks.

Syria's state news agency SANA said that the blasts went off in Sayyda Zeinab, a predominantly Shiite Muslim suburb of the Syrian capital, wounding more than 100 people. SANA said attackers detonated a car bomb at a bus stop and that two suicide bombers set off more explosives as rescuers rushed to the area.

The Britain-based Syrian Observatory for Human Rights, an opposition group that monitors both sides of the conflict through a network of activists inside Syria, said at least 63 people were killed in the explosions, including 25 pro-government Shiite fighters. It said the dead fighters included Syrians and foreigners.

The Sayyda Zeinab suburb, home to one of the holiest shrines for Shiite Muslims, was one of the first areas where Lebanon's Hezbollah group sent fighters in 2012 to protect it from possible attacks by Sunni extremists who vowed to blow up the tomb. Hezbollah and Shiite groups from Iraq are known to have fighters in the area.

The blasts caused widespread damage. State TV footage showed several burning cars and a torched bus, as well as blown out windows and large holes in the facade of a nearby apartment tower.

An ISIS-affiliated website said the attacks were carried out by members of the extremist group, which controls large areas in both Syria and Iraq.

U.N.-hosted peace talks in Geneva are part of a process outlined in last month's U.N. resolution that envisions an 18-month timetable for a political transition in Syria, including the drafting of a new constitution and elections.

The talks got off to a rocky start Friday, with U.N. Special Envoy to Syria Staffan de Mistura meeting only with a Syrian government delegation.

A delegation of the main opposition group said it will not take part in the indirect talks until its demands are met, including lifting the siege imposed on rebel-held areas and an end to Russian and Syrian bombardment of regions controlled by opposition fighters.

The head of the Syrian government delegation told reporters in Geneva on Sunday that the opposition is not serious about what are meant to be U.N.-hosted indirect peace talks and is trying to derail them with preconditions.

"Those who speak about preconditions are coming to this meeting in order to derail it and is not concerned about a Syrian-Syrian dialogue," Bashar Jaafari said. "With the opposition's delegation not showing up, it shows that they are not serious and irresponsible at a time when Syrians are being killed."

The head of the opposition's High Negotiations Committee Riad Hijab warned after meeting Turkey's prime minister in Saudi Arabia on Sunday that the opposition might have to pull out its delegation from Geneva at a time when "the United Nations and international community are not able to stop the violations." His comments were made in a statement obtained by The Associated Press.

Earlier in the day, de Mistura paid a courtesy visit to the opposition's delegation in Geneva saying he is "optimistic and determined," describing indirect peace talks between the government and the opposition as "a historic occasion" to end the country's civil war.

An opposition official said they came to Geneva to make the talks successful, but added that violence must stop first.

"It's the duty of the responsibility of members of the Security Council to put the pressure on Russia to stop these crimes in Syria," opposition spokesman Salem al-Mislet told The Associated Press on Sunday.

"It's enough killing our children, killing civilians. They pretend to fight terrorism. In fact they don't fight terrorism because they bring terrorism there and ISIS is spreading in many areas in Syria more than before because of these Russian strikes," al-Mislet said.

The opposition delegation is to meet with de Mistura later Sunday, al-Mislet said.

Ahrar al-Sham and the Army of Islam, two Islamic groups fighting to overthrow Assad, agreed to take part in the Geneva talks. The ultraconservative Ahrar al-Sham is not part of the team sent to Geneva, but the delegation has named Army of Islam official Mohammed Alloush as its chief negotiator.

Assad's government has long referred to all those fighting to overthrow him as terrorists, but has agreed to negotiations with some armed groups in the latest talks.

A U.N. Security Council resolution adopted last month tasked Jordan with compiling an agreed list of terrorist organizations that would be excluded from the talks. Work on the list is still underway.

While virtually all parties agree that both ISIS and the al Qaeda-affiliated Nusra Front should be excluded, the two sides are divided over Ahrar al-Sham and the Army of Islam. The mainstream opposition views both groups as fellow rebels, despite their ideological differences, while the Syrian government and its close ally Russia view them as extremists.

"We will neither sit down directly with terrorists, nor have dialogue with them," Syrian Information Minister Omar al-Zoubi told state TV Saturday evening.