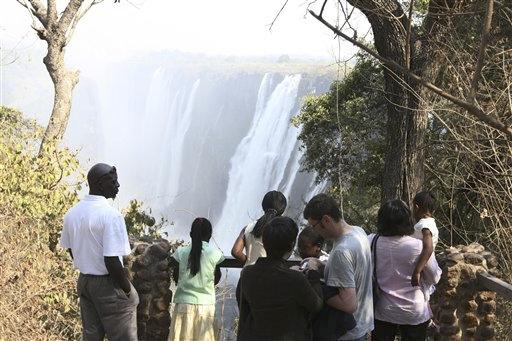 new videotape
of the terrorist leader surfaced just before the election. Bush accused the Democrat of "shameful" second-guessing in the face of threats by America's deadly foe.

The broadcast of the bin Laden tape jolted the campaign's closing days, accentuating the terrorism theme with a reminder of the Sept. 11, 2001, attacks, and Kerry revived his contention that Bush missed an opportunity to capture or kill bin Laden during the Afghan war.

"I believe I can run a more effective war on terror than George Bush," Kerry asserted.

Bush told an Ohio rally: "My opponent continues to say things he knows are not true." He said, "It's especially shameful in light of the new tape from America's enemy."

The bin Laden tape, which aired on the Arab al Jajazeera network, jolted the campaign in its final days.

Earlier Friday, Mr. Bush and Sen. Kerry delivered the closing arguments they hoped would seal victory — Mr. Bush asserting he was best qualified to protect the nation and Kerry contending the president didn't understand the problems facing the country.

After countless speeches and hundreds of millions of dollars in commercials, there was little to say that hadn't already been said. Both sides focused on mobilizing supporters amid expectations that intense voter registration drives would swell Tuesday's turnout to record levels. In Ohio, Republicans lost a court appeal to block tens of thousands of voter registrations.

After four days of tough attacks on Mr. Bush over missing explosives in Iraq, Kerry said the election offered a fundamental choice. "Do you want four more years of the same failed course?" he asked voters in pivotal Florida, the state where the race was decided four years ago. "Or do you want a fresh start for America that takes us in the right direction?"

The Democratic challenger implored Floridians to "walk out of here and vote," a reference to early voting allowed in 32 states. In Tennessee, for example, 1,127,739 voted during the 15-day early period that ended Thursday evening.

Mr. Bush returned to the central theme of his campaign, that he is a stronger leader than Kerry and would do a better job of protecting the country.

"I've learned firsthand how hard it is to send young men and women into battle, even when the cause is right," the president said in New Hampshire, the only northeastern state he carried four years ago — and where he is trailing now, according to a new poll.

"The issues vary. The challenges are different every day. The polls go up. The polls go down. But a president's convictions must be consistent and true," Mr. Bush said. He did not even mention Kerry in his first speech in Manchester, N.H., but brought up his opponent at the next stop, in Portsmouth.

A spate of new state polls reflected the tightness of the race. The race is essentially tied in Wisconsin, which narrowly voted Democratic four years ago.

In keeping with his theme of national security, Mr. Bush was accompanied in New Hampshire by relatives of victims of the Sept. 11, 2001, terrorist attacks. He singled out George Howard, a Port Authority officer who was off duty but responded when he heard the Twin Towers had been attacked.

Mr. Bush said Howard's mother, Arlene, gave him her son's police shield. "I will never forget the fallen," Mr. Bush said. "God bless you, Arlene." An event organizer mistakenly thought the president was ending his speech and fired off confetti cannons. The president continued his remarks.

Organizing a big finish, the president planned election-eve rallies in Ohio, Pennsylvania, Wisconsin, Iowa, New Mexico and Texas, the White House said. Kerry's tentative plans for Monday call for stops in Wisconsin, Michigan and Ohio. Looking beyond the election, the president was planning a Cabinet meeting on Thursday.

After scalding Kerry earlier this week as weak and wavering, Mr. Bush told a rally in Portsmouth, "I'm sure Senator Kerry means well but his policies are the wrong policies at this time of threat."

Kerry appealed for Jewish support in Florida, saying he has been a reliable friend of Israel. "I have never wavered on one vote, on one resolution, on one issue," he said.

There was a flurry of last-minute political mail. In Florida conservative activists sent about a million fliers accusing Kerry of being weak on terrorism. One mailing showed an image of school children wearing gas masks and warned that the consequences of a Kerry presidency "are too frightening ... to imagine."

While Kerry muted his remarks, running mate John Edwards said the news of the past week — a missing cache of explosives in Iraq and the FBI investigation into how Halliburton won no-bid contracts in Iraq — was part of "long trail of failure" by the Bush administration.

In an interview with , Edwards called the Halliburton investigation "very troublesome. Vice President Cheney left Halliburton as CEO to become vice president of the United States. Halliburton has a long history of problems. … It is just a long pattern of favoritism that this administration shows to their friends and the people they have close contacts with."

Bush spokesman Scott McClellan said there were "clear guidelines and procedures" on contracts, and if there was anything improper the president would want to know about it.

In New Hampshire, demonstrators at the Bush rally held up signs that spelled out "360 TONS." Bush backers shouted them down with chants of "four more years!" and the president's backers ripped the placards from the protesters' hands.

After his appearance in New Hampshire, Mr. Bush was to share the stage in Ohio with California Gov. Schwarzenegger. Freshly minted World Series champion pitcher Curt Schilling of the Boston Red Sox had been expected to appear with Mr. Bush in New Hampshire, but doctors advised him not to travel because of an injured ankle, Bush aides said.

Former New Hampshire Sen. Bob Smith, a conservative Republican who once ran for president as an independent, endorsed Kerry on the eve of Mr. Bush's last trip to the state before the election. Smith, in a letter released by the Kerry campaign, praised his former colleague as a Democrat "who crossed the aisle to forge a bipartisan coalition in the Senate to balance the federal budget."

The Bush campaign, seeing an unusual opportunity to make gains on exotic Democratic turf, said Thursday that Cheney would go to Hawaii for a rally Sunday night, a striking investment of time and travel for a state Republicans have won only twice since statehood in 1959.

The Democrats weren't standing by. Al Gore, who won the state by nearly 20 points four years ago, was on his way to campaign there and so was Kerry's daughter Alex.

Former President Clinton was also embarking on a three-day campaign trip for Kerry to the battlegrounds of Nevada and New Mexico, before returning to his native Arkansas, a state where Democrats think they may be able to pull off a surprise win.