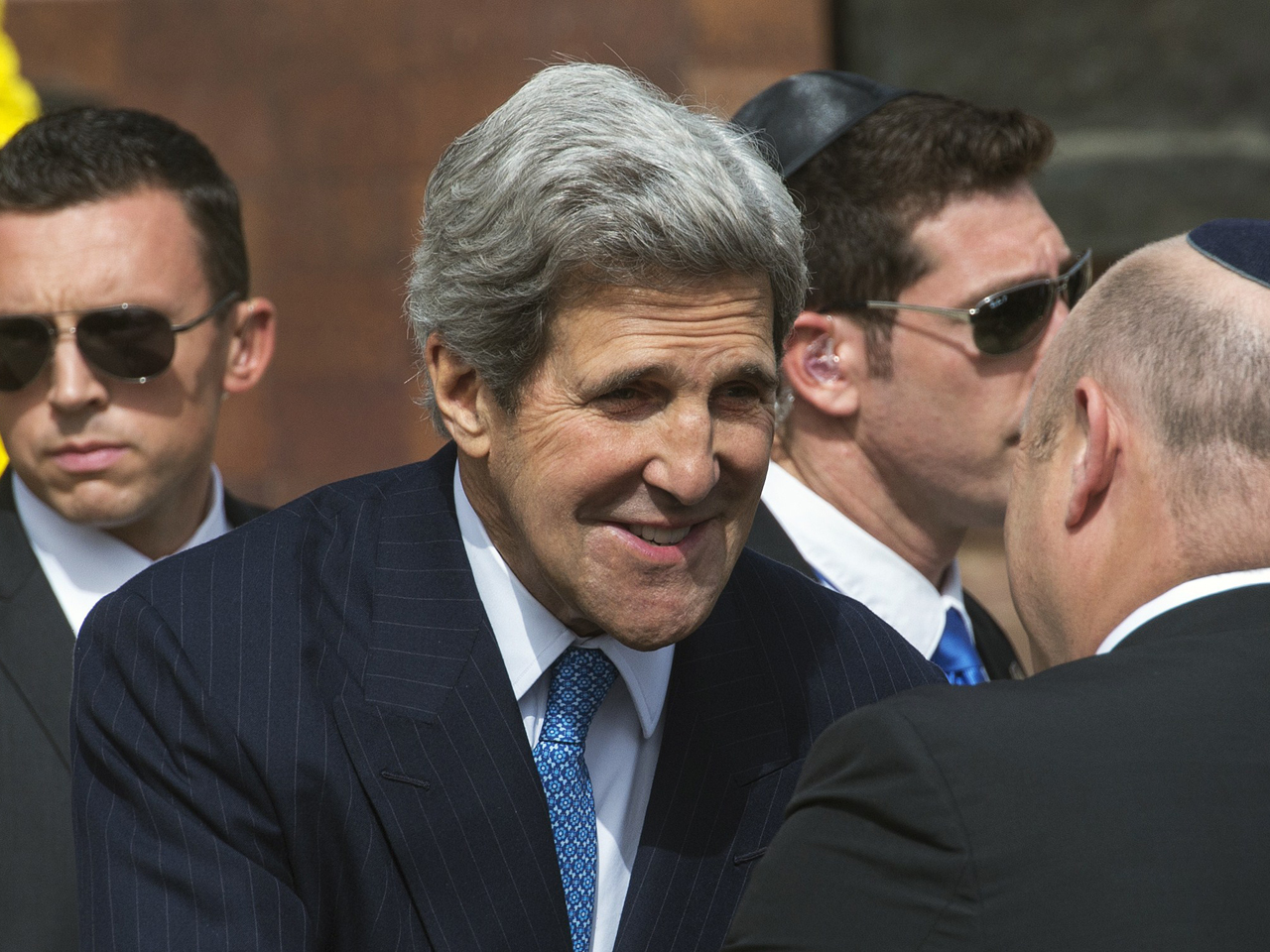 JERUSALEM U.S. Secretary of State John Kerry is looking to breathe new life into dormant Mideast peace talks in meetings Monday with Israeli Prime Minister Benjamin Netanyahu and other senior Israeli and Palestinian officials, amid talk of modifying a decade-old Arab plan that's long been greeted with skepticism by the Jewish state.

A day after meeting one-on-one with Palestinian President Mahmoud Abbas, Kerry spent the morning of Israel's Holocaust memorial day at Yad Vashem, laying down a red, white and blue wreath at the nation's official monument for the 6 million Jews murdered during World War II.

He was to meet privately Monday with Palestinian Prime Minister Salam Fayyad and Israeli President Shimon Peres, before a dinner with Netanyahu and other Israeli officials.

Kerry is trying to end a 4-1/2 yar stalemate between the Israelis and Palestinians during which they've hardly negotiated peace at all. Making his third trip to the region in two weeks, he has yet to outline any new plan, but U.S. officials say he is exploring several ideas to try to corral both sides back into direct talks.

Palestinian and Arab officials have pointed to one idea in particular: an attempt to revive, with modifications, the 2002 Arab Peace Initiative that offered a comprehensive peace with Israel for a pullout from territories captured in the 1967 Mideast war.

The officials say Kerry is seeking greater Arab-Israeli security commitments and softer language on borders as part of the plan.

But key obstacles remain. Israel has not softened its objections and the Palestinians say they turned down a request from Kerry for the proposed changes.

Kerry and Abbas met for an hour behind closed doors in Ramallah on Sunday evening, where they discussed "the path to peace," according to a senior State Department official. Beforehand, U.S. and Palestinian officials met in a larger format to discuss strategies for economic growth in the Palestinian territories and how to best create a "positive climate for negotiations." The official spoke on condition of anonymity because of Kerry's orders not to brief reporters.

U.S. officials refused to comment specifically on the initiative, which was revolutionary when it was introduced by Saudi Arabia's then crown prince, King Abdullah, and later endorsed by the 22-member Arab League at a summit in Beirut. However, it was overshadowed by fierce Israeli-Palestinian fighting at the time and never won Israel's support. The Arab League re-endorsed the offer in 2007 and technically it remains in effect.

In the 1967 war, Israel took control of the West Bank, east Jerusalem, Gaza Strip, Sinai and Golan Heights. Israel returned the Sinai to Egypt in 1982 in the framework of a peace treaty and pulled out of Gaza unilaterally in 2005. Israel annexed the Golan Heights in 1981 and peace talks with Syria over the territory have repeatedly failed.

Israeli-Palestinian peace talks have been deadlocked since late 2008, in large part over the issue of Israeli settlements in the West Bank and east Jerusalem. The Palestinians refuse to talk while Israel settles its population on the occupied territories where Palestinians want to establish their state. They have demanded that Israel accept the 1967 lines as the basis for a future Palestine, but Netanyahu rejects a return to the 1967 lines and calls for talks with no preconditions.

Abbas spokesman Nabil Abu Rdeneh said the Palestinian leader called for a solution based on the 1967 lines in his Sunday meeting with Kerry. He did not say whether the Arab peace initiative was discussed but confirmed Abbas was leaving Monday for talks on the plan at an Arab League meeting in Qatar.

There, a special committee will hold an "urgent meeting" on the subject Monday, said Mohammed Subeih, the Arab League's undersecretary for Palestinian affairs. Qatar's prime minister will chair it and the foreign ministers of key countries such as Egypt, Saudi Arabia, Jordan and the Palestinians will participate.

Subeih said the committee would form a delegation led by Arab League chief Nabil El-Araby and the Qatari prime minister to travel to Washington in the coming weeks with the goal of drawing a new roadmap to "end Israeli occupation."

The chief Palestinian negotiator, Saeb Erekat, said Kerry has been floating the Arab initiative as a possible way out of the deadlock.

Officials say Kerry has proposed two small changes to make it more palatable to Israel. He wants language saying the 1967 lines can be modified through mutual agreement and providing stronger security guarantees.

But Erekat said the plan could not be changed.

"Kerry asked us to change a few words in the Arab Peace Initiative but we refused," he told the Voice of Palestine radio station on Sunday.

Israel has rejected a return to the 1967 lines for both security and spiritual reasons, arguing that the frontiers are indefensible and would mean a withdrawal from east Jerusalem, home to the city's holiest Jewish, Muslim and Christian religious sites. In the past, however, Netanyahu has described the peace initiative as a welcome sign of acceptance from the Arab world while refusing to accept its conditions.