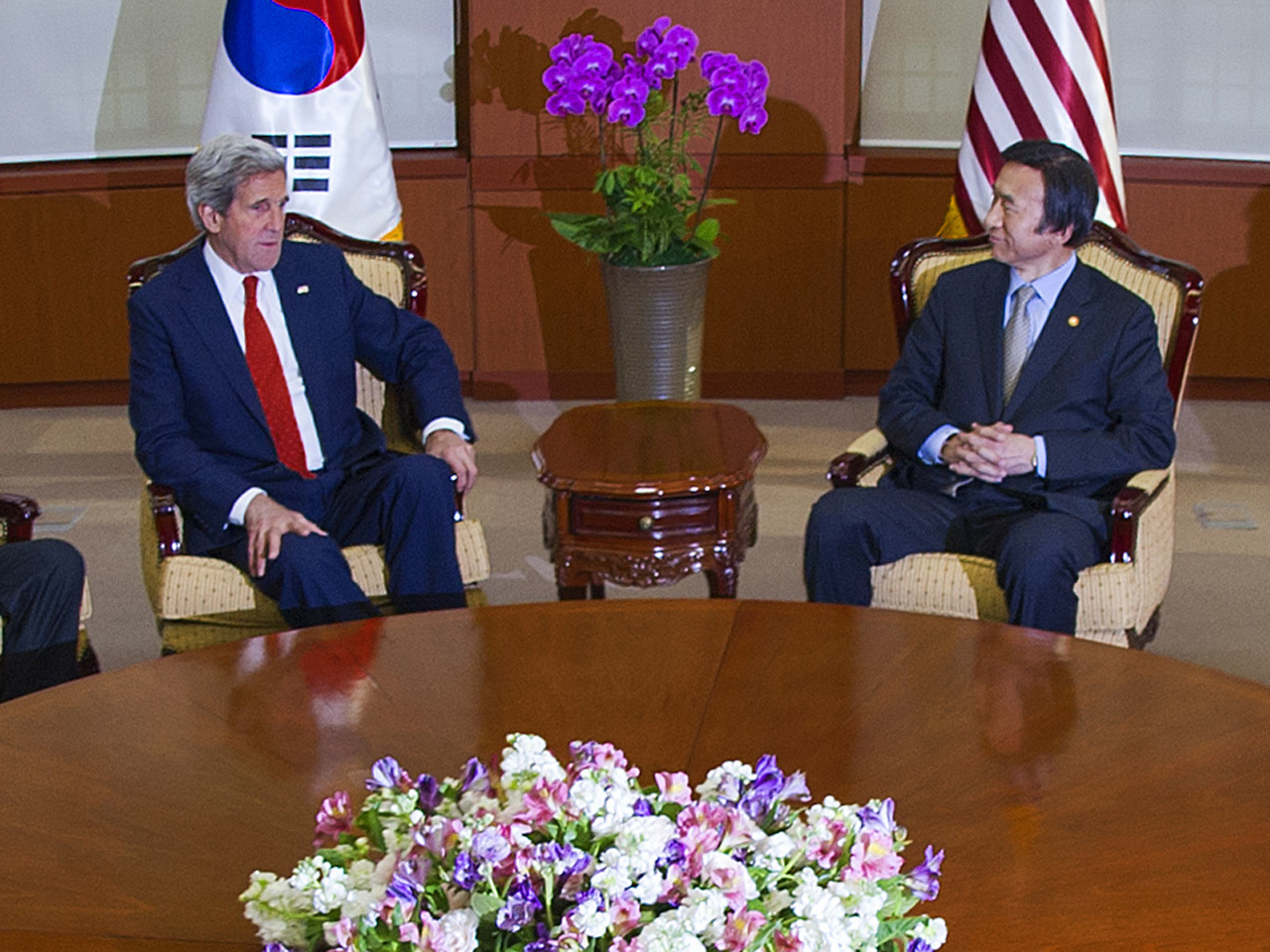 Appearing Friday at a joint news conference with South Korea's foreign minister, Kerry said the United States would not accept the North as a nuclear power, adding that the war-like rhetoric of the Kim Jong-Un regime is unacceptable.

"We are all united in the fact that North Korea will not be accepted as a nuclear power," Kerry said. "The rhetoric that we're hearing from North Korea is simply unacceptable."

Kerry arrived in South Korea on a diplomatic mission to lower rising tensions in a region bracing for a possible North Korean missile launch or nuclear test. It marked the kickoff of four days of talks in East Asia amid speculation that the North's unpredictable regime would launch a mid-range missile designed to reach as far as the U.S. territory of Guam.

The Secretary of State told reporters in Seoul that Pyongyang and its enigmatic young leader would only increase their isolation if they launched the missile that American officials believe has a range of some 2,500 miles -- or enough to reach the U.S. territory of Guam.

"If Kim Jong Un decides to launch a missile, whether it's across the Sea of Japan or some other direction, he will be choosing willfully to ignore the entire international community," Kerry told reporters. "And it will be a provocation and unwanted act that will raise people's temperatures."

Kerry said the test would be a "huge mistake" for Kim.

Within hours of Kerry's arrival, Pyongyang issued a warning that Japan, a U.S. ally, will be the first target if war breaks out on the Korean peninsula.

Kerry's trip coincides with the disclosure of a U.S. military intelligence report that concluded North Korea has advanced its nuclear know-how to the point that it could arm a ballistic missile with a nuclear warhead. The analysis, disclosed Thursday at a congressional hearing in Washington, said the Pentagon's intelligence wing has "moderate confidence" that North Korea has nuclear weapons capable of delivery by ballistic missiles but that the weapon would be unreliable.

Pentagon spokesman George Little said afterward, however, that "it would be inaccurate to suggest that the North Korean regime has fully tested, developed or demonstrated the kinds of nuclear capabilities referenced" at the congressional hearing.

James Clapper, the director of national intelligence, said he concurred with Little, and noted that the report alluded to at the hearing was compiled by the Pentagon's Defense Intelligence Agency and was not an assessment by the entire U.S. intelligence community. "Moreover, North Korea has not yet demonstrated the full range of capabilities necessary for a nuclear armed missile," he said.

Speaking Friday in Seoul to journalists traveling with Kerry, a senior U.S. official said it would be "premature" to say the North Koreans had gained the ability to miniaturize a nuclear weapon sufficiently to mount it on a ballistic missile. CBS News correspondent Margaret Brennan said the official described the process of miniaturization as a "very, very difficult task."

On Friday White House spokesperson Jay Carney also said that it is the administration's assessment that "North Korea has not demonstrated the capability to deploy a nuclear-armed missile."

South Korea agrees that Pyongyang does not yet have a nuclear device small enough to put on a missile, Defense Ministry spokesman Kim Min-seok said Friday, in response to a question about the DIA assessment.

"Our military's assessment is that North Korea has not yet miniaturized" a nuclear device, Kim said.

President Obama on Thursday urged calm, calling on Pyongyang to end its saber-rattling while sternly warning that he would "take all necessary steps" to protect American citizens.

Kerry's trip marks his first foray to the Asia-Pacific as America's top diplomat, spearheading the effort to "pivot" U.S. power away from Europe and the Middle East and toward the world's most populous region and fulcrum of economic growth.

It comes on the heels of months of provocative action and war-like rhetoric from Pyongyang, including talk of nuclear strikes against the United States -- however outlandish analysts consider such threats. No one is discounting the danger entirely after tests of a nuclear device and ballistic missile technology in recent months.

The U.S. official in Seoul told reporters that current anxiety was pegged to North Korean leader Kim Jong Un's youth and inexperience, which make him "very vulnerable to miscalculation."

Asked, however, whether the U.S. government believed war on the Korean peninsula was imminent, Brennan said the official responded decisively: "Not at all."

Kerry's trip was planned well in advance of the latest danger to destabilizing the Korean peninsula: North Korea's apparent preparations for another missile test in defiance of United Nations resolutions. The crisis clearly has overtaken the rest of his Asian agenda.

The Obama administration believes North Korea is preparing for another missile test, said a senior State Department official traveling with Kerry on the plane to Seoul. "We will show to our allies that we are prepared and we will defend them," the official said.

To mitigate the threat, however, Kerry is largely depending on China to take a bigger role in pressuring North Korea to live up to previous agreements to halt its nuclear and ballistic missile programs. It's a strategy that has worked poorly for the U.S. for more than two decades.

Beijing has the most leverage with Pyongyang. It has massively boosted trade with its communist neighbor and maintains close military ties. And the U.S. believes the Chinese could take several specific steps to show North Korea it cannot threaten regional stability with impunity.

These include getting China to cut off support for North Korea's weapons of mass destruction program, said the State Department official and another senior administration official, though they rejected that the U.S. was seeking a commercial embargo against the North.

The officials spoke on condition of anonymity because they weren't authorized to speak publicly about Kerry's meetings in advance.

Neither could say, however, whether Pyongyang under its enigmatic young leader, Kim Jong Un, was actually listening at this point. One of them stressed that he "wouldn't say there is no conversation between them," but declined to describe the level and impact of Chinese-North Korean contacts.

Kim's actual control of the country also is unclear, the official added. Now 29 or 30, the basketball devotee and product of a Swiss boarding school inherited power from his late father, Kim Jong Il, some 16 months ago and has seemed to lead his country on an increasingly reckless path toward possible confrontation.

That has led many observers and policymakers abroad to devote increasing time toward analyzing what little information they have on Kim to figure out how he can be mollified without being rewarded.

Kerry said on Friday any talks with North Korea have to lead toward denuclearization.

"They have to be really serious," Kerry said. "No one is going to talk for the sake of talking and no one is going to play this round-robin game that gets repeated every few years, which is both unnecessary and dangerous."