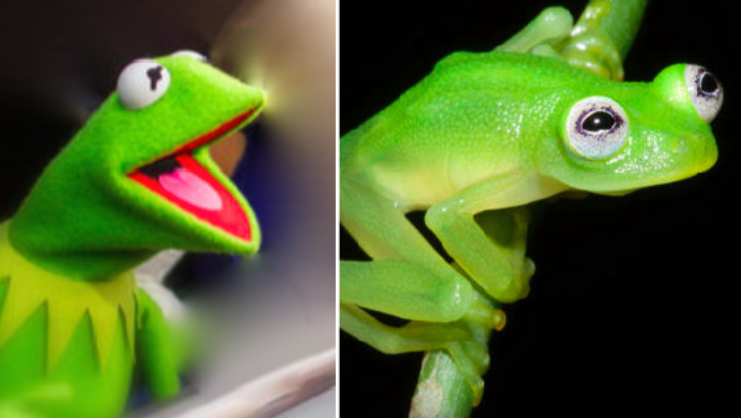 Earlier this week we told you about a remarkable discovery: A new species of frog discovered in the Costa Rican rainforest that looks remarkably like America's favorite amphibian, Kermit.

In a study published earlier this year in the journal Zootaxa, researcher Brian Kubicki described a new species of frog, Hyalinobatrachium dianae, with uniformly bright lime green skin and big white bug eyes with dark centers. Sound like anyone you know?

Disney released an official Q+A with Kermit the Frog Thursday, exploring his feelings about this newly discovered doppelgänger hopping on his celebrity.

Asked what he would tell Hyalinobatrachium dianae if he could tell him anything, the famous Muppet said, "Shorten your name if you want to make it in show business. Maybe something catchy like Diane Glass or Kermina Kardashian."

He also admitted that "Googly eyes run in our family."

In his research, Kubicki said that one of the things that most distinguishes H. dianae from other species of glassfrog is also part of why it took so long to discover.

"The advertisement call that the males of this species produce are very unique, no other known species of frog has a similar call, and this was indeed one of the traits that we used for the justification of it being a completely new species," he said. But because the call is so different - a long metallic whistle that sounds more like an insect than most other frogs - it "could have played a role in its going undetected prior."

Kermit said that the sound of his own call "depends on which ringtone I downloaded most recently. But my default call sounds like this: 'Hi ho!'"

The Muppet had a mixed reaction to the fact that H. dianae has translucent skin along its belly that allows for a surprising view of its insides:

"Being green is easy compared to being transparent. I thought that I blended in with so many other ordinary things. And that people tended to pass me over 'cause I wasn't standing out like flashy sparkles in the water or stars in the sky. But when you're transparent, folks really look right through you. It's almost like you're invisible .... which might come in handy around Miss Piggy. I take it back. I want to be transparent."

Kubicki told CBS News on Monday that he appreciates the (rainbow) connection between H. dianae and Kermit: "I think it is great that this species is getting so much attention around the world. Hopefully this will help increase the awareness of the incredible amphibians found in Costa Rica and the need to continue studying them and conserve their vital habitats."

Miss Piggy, on the other hand, is not being so magnanimous. "She's jealous," Kermit said. "Not about me being involved with another frog, she's just jealous that this new frog is getting more publicity than her."

$100M in artifacts shipped from Egypt, Turkey to U.S.