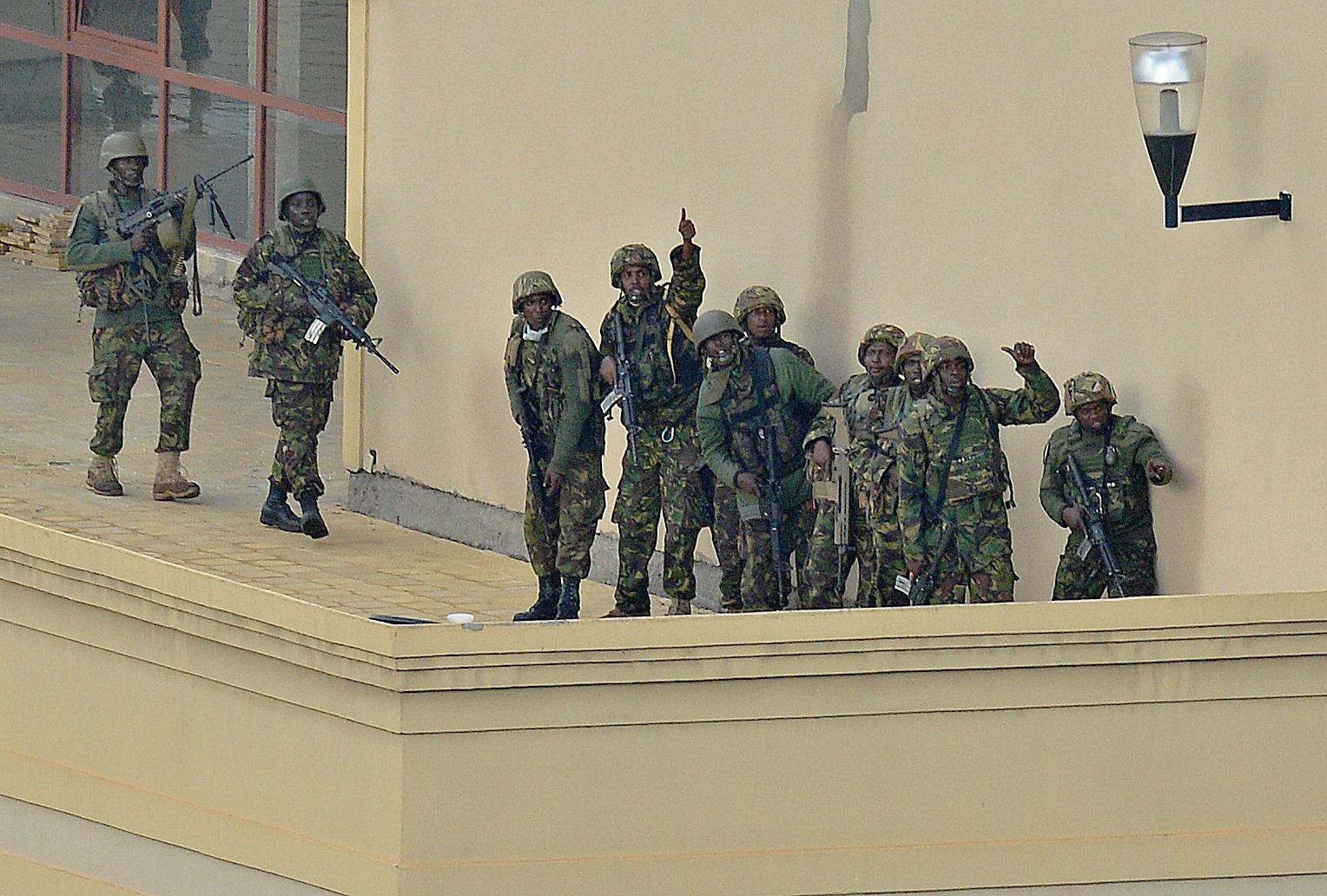 NAIROBI, Kenya Kenya's president proclaimed victory Tuesday over the al Qaeda-linked terrorists who stormed a Nairobi mall, saying security forces had "ashamed and defeated our attackers" following a bloody four-day siege in which dozens of civilians were killed.

President Uhuru Kenyatta said the dead included 61 civilians whose bodies have been recovered so far and six security forces, while some 175 were injured, including 62 who remain hospitalized.

Three floors of the mall collapsed and several bodies were trapped in the rubble, said Kenyatta. His office later said a terrorist's body was among those in the debris.

Five other extremists were killed by gunfire, he said in the televised address to the nation.

He said 11 other suspects had been arrested; authorities had previously announced the arrest of seven at the airport and three elsewhere.

"These cowards will meet justice as well their accomplices and patrons, wherever they are," Kenyatta said. "Kenya has stared down evil and triumphed."

The Kenya Police took to Twitter after Kenyatta spoke:

Kenyan officials as early as Sunday evening began declaring near-victory over what they said were 10 to 15 attackers, some who wore black turbans and many with grenades strapped to their vests. But battles inside the shopping complex continued, straining the credibility of victory declarations.

Booming explosions on Monday collapsed a second-story parking garage down into a department store - blasts that lit cars on fire and sent dark plumes of smoke skyward for nearly two hours. Explosions continued throughout Tuesday, and the chatter of gunfire from inside the building could be heard. Fresh smoke rose from the building in the afternoon.

Fears persisted that some of the attackers could still be alive and loose inside the rubble of the mall, a vast complex that had shops for retailers like Bose, Nike and Adidas, as well as banks, restaurants and a casino.

Two Kenyan soldiers who had been inside the mall shortly before the president spoke said the operation was mostly over, but security forces were still combing the facility and had not definitively cleared all the rooms. They spoke on condition of anonymity because they were under orders not to speak to the media.

Another higher-ranking security official involved in the investigations said it would take time to search the whole mall before declaring that the terrorist threat had been crushed. That official also insisted on anonymity.

The Kenyan Red Cross had previously said 62 people had been killed, and it seemed certain that the number of confirmed deaths would rise as security forces search the building.

Nairobi's city morgue had already braced for the arrival of a large number of bodies of people killed, an official said.

Kenyan Red Cross spokesman Abbas Gullet said it was still not known how many more may be dead inside the building.

"It is certainly known that there are more casualties," he said.

Earlier Tuesday the attackers used social media to give accounts of the fighting inside the mall that conflicted with the government reports.

"There are countless number of dead bodies still scattered inside the mall, and the mujahideen are still holding their ground," the Somali rebel group al-Shabab said in one Twitter message considered to be genuine.

It added it still held hostages, who were "still alive looking quite disconcerted but, nevertheless, alive."

Kenyatta did not mention the fate of the hostages - if it was indeed true that there were still some being held - in his address.

Al-Shabab, whose name means "The Youth" in Arabic, said the mall attack was in retribution for Kenyan forces' 2011 push into neighboring Somalia. African Union forces pushed the al-Qaeda-affiliated group out of Somalia's capital in 2011.

"You could have avoided all this and lived your lives with relative safety," the group Tweeted Tuesday. "Remove your forces from our country and peace will come."

Kenyatta said "initial reports had suggested that a British woman and two or three American citizens may have been involved in the attack," but that "we cannot confirm the details at the moment.

He said experts were working to try and determine the nationalities of the terrorists.

Earlier, Kenyan Foreign Minister Amina Mohamed had said "two or three Americans" and "one Brit" were among those who attacked the mall.

A security expert with contacts inside the mall described the attackers as "a multinational collection from all over the world."

U.S. officials said they were looking into whether any Americans were involved. State Department spokeswoman Jen Psaki said Monday that the department had "no definitive evidence of the nationalities or the identities" of the attackers.

Britain's foreign office said it was aware of the Kenyan foreign minister's remarks, but would not confirm if a British woman was involved.

Al-Shabab, responding to a request from AP, denied that any women had attacked the mall, saying "these are just baseless rumors."

"We have an adequate number of young men who fully committed and ready to sacrifice their lives for the sake of Allah and for the sake of their religion," said the al-Shabab press office in what is thought to be an authentic email address.

More than two hours after Kenyatta's address, al-Shabab tweeted: "It's an eye for an eye and a tooth for a tooth."

The attack began on Saturday when an estimated 12 to 15 al-Shabab militants invaded the mall, wielding grenades and firing on civilians inside the complex, which includes shops for Nike, Adidas and Bose and is popular with foreigners and wealthy Kenyans.

The militants specifically targeted non-Muslims, and at least 18 foreigners were among the dead, including six Britons, as well as citizens from France, Canada, the Netherlands, Australia, Peru, India, Ghana, South Africa and China. Nearly 200 people were wounded, including five Americans.

A U.S. Embassy vehicle, identifiable by its numbered diplomatic license plate, arrived at the morgue on Tuesday. American officials have not confirmed the deaths of any U.S. citizens in the mall attack, but it appeared possible the Americans who visited the morgue - likely security officials with an agency like the FBI - could have been seeking information about one of the bodies inside.

The attack at the Westgate mall in Nairobi's Westlands neighborhood was the deadliest terrorist attack in Kenya since the 1998 al-Qaeda truck bombing of the U.S. Embassy in Nairobi, which killed more than 200 people.

An extremist Islamic terrorist force that grew out of the anarchy that crippled Somalia after warlords ousted a longtime dictator in 1991, al-Shabab is estimated to have several thousand fighters, including a few hundred foreigners, among them militants from the Middle East with experience in the Iraq and Afghanistan conflicts. Others are young, raw recruits from Somali communities in the United States and Europe.

For years, Minnesota has been the center of a federal investigation into the recruiting of fighters for al-Shabab. Authorities say about two dozen young men have left Minnesota since 2007 to join the group. Minnesota's Somali community is the largest in the U.S.

Somali President Hassan Sheikh Mohamud said the attack showed that al-Shabab was a threat not just to Somalia but to the international community.

Mohamed, the Kenyan foreign minister, said her country needs to work with other governments to fight the increasing terrorist threat and "much more with the U.S and the U.K., because both the victims and the perpetrators came from Kenya, the United Kingdom and the United States.

"That just goes to underline the global nature of this war that we are fighting," she said.

Reports that some of the attackers may have been Somalis who lived in the United States illustrate the global nature of the militant group, the Somali leader said in a speech at Ohio State University. "Today, there are clear evidences that Shabab is not a threat to Somalia and Somali people only," he said. "They are a threat to the continent of Africa, and the world at large."