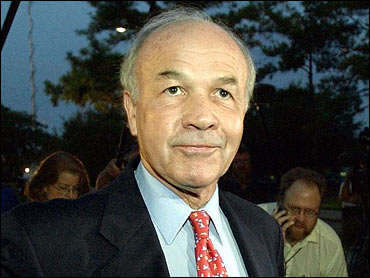 Federal prosecutors will need much more than the word of Andrew Fastow to convince a jury to convict former Enron Corp. chief Kenneth Lay of participating in an audacious scheme to deceive the government and investors of the failed energy company, private attorneys say.

Lay, who founded Enron in 1985, insists he was kept in the dark by Fastow, the former chief financial officer who pleaded guilty in January to orchestrating partnerships and financial ruses to conceal Enron's massive debt and inflate profits while pocketing millions for himself.

Fastow will be testifying for the prosecution at Lay's trial.

"I did not know what he (Fastow) was doing. He didn't share with me what he was doing," Lay told reporters Thursday outside the federal courthouse in Houston where he arrived in handcuffs and pleaded not guilty to 11 criminal counts including conspiracy, securities fraud and bank fraud.

That argument came as no surprise to CBS News Legal Analyst Andrew Cohen. "We suspected all along," says Cohen, "that Lay would argue in his own defense that he was unaware of what his underlings were doing at Enron and now clearly that defense is starting to unfold."

Lay's side will try to impugn Fastow's credibility as someone who cut a deal and would say anything to shorten his prison term.

Already on Thursday, one of Lay's attorneys called Fastow "obviously a liar and a thief."

"I suspect that mantra will be repeated over and over again between now and trial," says Cohen, noting that Lay's most likely defense strategy is to portray himself as another victim of the Enron collapse, or at least a victim of Fastow.

Unlike former president and CEO Jeffrey Skilling and ex-top accountant Richard Causey, Lay wasn't required to sign off on the byzantine deals and partnerships that Fastow hatched. The government wants to try the three together, but Lay's legal team is pushing for him to stand trial alone ahead of Skilling and Causey.

It will be "very, very tough" for Lay to get a separate trial because a conspiracy is being alleged, said Ronald Allen, a professor of criminal law at Northwestern University in Chicago. And Frederic S. Fox, a trial lawyer in New York, added that the prosecutors want a trial of the trio "so the jury would see the whole picture" from that perspective.

In the indictment released on Thursday and an accompanying civil complaint from the Securities and Exchange Commission, the government asserts that there is ample evidence to tie Lay to the company's collapse.

"Mr. Lay is being charged, not for where he sat, but for what he did. Mr. Lay is today a defendant not because he was a disengaged figurehead, but rather because he was an all-too-engaged participant in the fraud that was Enron," said Linda Thomsen, deputy enforcement director of the SEC.

Deputy Attorney General James Comey said in Washington on Thursday that "there's a presumption, as I think most of you know, in the federal system for joint trials. Those who are indicted together are tried together. That's not always the case, but in most circumstances. And we would expect that will be a joint trial here."

At the trial, Lay "is going to portray himself as as much a victim of this fraud" as any hapless Enron employee or shareholder, said Robert A. Mintz, a former Justice prosecutor and expert on white-collar crime. Lay will paint himself as "more glad-hander than bookkeeper," he said.

Once worth about $400 million, Lay says his personal wealth has been greatly reduced by Enron's collapse. He estimates his current net worth at less than $20 million.

Sherron Watkins, the Enron accounting executive who warned Lay in the summer of 2001 that the company's financial house of cards was set to collapse, has drawn a distinction between the roles of Lay and Skilling, his hand-picked protege. Watkins testified to Congress in 2002 that she believed that Fastow and Skilling "did dupe Ken Lay and the board."

Contrasting with other recent high-profile corporate cases, the government's case against Lay does not accuse him of personally profiting from a conspiracy within the company. Former Tyco International chief executive L. Dennis Kozlowski, for example, was accused of looting the company of hundreds of millions.

Lay has said he wants a trial by September.

"There is no way that is going to happen," says Cohen. "There simply are far too many working parts to even get close... I don't think Lay gets to trial until the middle of next year."

The location of the trial could also be an issue.

"It will be hard for Lay to get a fair trial in Houston," says Cohen, "given his profile there and how wide-ranging was the fall of Enron. I think if Lay's lawyers were to seek a change of venue, that request would be taken fairly seriously by a judge."

Enron's collapse was the first of a series of corporate scandals that led to Congress' passage of sweeping reforms to securities laws with the Sarbanes-Oxley Act two years ago. Thousands of Enron's workers lost their jobs, and the stock fell from a high of $90 in August 2000 to just pennies, wiping out many workers' retirement savings.

The company name has continued to splash newswires, most recently in a continuing series by CBS News Correspondent Vince Gonzales, who reported on taped conversations between Enron employees implicating the company in California's energy crisis four years ago.