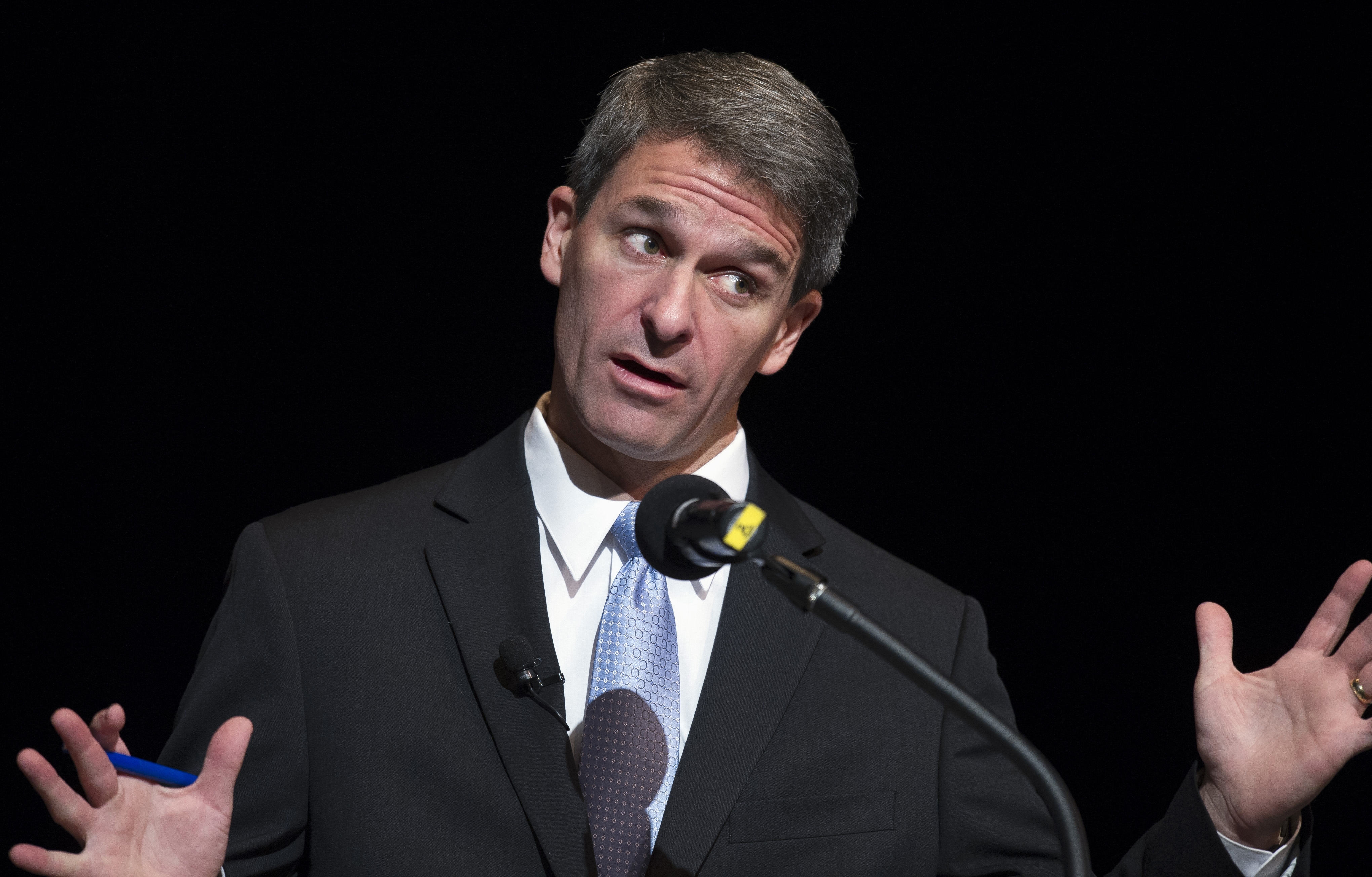 With less than three weeks until Election Day in Virginia, state Attorney General Ken Cuccinelli, the Republican nominee for governor in the commonwealth, pulled no punches about Obamacare in the weekly Republican address Saturday, calling the health-care law an "affront to our liberty" and vowing to continue the effort to overturn it.

Cuccinelli, an ardent conservative who has fallen behind his Democratic rival, Terry McAuliffe, in recent polling, made no mention of the recent government shutdown - a shutdown that hit Virginia particularly perniciously due to its proximity to Washington, D.C., and one that was sparked, in part, by Republicans' drive to gut Obamacare.

Despite a Supreme Court ruling to the contrary, Cuccinelli labeled the law "unconstitutional," and he touted his status as "the first attorney general in America to challenge the law in federal court."

He warned that the law is already forcing employers in Virginia to drop health-care coverage of employees and their dependents, citing the University of Virginia, which "just announced that it will no longer be able to provide health-care coverage to many spouses of their thousands of employees," and the Fairfax County Water Authority, which blamed the law's taxes for a recent decision to stop providing health coverage to employees.

"Everywhere you look, there's more evidence that Obamacare was fundamentally broken even before it started," Cuccinelli said.

He also criticized the recent implementation of the law's insurance exchanges as a "national embarrassment."

The exchanges got off to a rocky start on Oct. 1, when the website that processes the federal exchanges, healthcare.gov, was beset by frequent glitches that prevented people from expeditiously signing up for insurance. While the government has vowed to fix the problems well ahead of Jan. 1, 2014, when insurance coverage begins for many on the exchanges, many of the problems persist more than two weeks after the website's launch.

In place of Obamacare, Cuccinelli called for "market-based solutions" that "empower patients free of government control" and lower the cost of health-care coverage.

"We need to reverse the perverse incentives that have raised the cost of insurance premiums and have forced employers to drop health-care benefits and full-time jobs in order to stay in business," he said.

In his own weekly address on Saturday, President Obama looked past the government shutdown to his agenda in the months ahead, repeating his call for Congress to take up a farm bill, an immigration bill, and the framework for a long-term budget agreement before year's end.

"The way business is done in Washington has to change," he said. "Now that these clouds of crisis and uncertainty have lifted, we need to focus on what the majority of Americans sent us here to do."

On the budget, as he has for years, the president stressed the need for a "balanced approach" that both cuts spending and closes targeted tax loopholes to raise revenue. "This shouldn't be as difficult as it has been in past years," he said. "Remember, our deficits are shrinking - not growing."

On immigration, he touted the bill the Senate passed in June with bipartisan support, calling on the House to follow suit. "The majority of Americans thinks this is the right thing to do," he said. "It can and should get done by the end of this year."

And on the farm bill, a routine congressional agenda item that has nonetheless become mired in ideological strife this year, Mr. Obama called for a piece of legislation "that America's farmers and ranchers can depend on, one that protects vulnerable children and adults in times of need, and one that gives rural communities opportunities to grow and the longer-term certainty they deserve."