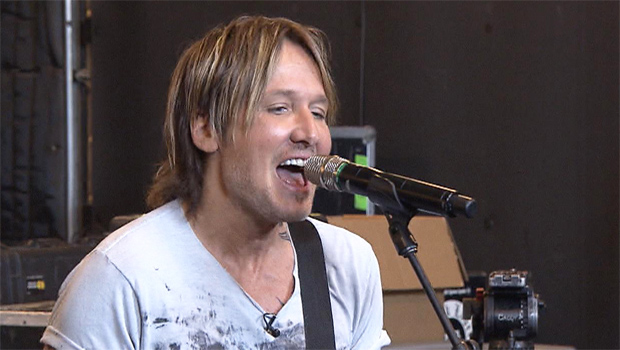 Keith Urban is one of the biggest names in country music. How Urban comes up all with those country hits is one of the things he'll share now with John Blackstone ... FOR THE RECORD:

At his rehearsal studio in Nashville, Urban is getting ready for a world tour that begins in June.

"The funny thing is, you know, you have these songs, you've written them, we've recorded them and we've never played them live," Urban said. "You get out on the road and you play stuff and it's amazing how much stuff in theory just doesn't work in practice."

The new songs are from a new album, "Ripcord," just out last Friday. Singles released early have already landed at the top of country charts.

To hear Keith Urban perform "Wasted Time," from the album "Ripcord," click on the player below.

And with four Grammys to his name, Urban has a deep reservoir of hits stretching back 16 years.

It's one reason he tours with nearly two dozen guitars.

"We have songs in our set list that we've played for a lot of years," he said. "And sometimes for me as a guitar player, if I just play a different guitar, it can become a slightly newer song. You play differently and you're engaged."

"And there's certainly those songs that you've got to play over and over?" asked Blackstone.

"That we GET to play over and over again! Thank goodness, people still want to hear 'em, exactly!"

It's hard to believe that Urban, who is 48, could be any happier than when he has a guitar in his hands.

When his wife, Nicole Kidman, dropped in, she gave us some insight into his songwriting.

"He will have worked all day and he'll come home and go, 'I haven't got the song,' and then suddenly the song will come together," she said. "And he'll be writing, and music is so much a part of our family now. The great thing about being artists and being -- I'm an actor, and he's a musician/songwriter --"

"I was aware of that," Blackstone said.

"A lot of people may not be!" she laughed, then continued, "-- that you have an innate understanding of what it takes to do the work, especially if you want it to be authentic and true."

They've been married ten years, and have two daughters. Kidman said she and their children will join Urban on tour this summer. "We'll be out there dancing. We like dancing!"

Some of his new songs were written in London last year, while Kidman was starring in the play, "Photograph 51."

Kidmnan said, "For me, deciding to go back on stage was inspired by him when I see him perform, because it's like -- well, it's like extraordinary love coming from the audiences. And I see what he gives and what they give back, and it's really beautiful energy."

Urban added, "Oh my gosh, that moment when it's all one, it's amazing!"

He began performing as a teenager growing up in Australia. His parents, Bob and Marienne, were big fans of American country music.

Urban said that when he quit school at age 15, his parents "totally got it. Well, you know it's hard because I get asked by parents all the time, 'Do you have advice for my kid?' I can't advise anybody anything; everyone's got to find their path. But because I was playing in a band on the weekends, and the band would play without me during the week. And because I'd been playing guitar since I was six, [my parents] could see, this is what I'm going to do, and I was willing to work. My mom and dad both, strong work ethic."

"Your father was a drummer, lots of music in the family. But you didn't read or write music in a traditional way?" Blackstone asked.

"No, I failed music at school, which was a real drag!" Urban laughed. "'Cause it's all theory-based, and I wasn't theory-based. I just learned by ear, I got taught a basic chord, and then another basic chord, and it was just like monkey see, monkey do. That's sort of how I learned."

At the famed club 12th & Porter, Urban said, "I really wasn't prepared for how hard it was gonna be, how long it was gonna take."

Blackstone said, "A lot of stress, part of challenge along the way, you said you didn't start drinking until your twenties but then you made up for it?"

"You got through that once, you met Nicole -- then you almost blew it?"

"Yeah, I had to surrender a lot to struggles I had, and get help with that, and just be willing to recognize that I was an alcoholic, simple as that," he said.

Kidman's support was crucial in his recovery.

"Meeting her and getting married wasn't life-changing, it was life-beginning," Urban said. "It was literally like, 'Okay, now life starts.'"

"When you go and see Keith live, that's when you really get to know him," Kidman said. "And you see the musicianship, I mean it's extraordinary, and I know nothing about guitar other than I like how it sounds."

"I know nothing about acting!" Urban offered.

"So we are a good match!" she laughed.

Urban says he can still almost hear his dad keeping the beat when he's writing a song.

Blackstone asked the proverbial question: "Does the music come first? Do the words come first?"

"I hope ANYTHING comes, really!" Urban laughed. "Anything, I'll grab anything. You know, my dad was a drummer. Rhythm is such a deep part of my whole being, really."

When Blackstone joined him in the recording studio, Urban used his "ganjo" (a six-string banjo) to show how a song comes to life from a bit of rhythm and a few chords.

"And then everything starts to sort of dance together, and melody comes. So we just start playing that and that might just go forever, you know, and you're just sorta diggin' on it, you're just sorta in the zone, it's like a trance. Things will come."

"It's interesting how songs can sort of evolve so rapidly from things that are spontaneous," Urban said.

His influences often come from far outside country music. He seems as comfortable with Aerosmith and the Rolling Stones as with any star from Nashville.

On his new song, "Sun Don't Let Me Down," he worked with Nile Rodgers, who has been producing hits since the days of disco. Then he invited "Mr. Worldwide" -- the rapper Pit Bull -- to join in.

"It was one of those moments where I thought, he would be really good on that song," Urban said. "Luckily, he loved the song. He did something on it, the next thing we knew ... he's suddenly all over the song!"

Time is money and I ain't wastin' no time
So, fill my cup up with Voli, water and lime
Take a shot for the soldiers in the field
Thanks for the freedom and that's for real.

"I love the fact that those things can just sort of organically happen through hearing and thinking and putting things together," he said.

The one dark cloud recently in Urban's life was death of his father in December.

Blackstone said, "It's a tough thing to lose a parent."

"Yeah, very much. I'm grateful that he got to see the field being fruitful, so all of the support and work that he put in, he could see it. He saw me happily married, and all the things I think, as a parent, you want to see from your kids."

Urban's music often takes country in new directions. He's made a signature of a driving sound that aims to lift people up and make the most of every minute.

"I've always had that feeling -- I have for many, many years - that everything is now. This is all there is, is now. In the moment."