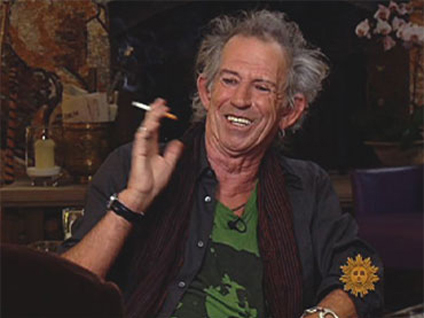 Keith Richards has been putting his signature riffs onto Rolling Stones albums for close to half a century. Now at last he's putting his personal recollections between the covers of a book. Anthony Mason has a Sunday Profile:

It's sometimes said there are two Keith Richards:

"Do you ever feel there's this other guy, the mythological Keith Richards, who's kind of trailing around alongside of you?" Mason asked.

"He's, you know, he's on the ball and chain," Richards laughed. "There's an image - it carries a long shadow. Yeah, I love the guy dearly. But I'm still trying to figure out who the hell he is."

He is "Keef" to his fans . . . once dubbed the "world's most elegantly wasted human," survivor of countless drug busts. Lead guitarist of the biggest rock band on the planet. And one-half of Jagger & Richards, one of the most successful songwriting teams of the past half century.

"How would you describe your professional partnership?" Mason asked.

"I've never considered myself or him professional, quite honestly," he laughed.

And then there's, well, the other Keith - a very traditional guy. "Yes! That is what I keep trying to tell everybody."

That's the one we met in Connecticut, at the house he built 20 years ago to raise his two daughters with his wife, Patti Hansen.

At home, he's the 66-year-old guitarist with the green thumb, growing lemons like "hand grenades." "Yeah, it's amazing really, isn't it? This is in my spare time, I do this."

But then you realize the two Keiths . . . are really one:

"I always planted things. I used to grow weed, but I was never there for the harvest, ya' know?"

If Keith Richards didn't exist, one critic wrote, rock and roll would have to invent him. And in a way it has.

In his new memoir, "Life," he dispels some of the myths, like the legendary tale he once had a total blood transfusion in Switzerland:

"Yes, I created that myth, Because people wanted to believe that, ya know? No, I wouldn't swap this blood for nobody's!" he laughed

And he confirms others, like the snorting of his father's ashes:

"True! I ingested my ancestor, yes."

It was an accident, he says. He planned to bury his father's ashes beneath an oak tree he was planting:

"But as I took the lid off the box, fine bits of my Dad flew onto the table, you know, like powder. And honestly I could not resist. I just scooped him up there, took out a straw and, 'See ya, Dad!' (sniffs) And I did a little line of him. Yeah. I did that.

"And the rest of him is around this oak tree, which is growing incredibly well."

Bert and Doris Richards' only child grew up in Dartford, a working class suburb of London. His grandfather, a weekend musician, loved to take "Ricky," as he was called, to music stores:

We took Keith to the Carmine Street Guitar Shop in New York, where owner Rick Kelly still makes guitars by hand in the back room.

Keith used to spend hours in shops like this in London's theater district.

"And I would just sit there like the sorcerer's apprentice or something, ya know?" Watching instruments being made, repaired, the smell of the glue.

"So they'd be like repairing stuff for the pit orchestras, and you'd see those little Italian guys with, you know their dickies or their collars, all of that, rushing 'My violin! My violin!'"

Richards would meet another kid with a passion for rhythm and blues at the Dartford train station: Mick Jagger.

He wrote about the encounter in an April 1962 letter to his aunt: "Mick is the greatest R&B singer this side of the Atlantic. And I don't mean maybe. I'm playing guitar Chuck style."

A few months later the Rolling Stones were born. Their debut album would knock the Beatles off the top of the British charts.

Jagger and Richards emerged as the songwriters. Mick came up with the lyrics; Keith delivered the riffs.

"Does this stuff just sort of pop into your head at some point?" Mason asked.

"You know, they pop off the fingers actually, more than the head,' Richards said.

The Stones swaggered through the Sixties as rock's irreverent bad boys, and the shy Keith became an unlikely icon, with a buccaneering attitude that said he was ready to try anything and apologize for nothing:

"I see you're still smoking," Mason said. "How many vices do you have left? You've sort of whittled them away over the years."

But he doesn't miss them: "Not really. Because I've done - you can't go back and - I mean, God, I used to love heroin," he laughed. "But what junkie didn't?"

Keith seems to be the only one who isn't surprised he's still here: "I have an amazing … constitution. An incredible system, an immune system. And so, you know, I've always known. But it's convincing other people is the hard bit."

Richards once said that the reason he took drugs was to hide.

"Yeah, it's to get away from the flim flam," he said, "from all of the unnecessary things about show business that seem to be important to show business people, that I never really thought myself part of."

Busted repeatedly over the years, Richards once said: "I didn't have a problem with drugs, only with policemen."

But he has no regrets. And when asked what was the toughest thing he's faced, he answered, "My son dying. Two months old, I'm on the road and I get the phone call - 'Your son's dead.' That's the toughest thing. I don't really wanna go there too much."

In 1976, Tara, his third child with Anita Pallenberg, was found dead in his crib.

"Yeah, supposed to be there, right? But I wasn't there."

By the end of the decade, Keith had finally cleaned up his act. But for much of the Eighties the Stones did not tour.

Jagger wanted to go off on his own, and Richards felt betrayed.

"You were pretty tough on him during that period," Mason suggested.

"No, he was pretty tough on me, as far as I'm concerned. I mean, I'm leaving.' You know? 'Oh thanks, Pal.' He had set himself a separate agenda that didn't include any of us, and riding on the Stones' fame to do it. And I thought that was a cheap shot."

"In the book, you basically say, 'We're not really friends anymore but we'll always be brothers.'"

"Yeah," Richards said. "The reason I say that probably is that we don't see a lot of each other when we're not working."

"Do you wish you still did?"

"I would prefer us to be closer as guys. But I don't like to socialize the way Mick does

"But," Richards adds, "Mick probably finds me far too serious and idealistic."

Mick & Keith - "It's like a marriage, with no divorce," Richards once said. Their child is the Rolling Stones:

"There is a certain chemistry between Mick and myself that just clicks," he said. "You don't know quite how. And sometimes it doesn't. I mean, there's many times I think, 'Mick, I've got the greatest riff ever for you.' And he goes, 'Oh, I hate it.'"

"Obviously you have to believe in that chemistry 'cause you keep going back to it," Mason said.

"Oh yes, I know, I do. My job is to turn Mick on. If I can turn Mick on, then Mick can turn the world on. But something has to spark him."

Working on his memoirs has kept Richards at home for much of the past few years . . . and he;s getting a road itch: "I'm starting to feel an itch but it depends who's gonna scratch, you know?"

"And you've all got to scratch together, don't you?"

Keith Richards is ready to start collecting material for "volume two" of life.