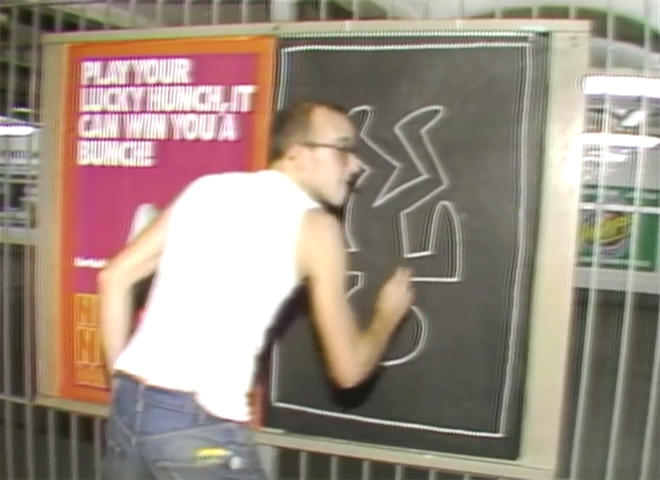 Charles Osgood meets the graffiti artist whose paintings are taking Soho by storm. [This story was originally broadcast on “The CBS Evening News” on October 20, 1982.]

He stalks the New York City subways waiting for his chance to strike. When the opportunity comes, he moves fast. He has to.

Opportunity for Keith Haring is a blank advertising poster. Using a piece of chalk, the young man from Kutztown, Pennsylvania, draws a picture -- a cartoon-like drawing which he finishes in a minute or two, and then moves on.

He may do as many as 30 such drawings in a day. All different, but all the same in certain ways.

He puts them down here so that millions can see them. And millions do.

“You don’t have to know anything about art to appreciate it or to look at it,” Keith Haring said. “There aren’t any hidden secrets or things that you’re supposed to understand.”

But he’s got to be careful because technically what he’s doing is illegal graffiti. He could be arrested. Sometimes he IS arrested!

“You’re under arrest for graffitiing the subway,” the officer said.

Haring doesn’t think he is defacing anything. He believes it is art, and many subway riders seem to agree. But the law is the law.

For Haring, the arrest is always short-lived, and it’s worth the temporary humiliation for him, because he wants ordinary people, subway riders, to see his stuff.

Is it art? Well, upstairs, outdoors, there doesn’t seem to be any question about it.

He’s done murals like this one on the Bowery:

And you’ll often find Haring working on paintings that look for all the world like those subway drawings. For all its size, one only took him a couple of hours to do. Here, too, he works fast.

“I think it’s more important to make a lot of different things and keep coming up with new images and things that were never made before, than to do one thing and do it well,” Haring said. “They come out fast but, I mean, it’s a fast world.”

And so fast has Keith Haring caught on in this fast world, that now he has a one-man show at a gallery in Soho. Here are the same images: the cookie-cutter man, babies, hearts, dolphins and spaceships. Only now it is the art world looking on.

They think it’s art, all right!

“Beautiful show. I can’t get over it,” one man said.

Haring has become a hot property. They “ooh” and they “ahh.”

“Unbelievable! I want to buy a few of these little booty things,” one man said.

And they pay plenty. $15,000 for that two-hour special we saw him working on. Within the first few days of the show, about a quarter of a millions dollars’ worth of his pieces sold.  Not bad for a 24-year-old kid from Kutztown.

But even though he now gets fancy prices for a lot of his work, still every chance he gets it’s back down into the subway system, looking furtively around to make sure the coast is clear, and then going to it.

Art for the people -- all for the price of a subway token.

Note: Keith Haring died in 1990 of complications related to AIDS.