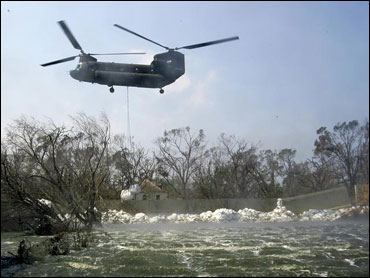 Despite billions of dollars to boost disaster preparedness at all levels of government, the response to Katrina was plagued by confusion, communication failures and widespread lack of coordination, said Senate Homeland Security Committee chair Susan Collins, R-Maine.

"At this point, we would have expected a sharp, crisp response to this terrible tragedy," Collins said. "Instead, we witnessed what appeared to be a sluggish initial response."

Meanwhile, the husband-and-wife owners of a nursing home are facing homicide charges for not evacuating 34 elderly patients who later died in Hurricane Katrina's floodwaters. The arrests of Salvador and Mable Mangano mark just the beginning of attempts by prosecutors to hold those responsible for the New Orleans tragedy accountable.

The Louisiana attorney general's office said all of its investigators have been pulled from other tasks to work on the Medicaid Fraud Unit, the team whose work led to the arrests Tuesday of the owners of the St. Rita's nursing home in Chalmette. Medicaid is the government's health-care plan for the poor.

The hearing marked Congress' first step in investigating major gaps in the country's readiness and response systems that Katrina exposed. It comes as Republican and Democrats continue debate over whether to appoint an unusual House-Senate panel to investigate the matter, or to create an independent commission much like the one that examined government missteps that led to the Sept. 11, 2001, terror attacks.

Sen. Joe Lieberman of Connecticut, the top Democrat on the committee, said the response to Katrina "has shaken the public's confidence in the ability of government at all levels to protect them in a crisis."

Lawmakers said they did not ask officials from the Federal Emergency Management Agency or the Homeland Security Department to appear at the hearing out of fear that would disrupt the ongoing recovery process in the battered Gulf Coast. Instead, a slew of former city and state officials testified about their experiences in facing faced major disasters in their communities.

"They are in low land. They had evacuated before. They knew they should have evacuated. They should have used their evacuation plan and moved those patients to safety," Louisiana Attorney General Charles Foti said Wednesday on CBS News' The Early Show.

They also turned down an offer from St. Bernard Parish officials who asked if the nursing home wanted help evacuating, he said.

"They were given the opportunity to move. They also had a contract with an ambulance to move the patients. They did not move the patients. And that resulted in a loss of 34 lives," Foti told co-anchor Harry Smith. "These are patients that are in wheelchairs, walkers, and cannot take this type of action and they drowned."

The Manganos were released on $50,000 bail each; each of the 34 counts against them carries up to five years in prison. Their attorney, Jim Cobb, said his clients were innocent and had waited for a mandatory evacuation order from the officials of St. Bernard Parish that never came.

The attorney general is also investigating the discovery of more than 40 corpses at flooded-out Memorial Medical Center in New Orleans. A hospital official said the 106-degree Fahrenheit heat inside the hospital as the patients waited for days to be evacuated likely contributed to their deaths.