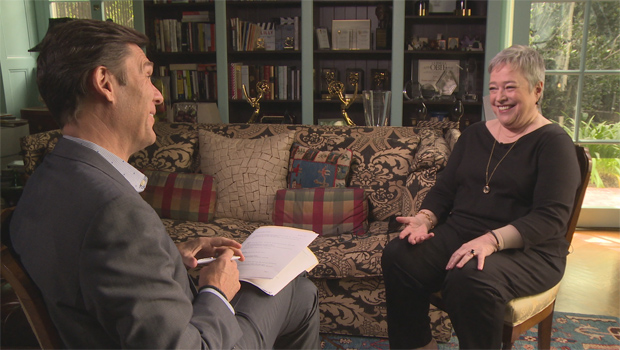 In a rarity for Hollywood, Academy Award-winner Kathy Bates invited CBS' "Sunday Morning" for a visit to her doctor as she battles Lymphedema, a debilitating and potentially disfiguring condition stemming from her breast cancer surgery in 2012.

The disease is the result of doctors removing 19 lymph nodes during Bates' double mastectomy. Now, excess fluid collects in her arms, requiring her to wear a compression sleeve to minimize swelling.

"I went berserk, I went nuts," Bates tells correspondent Lee Cowan, of being diagnosed with the chronic disease. "And for a long time after that, I was really, really angry. I just turned into another person. I just felt betrayed, I felt enraged."

And Lymphedema is hardly rare; as many as 10 million people suffer from it in the U.S. alone.

Today, Bates manages the disease with regular visits to her doctor, and has since become a spokesperson for the Lymphatic Education & Research Network, so she can help others.

"I didn't know what I was saying yes to and the more I learn about it, the more angry I am," Bates says. "I feel I have to do something about it. If I can use my celebrity for something real, then that's what I want to do."

Cowan's interview with Bates will be broadcast April 17 on "Sunday Morning."

In addition to opening up about her own health battle, Bates talks about her long career in Hollywood, her childhood, and the doubters who said she wasn't attractive enough to make it as an actress. She says she was told her upper arms were too heavy and that she had a more "maternal" look, so she wouldn't make it until she was older.

The criticism stung, she admits. "Yeah, yeah, that hurt my feelings a lot," Bates tells Cowan. "But it all kind of turned out to be right."

Bates' breakout role came in 1990 playing the deranged Annie Wilkes in "Misery." She was 42.