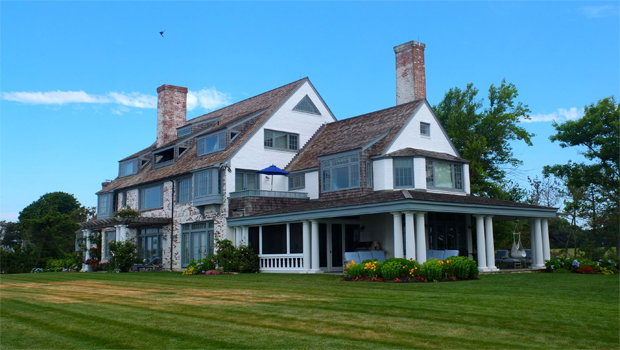 Katharine Hepburn's link to this seaside spot in the Fenwick section of Old Saybrook, Conn., was very nearly lifelong.

And what a long and eventful life it was.

Born to a prosperous and socially-progressive Hartford couple in 1907, Hepburn's memories of their summer retreat went way back:

Hepburn caught the acting bug as a college student, and by the 1930s was enjoying success way out in Hollywood.

But then came the setbacks. Her beloved house on the Connecticut shore was smack-dab in the way of the Great Hurricane of 1938.

"Our house actually turned around and sailed away," she said. "Everything gone except a bathtub and a toilet. Digging in the mud and sand, we found most of mother's silverware and her tea service,"

As bad as it was, it wasn't bad enough to move. The family rebuilt, a bigger, better home -- three feet higher. "It should have been 11 feet higher, we'd still get flooded," Hepburn laughed.

Along with rebuilding the house, Hepburn was rebuilding her career. Her sometimes brash and outspoken ways had so alienated movie audiences that by the late 1930s, Hollywood had taken to labeling her "box office poison."

She bounced back by starring in "The Philadelphia Story" on Broadway, and then she bought the movie rights.

Her role in the hit 1940 film opposite Cary Grant and Jimmy Stewart put her right back on Hollywood's A-List -- for good.

Next came "Woman of the Year" opposite Spencer Tracy . . . the first of nine films they made together, as well as the start of a secretive off-screen relationship that has since become the stuff of movie legend.

There were other films, of course, and other leading men . . . .everyone from Humphrey Bogart in "The African Queen," to Henry Fonda in "On Golden Pond."

All told, she was nominated for 12 Academy Awards, and won four -- still an Oscar record for an actress.

And she never showed up to accept any of those Oscars. In fact, she never stayed in Hollywood longer than necessary.

As she once said, "I'm a Connecticut girl." She always returned to the place where she found her privacy. Almost every weekend she would make the drive from New York. At the shore, Hepburn would tend to the flowers . . . go sailing and canoeing . . . just relax with a good book . . . or go for a swim, even in winter.

The rooms were cozy, once filled with an assortment of things she collected or was given by friends -- artifacts that are long gone now -- but her memory is everywhere. Pictures on the walls, books on the coffee table. We found her name scrawled in the concrete of the sea wall, just barely legible now.

A pillow with a saying credited to Katharine Hepburn rests on a coach: "If you obey all the rules, you miss all the fun."