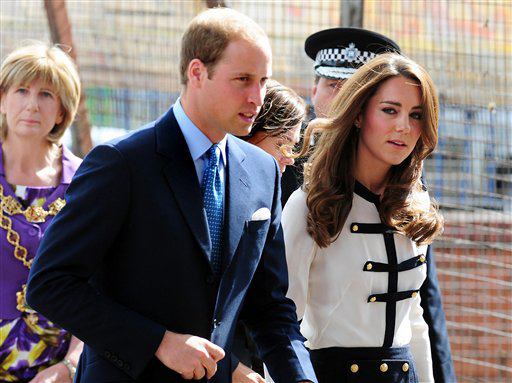 (CBS) We have seen it plenty of times before -- headlines claiming that Kate, Duchess of Cambridge, is pregnant, or at least hoping to start a family soon with Prince William.

The latest report comes from In Touch Weekly, and this time the magazine is citing a well-placed royal source, who says Kate is six weeks pregnant.

"The source has accurately revealed other details about the royal family -- the queen's wedding gift to Kate and the location of the royal couple's honeymoon," In Touch Senior Editor Dorothy Cascerceri tells CBSNews.com.

The source says that Kate has been showing all of the tell-tale signs of pregnancy - from complaining about feeling nauseous to getting sick at the sight of fish.

The royal couple, who got married in April, has reportedly already been thinking of names. "They want something traditional," the insider adds. "Edward, Philip and Michael are likely choices for a boy, or Alice or Rose for a girl."

"They are really excited because the Queen has been putting pressure on them to have a baby," Cascerceri says, citing the source.

In Touch isn't the only tabloid speculating about the pregnancy. This week's Us Weekly issue features the headline: "Will & Kate Ready For a Baby."

Although there hasn't been any confirmation from the royals themselves, the pregnancy buzz continues to build.

"I think hearing a baby is on the way makes everyone anticipate what the birth announcement and the baby shower will be like," Cascerceri says. "You know they're going to do everything over the top."