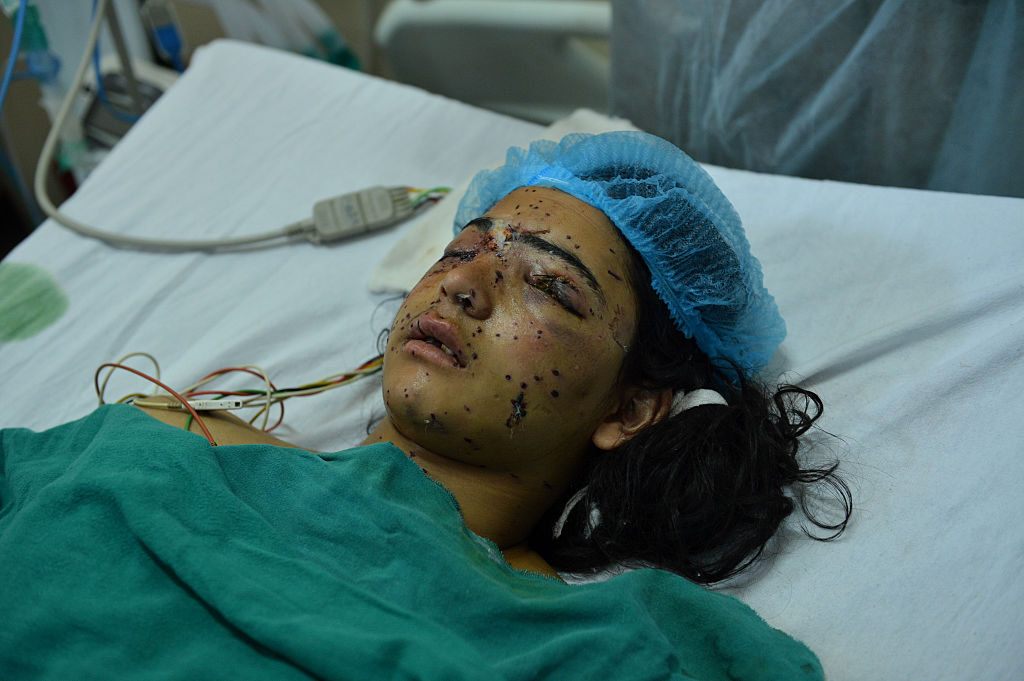 NEW DELHI -- Almost 45 people have been killed and more than 2,000 injured in 11 days of clashes between civilian protesters and Indian security forces in Kashmir.

Protesters in several districts of the Kashmir valley have defied a government curfew to throw stones at police and paramilitary forces. In response, the forces have used bullets, pellet guns and tear gas, leading to most of the deaths and injuries.

The police have come under heavy criticism from rights groups for the use of pellet guns to control the crowds. Children as young as five are among the 600 people left who've been left with pellet-scarred faces.

Doctors at the main hospital in Srinagar, the capital of Indian-controlled Kashmir, have performed 135 eye surgeries in a week. Many of those patients, doctors say, will lose their sight.

"The security forces are using pellets and bullets with an aim to kill, not contain the protests," Khurram Parvez, a Kashmir-based human rights activist, tells CBS News. "They beat up women and children. They use violence and fear as a weapon to engage with people with whom they should talk."

The protests erupted on July 9 after the killing of 22-year-old Burhan Muzaffar Wani, a commander of the Hizbul Mujahideen, a militant group fighting for largely-Muslim Kashmir's independence from India. Huge crowds attended Wani's funeral. Even before his death he had become something of a poster boy for the new era of militancy in Kashmir.

Kashmir remains the primary focus of animosity between majority-Hindu India and its neighbor, the Islamic Republic of Pakistan. There has been an armed insurgency along the disputed border for most of the past three decades, with rebels in India-administered Kashmir demanding either independence or a merger with Pakistan.

The unrest in the picturesque Himalayan valley, now in its 12th day, has become a renewed flashpoint between the two nuclear powered states.

Pakistan is observing a "Black Day" Wednesday to honor those killed in the violence, and its leaders have accused India of "atrocities, human rights violations and a killing spree of innocent people in Kashmir."

Indian officials, on the other hand, say Pakistan "extols" the "virtues" of terrorists and uses terrorism as a state policy toward the "misguided end" of coveting the territory of others.

"Mark my words; Burhan's ability to recruit into militancy from the grave will far outstrip anything he could have done on social media," wrote Omar Abdullah, the former Chief Minister of Jammu and Kashmir, soon after Wani's killing.

Police are now worried that Abdullah's prediction will pan out.

Kashmir saw similar protests in 2008 and 2010, when more than 100 civilians -- mostly teenagers and young men -- were killed by police during summers of unrest. Several reports have said Wani joined the separatists after facing harassment and torture by security forces during the 2010 protests.

Security experts believe this year's clashes may give rise to a new generation of angry young men in the region who are happy to step into Wani's shoes.

"Violence is the only means by which the Indian government has engaged with the people of Kashmir," said Parvez, the rights activist. "They need to engage people politically."