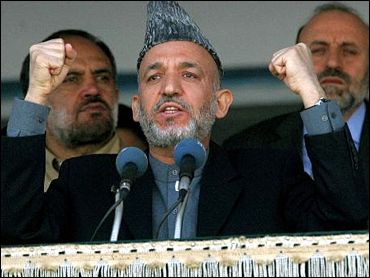 Hamid Karzai was declared the winner of Afghanistan's landmark presidential election, after investigators concluded Wednesday that a string of irregularities were too minor to overturn his triumph.

The country's joint U.N.-Afghan electoral board confirmed the American-backed incumbent had clinched a five-year term as the country's first directly elected leader.

"His excellency Hamid Karzai is the winner of the election," board chairman Zakim Shah said at a ceremony in the capital. "We are announcing the first elected president of Afghanistan."

Shah said Karzai won 55.4 percent support in the Oct. 9 election, 39 points clear of his closest challenger and enough to avoid a second round.

Still, Karzai's closest challenger, Yunus Qanooni, refused to concede defeat, raising the risk of political instability in a country slowly emerging from a quarter-century of war.

Meanwhile, militants threatening to kill three U.N. hostages pushed back their deadline until Wednesday midnight, and said they might spare a Filipino from execution because his country has no troops in Afghanistan.

The militants also urged the Afghan government to acknowledge it is in talks with the group — a new demand alongside the withdrawal of British troops and the United Nations from the country.

The U.N.-sponsored electoral board quickly approved a report by a panel of experts called in to investigate allegations of cheating, spokesman Sultan Baheen said.

The three-strong panel was called in after Qanooni and other challengers claimed massive fraud in favor of Karzai and threatened to boycott the results.

In its final report released Wednesday, the panel confirmed problems including ballot stuffing and with ink used to mark people's fingers to prevent multiple voting.

But it said there was "no evidence" that the problems were widespread, or that they favored only Karzai.

"There were shortcomings," Staffan Darnolf, a Swedish election expert on the panel, said at a news conference. "But they could not have materially affected the overall result."

Qanooni's running mate, Syed Hussein Alemi Balkhi, said the report was "unacceptable" but stopped short of saying that they would reject the election result.

"We had a lot of questions, but the panel was not able to answer them," Balkhi said. "We are not satisfied with their findings."

There was no immediate reaction from the camp of Karzai, who left Kabul Wednesday to attend the funeral of the late president of the United Arab Emirates.

Karzai, who will be inaugurated in early November, has vowed to accelerate the slow rebuilding of a country shattered by war and drought with the goal of doubling the income of ordinary Afghans by 2009.

But any attempt to focus on the economy will be complicated by the challenge of confronting warlords and drug traffickers even as a stubborn insurgency grinds on.

The size of his task — and the rancor surrounding the vote — has also been highlighted by an ongoing hostage crisis involving three foreign election workers.

Jaish-al Muslimeen, or Army of Muslims, released a videotape on Sunday showing the frightened captives pleading for their freedom.

However, Afghan officials suspect that warlords or criminal groups were also involved in the bold daylight snatch and have launched a search operation in the capital and surrounding countryside.

Akbar Agha, the group's purported leader, told The Associated Press on Wednesday that it had received a call from "the authorities."

"We will not contact them as it will look as if we are the ones who need talks. They will have to approach us," Agha said by satellite telephone from an undisclosed location.

"We want the Afghan government and the U.N. to officially declare that they are in contact with us," he said. "We have set 12 midnight as the deadline."