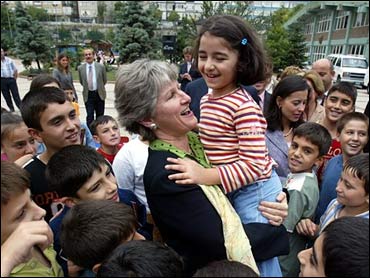 CBS News reporter Charles Wolfson is a former Tel Aviv bureau chief for CBS News, who now covers the State Department. He went along with Karen Hughes on her diplomacy tour of the mideast this week and filed updates for CBSNews.com.


"I was very cognizant this was a challenge. I'm energized."

Karen Hughes, the veteran political and media advisor and newly-minted diplomat, was on message and this was the impression she wanted to leave with reporters who traveled with her as she returned from her first trip abroad as head of the Bush administration's push to explain its policies to the Muslim and Arab world.

"I expected a lot of people to disagree with our policy and they did," said Hughes. She emphasized the need to "talk about tough issues" and "listen to them and explain our policies to them."

Hughes likes to talk — she prefers the word "communicate"— and it doesn't seem to matter much whether it's with prime ministers, foreign ministers, students, activists for women's rights, or kids. This week she attracted the kind of attention usually accorded a secretary of state, not someone who holds the rank of ambassador and the title of Under Secretary of State for Public Diplomacy.

Most officials of her rank fly commercially but Hughes traveled aboard a plane belonging to the D.C. Air National Guard, which often takes congressional delegations abroad. Hughes, her deputy, Assistant Secretary of State Dina Habib Powell, state department officials and sixteen members of the press went on a six-day trip to Cairo, Jeddah, Ankara and Istanbul which Hughes touted as a "listening tour."

In some respects, it was a trip similar to others taken by senior American diplomats. There were meetings with high government officials in foreign capitals, press conferences, and interviews with the local media.

Hughes, however, is not your ordinary senior American diplomat. As a longtime advisor to President George W. Bush and a former senior White House aide, Hughes returns to Washington to report not only to her boss, Secretary of State Condoleezza Rice, but also to Mr. Bush himself.

Because the relationship between Hughes and the president is so well known, it wasn't surprising she met with many officials above her rank — in Egypt, the prime minister; in Saudi Arabia, the king; and in Turkey, with the foreign minister.

But there was at least one official who apparently didn't get the word on his visiting VIP. In Jeddah, when Hughes paid a courtesy call on the Saudi Minister of Information, he greeted her by saying: "Tell me what you are seeking to hear… I'm not sure what it is." Hughes politely interjected "I'm really here to listen."

In other places some thought they knew exactly why Hughes was paying a visit. In Ankara, the newspaper Milliyet (The Nation) headlined a story on her visit: "Bush's Brain Trust Here to Capture Our Heart." "I expected a lot of people to disagree with our policy and they did," Hughes said at the end of the trip, her first to each of the three countries she visited.

Some of the meetings she had were public, others private. Time and again she heard some version of 'We like Americans, but we don't like America's policies in the region.'

Hughes asked one woman in Ankara if she was satisfied with the answer given to a question about why Mr. Bush decided to go to war in Iraq and was told "No, when the war is over I'll be satisfied." The woman, Hidayet Sefkatli Tuksal, representing the Capital City Women's Platform, also said " this war is really, really bringing all your positive efforts to zero."

Hughes regularly tried to involve Dina Powell, her chief aide and also a former White House official, into her discussions. Powell, who was born in Egypt, often spoke Arabic to various groups, but it was Hughes who carried the administration's message. In Jeddah, Hughes' appearance at Dar al-Hekma, a college for women, broke new ground. Senior State department officials traveling with Hughes said the fact that men and women were allowed to sit together in an auditorium to see and hear the exchange between the visiting American officials and several hundred young Saudi women was a first for the kingdom. Normally, the men would have sat in an adjoining room and watched the proceeding s on closed circuit television. One American diplomat posted there called the fact that it happened "shocking."

Hughes used a question and answer session with the students to encourage change and more freedoms for women, touching on such politically sensitive subjects as voting and driving, which women in Saudi Arabia are not now allowed to do.

Showing an interest in local culture was also part of the agenda. Hughes visited Bab Zweila, an archeological site in Cairo restored with the help of U S AID funds. As she looked out from the ramparts Hughes said "It's magical. A thousand minarets and thousands of satellite dishes." In Istanbul Hughes toured the Topkapi Palace and was followed closely by a small horde of reporters and still photographers. Tourists wanted to know who she was. Hughes also went to a school and presented kids with books written in English.

If there was an odd subtext to Hughes' trip it was her "I'm a mom" riff. At virtually every stop, in some form or other, Hughes said "I'm a mom" or "I'm a working mom" or "As a mother." Speaking to students at the American University Cairo she began speaking to several dozen students by saying "I'm really a working mom." Then the questions turned to Bush administration policy on Iraq, the Israeli-Palestinian issue, human rights and democracy.

Shibley Telhami, a Middle East analyst at the University of Maryland and the Brookings Institution, speaking before Hughes' trip, said part of the problem for her would be a lack of expertise in the region. He cautioned that "some people would tell her what she wanted to hear, to curry favor with the administration; and some people will criticize, no matter what. The trick is to find people in between."

"I think I did the best I could. I hope I'm an effective communicator," Hughes said on the way back to Washington. She knows changing minds is a long term proposition but she seemed content with the fact that she "opened the door to a conversation." The unanswered question is whether or not she found "the people in between."
Charles M. Wolfson