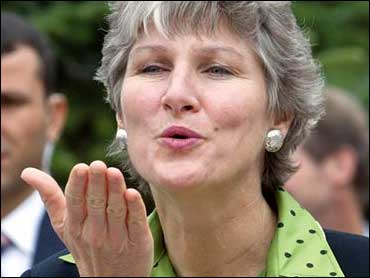 In March, President Bush's adviser Karen Hughes was named to a State Department post designed to change Islamic perceptions about America. Hughes is now touring the Mideast and CBS News State Department reporter Charles Wolfson is along and filing updates with CBSNews.com

Karen Hughes, meeting with Turkish women active in non-governmental organizations, got an earful of criticism this morning in Ankara. Most of those who spoke up voiced opposition to President Bush's decision to go to war in Iraq.

Hidayet Sefkatli Tuksal, an activist representing the Capital City Women's Platform, was the most outspoken. "I'm feeling myself wounded. I'm feeling myself insulted here. This (war in Iraq) needs to be resolved as soon as possible."

Hughes responded to these and several similar comments, saying "No one likes war... on the other hand... sometimes our country feels war is necessaary."

Hughes closed the session by saying, "I appreciate your candor. We need to speak frankly."

Hughes then left Ankara and flew to Istanbul.

Karen Hughes, the Bush administration's new head of public diplomacy, continued her swing through the Middle East, spent the day in Jeddah, Saudi Arabia, meeting with students at a college for women and then with a group of Saudi journalists.

"I don't think we can impose from the outside," Hughes, Under Secretary of State for Public Diplomacy, told the students. "But we can discuss … and bring out into the open all kinds of issues."

She mentioned voting, child care and driving, which women are not allowed to do in Saudi Arabia.

Then Hughes told Saudi journalists the United States was "concerned" about literature found in mosques in the America, which she said was "not tolerant." Hughes expressed the hope that Saudi officials would work on this issue with the Bush administration.

Hughes then flew on to Ankara, Turkey, where she will have more meetings Wednesday.

Hughes met with a small group of Egyptians who had studied in the U.S. She told them "it's sometimes hard to talk about difficult issues."

She was told by one that most people here do not believe the administration's Iraq policy is justified.

After meeting with Egypt's prime minister, Hughes said "I recognize policies have an impact on people's lives."

Several political and civic leaders with whom she met over lunch told reporters beforehand that Hughes' stated task of changing the largely critical opinion of U.S. Policies in the Middle East will be difficult.

One publisher of an opposition newspaper, Hisham Kassem, said "in the short term it's difficult to see how public opinion can be budged. It's a colossal task."

Another, Negad El Borai, thanked the Bush Administration, saying "they did a very good job and proved their commitment to democracy is serious."

Karen Hughes met with two groups of students, one high school age, the other from American University Cairo.

Hughes called the recent Egyptian elections, which gave voters a choice of candidates for the first time, "a step toward the democratic process." Hughes talked about Bush administration policies and seemed to enjoy the give and take with the students. she was not pressed in any serious way by her carefully chosen questioners.

Hughes' deputy, assistant secretary of state Dina Powell, an Egyptian-born American, told the students at American University Cairo that the recent devastation to the Gulf region by Hurricane Katrina "showed that America sometimes needs help too." Powell and Hughes thanked the Egyptian people for the assistance offered following Katrina.

Hughes said the Bush administration has made a "fundamental change in American policy toward the middle east," which for sixty years, she said, "turned a blind eye to democracy and freedom in favor of stability." Hughes said it was good for the people of a country to be involved in choosing their own leaders.

While Hughes didn't hear much criticism from the groups she met with, others not chosen to attend the events were critical.

Amani Fikri, who works for the opposition newspaper Wafd, told reporters outside one event that Hughes should tell President Bush "to stop backing non-democratic regimes in the region."

A merchant, who declined to give his name to reporters, said: "I don't like Bush. I like his dog."

Hughes continues her meetings in Cairo on Monday and then travels to Jeddah, Saudi Arabia.