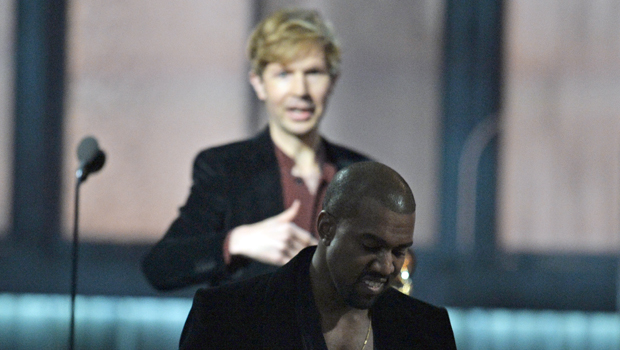 Rapper Kanye West is apologizing to Beck for storming the stage at the Grammy Awards earlier this month.

After Beck was announced as the winner for Best Album for "Morning Phase," West briefly approached the microphone but left without saying anything.

Not so after the awards, when the rapper told E!News Beck should "respect artistry" and give the statuette to Beyoncé for her self-titled album.

Thursday night, West tweeted that he was sorry:

West also tweeted an apology to singer Bruno Mars, saying "I used to hate on him but I really respect what he does as an artist," -- and offering him a job:

The Grammys episode was similar to the 2009 MTV Video Music Awards, when West interrupted Taylor Swift's acceptance speech to argue that Beyoncé deserved the Best Female Video award. He later apologized to Swift and said the pair will collaborate on a new project.

After the Grammys, Beck told Us Weekly he wasn't fazed by West's stage-crashing.

"I was just so excited he was coming up. He deserves to be on stage as much as anybody. How many great records has he put out in the last five years right?"

When asked about West's Beyoncé comments, Beck said, "I thought she was going to win. Come on, she's Beyoncé!"

"You can't please everybody, man," Beck added. "I still love him [West] and think he's genius. I aspire to do what he does."