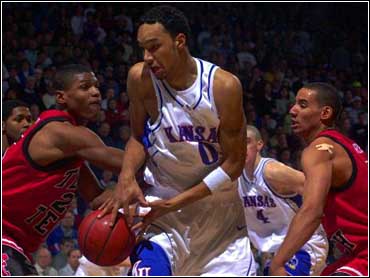 Sporting a new lineup and in many cases, new haircuts or headgear No. 15 Kansas was eager to get back to its old winning ways.

Kansas got just its second victory in five games Saturday by beating TexasTech 87-62.

"I just didn't want to look back in April and wish I'd done something to shake things up," said coach Roy Williams, who changed his starting lineup for the first time this season.

Gooden had 14 points, Boschee added 13 and Nick Bradford had 10 for the Jayhawks. Hinrich finished with nine points, Collison with eight to go with 11 rebounds.

"I think special commendations should go to Eric Chenowith and Jeff Boschee," Williams said. "I'm not saying they enjoyed it, but they accepted their roles and responded well. You look at Jeff Boschee he didn't start, but he led us in minutes (27)."

Williams said he hasn't set his starting lineup for Monday's game at No. 13 Oklahoma State. He also said that Texas Tech's status as the only team without a conference victory didn't affect his decision to start three freshmen on Saturday.

"If we'd have been playing the San Antonio Spurs, I still would have done it," Williams said. "I wasn't focusing so much on Texas Tech as I was on our state of mind."

There was also focus on the new, almost-shaved haircuts matching Boschee's trademark buz on the heads of Chenowith, Collison and backup center Jeff Carey. Gregory and Bradford, who already shave their heads, donned headbands.

"It's just hair," Collison said. "It doesn't really mean much to me. I'll do it if it will help get the team fired up."

"I really think to win conference games, you have got to have four guys in double figures," Texas Tech coach James Dickey said. "You look at their stat sheet and they do, and we only have two. We don't have as much margin for error."

Gooden scored six points in the first run, which began after Mario Layne's left-handed shot from the lane put Texas Tech up 15-14 with 13:11 left in the half. Boschee hit two 3-pointers in the second run, which gave Kansas a 38-20 lead with 5:34 remaining.

Saturday's game was the first at home for Kansas since Jan. 24, when Williams called Jayhawks fans a "wine and cheese crowd" for what he considered a lack of support in an 87-79 victory over Colorado. Williams apologized a day later for his remarks, and fans Saturday cheered loudly throughout the game.

"I was really appreciative of how the crowd reacted today," said Gregory, whose second-half dunk on a pass from Boschee drew the loudest cheers of the afternoon. "We really needed that. Hopefully, it can be like this for the rest of the season."

And for the fans who began to leave with about 2 1/2 minutes left, Kansas student Curtis Sample had a hand-lettered message.

"Be a real fan, stand and cheer" read one side of the junior's sign. For those who continued toward the exits, the other side read: