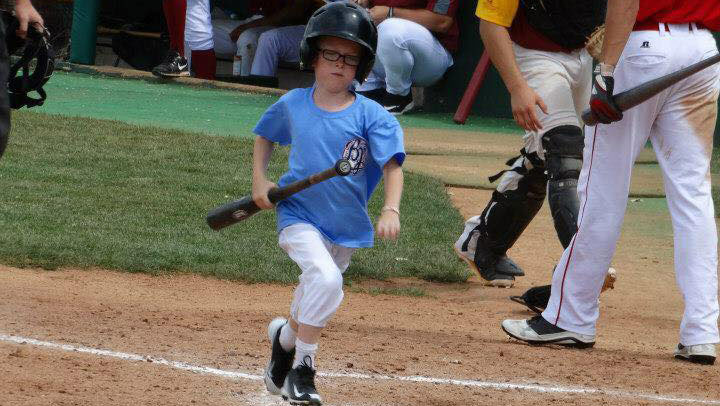 WICHITA, Kansas --Kansas City Royals professional baseball team announced on its Twitter account on Tuesday that it would honor 9-year-old Kaiser Carlile prior to a future game.

Kaiser died after he was accidentally hit in the head by a practice swing by an on-deck hitter at the National Baseball Congress World Series game on Saturday in Wichita. He later died from his injuries.

The Bee Jays, of Liberal, in southwest Kansas, announced Kaiser Carlile's death on their Facebook page on Sunday evening. Kaiser was their bat boy.

"With the permission of the family, and with much sorrow and a very broken heart, I regretfully inform everyone that Kaiser Carlile passed away earlier this evening. Please keep his family and our team in your thoughts and prayers. Thank you all for the support during this ordeal!" said the team's president, Nathan McCaffrey.

Witnesses told CBS affiliate KWCH that Kaiser was running to retrieve a bat on the ground near the on-deck hitter, who didn't notice him accidentally hit him on the head with a practice swing in Wichita's Lawrence-Dumont Stadium.

Kaiser was wearing a helmet, as the league requires.

"Right before he fell, the umpire and the base player both rushed up and caught him before he hit the ground," witness Malachi Lingg told the station. "They caught him and just set him on the ground, and they all clustered around him quickly. It was really silent. Everybody was quiet."

Home-plate umpire Mark Goldfeder, a longtime paramedic, treated Kaiser until the ambulance arrived. Meanwhile, the NBC Tournament has suspended the use of bat boys and girls, reports CBS affiliate KWCH.

Players and coaches remembered Kaiser for his winning attitude and big smile during a press conference on Monday.

"He was as much as part of the team as anybody else was," said one coach.

Outfielder Gavin Wehby said Kaiser always did his job 110 percent, was a hard worker and made the dugout a fun place to be.

"He became a brother to many of us in a short few weeks," he said.

Kaiser's family doesn't hold the team or any of its members responsible, saying everyone did everything they could to keep Kaiser safe, reports CBS affiliate KWCH.

"We can't pinpoint any one individual," said Chad Carlile, Kaiser's father. "I mean, we're all going through this. And all of us need our prayers. And me myself personally, I just feel bad for the team."

Carlile spoke unexpectedly reports KWCH, after hearing how much the team loved his son.

"Really love," he said. "It's all about the love that he had for everybody."

A GoFundMe page setup by the Liberal Bee Jays to help the family cover medical expenses has so far raised over $98,000.