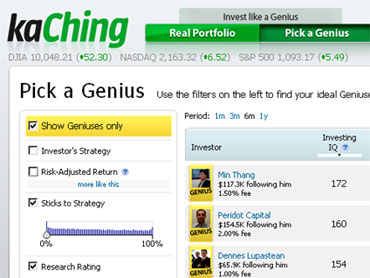 When I wrote about KaChing last December, the site was a fantasy stock market where you could track the pretend portfolios of other investors.

But the game of make-believe is coming to an end at the company, and KaChing is now letting users attach real money to their accounts.

In doing so, this company is taking on the $11.5 trillion U.S. mutual fund industry. It looks like a great opportunity, both for the investors in the company and consumer equity investors.

KaChing lets anyone create and manage a portfolio on the site, and any user can see these portfolios and track their returns. Unlike other fantasy stock-trading sites, though, with KaChing you can actually commit money to mirroring another user's portfolio. This feature should be live on the site Monday.

The site offers some protection for users choosing to track others. It awards "genius" badges to portfolio managers to only those players who have been on the site for a year, who have qualified for and signed trading regulatory documents, and whose consistent performance measures over a certain level. Only genius users can be mirrored.

KaChing traders also have to specify their fund or portfolio philosophy, which is tracked and rated by the system. If you say you're a health care investor, for example, and then you make a killing on Apple, your return may go up but your "sticks to strategy" rating will decline, and people following you or investing alongside your portfolio will be sent "drift alerts" to tell them that you might have moved from the "good" category into either the "lucky" or "reckless" bins. As CEO Andy Rachleff says, with a typical mutual fund, there's no way to tell if the investors are lucky or good, and especially not in-between quarterly statements.

To invest alongside KaChing geniuses, you have to use fund a brokerage account at Interactive Brokers, which KaChing will do for you, online. KaChing works with this particular brokerage since it has an API that lets KaChing make fast trades fairly cheaply, at 2 cents a share.

Geniuses on the site set their own management fee, of which KaChing takes 25 percent. KaChing also will collect margins on stock trade commissions. Investors who are mirroring KaChing geniuses can stop doing so whenever they wish and trade their stocks out thereafter. Unfortunately, you can't yet trade into another genius' fund without setting up a new trading account yourself, but that should be fixed shortly. Account minimums are low, though ($3,000) and there are no exit fees.

Rachleff told me that the real secret behind KaChing is the observation that the Ivy League endowments outperform the S&P due to "a superior strategy to choosing investment managers," which is what KaChing's algorithms check for. Oversimplified, KaChing rates adherence to strategy coupled with returns, not just returns themselves. That makes returns predictable, Rachleff says.

Of more than 8,000 KaChing users with public portfolios, only ten (so far) are geniuses whose accounts can be mirrored. Hopefully that number will rise. These ten people need competition, and users need options.

I'm one of millions of consumers dissatisfied with the returns in my mutual funds as well as the lack of transparency in these investments. I am a big fan of KaChing's model, enough so that I am strongly considering putting some of my own money into the service once there are more genius managers to track.
By Rafe Needleman