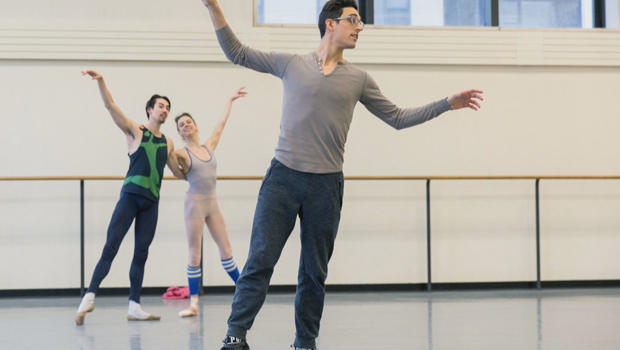 A revival of "Carousel" is stepping out ON BROADWAY, thanks in part to the pace-setter Rita Braver has been watching in action...

Rodgers & Hammerstein's glorious classic, "Carousel," the star-crossed story of a carnival barker and the woman he marries, dates back to the mid-20th century. But the dancing in this new Broadway revival is strictly 21st century, created by a young choreographer who has already become a sensation: 30-year-old Justin Peck.

Braver said, "So right now, you are kind of the "It" boy of dance."

"One story called you 'the hottest choreographic commodity in the dance world.' Is it fun to be that guy?"

"I think that's a lot of pressure to have on one person!"

Peck is a soloist with the renowned New York City Ballet.

But it's the dances that he choreographs that have built the buzz. He's drawn attention for modern touches like partnering men with men instead of women; for setting ballets to electronic music, with dancers in sneakers; and he's even created innovative videos to promote ballets on YouTube.

To view an excerpt from Justin Peck's "The Times Are Racing," click on the video player below.

"I don't want ballet to feel like an elitist art form, which is what it is, traditionally," Peck said. "It was invented as entertainment for kings and queens and all that. And now I feel, like, there has to be an accessibility to it and a way for audiences to connect to the work."

Peck discovered tap as a kid, growing up outside San Diego. But by the time he was 13, he had turned to ballet, and at 18 he won a place at the New York City Ballet, where he soon began getting bigger roles.

Braver asked, "What does it feel like when you're dancing?"

"It's like one of the few moments where you're not conscious of anything in the past or anything in the future," Peck said. "It's like you're totally caught up in the present moment. And that's a really rare experience to have in life in general."

In 2012 he began to work as a choreographer, and was soon in demand by ballet companies in the U.S. and abroad. In 2014 Justin Peck was the subject of documentary, "Ballet 422."

And he recently choreographed the dance sequences for the film "Red Sparrow," in which Jennifer Lawrence plays a one-time ballerina.

But Broadway beckoned, and Peck spent this past winter racing between his duties at the New York City Ballet and his work on "Carousel."

To help those dances soar to new heights, he cast some of his cohorts from the ballet world: Amar Ramasar plays the bad-boy sailor, Jigger Craigin, and leads the chorus in a rousing romp.

In fact, even though it's Peck's Broadway debut, he shares equal billing with multi-Tony Award-winning director Jack O'Brien.

Braver asked O'Brien," What do you think Justin brings to this?"

"Genius," he replied. "I mean, I gotta say, this has been such a joyous situation. This kid is bursting with talent."

Somehow, Peck found the time to get engaged to Patricia Delgado, a fellow dancer; and he was just named to the interim management team now running the New York City Ballet, after the departure of long-time Ballet Master Peter Martins, in the wake of sexual harassment allegations.

Braver asked, "There's a lot of speculation that you might be asked to become the new director of the New York City Ballet. Is that a job you would like to do?"

"I don't know. There's still a lot of creative work I want to do both in New York City Ballet as a choreographer and outside in the theater world and beyond. So, I gotta think about it some more!" he laughed.

In fact, these days it seems Justin Peck can do just about anything he wants.

Braver asked, "What's fun about being you right now?"

"I was actually thinking about this the other day … my second home is basically a theater. I'm either working in a theater on a project or I'm going to see something in a theatre on my night off, and it just feels like this comfort to me, and this place where I can exist, and that's really special."