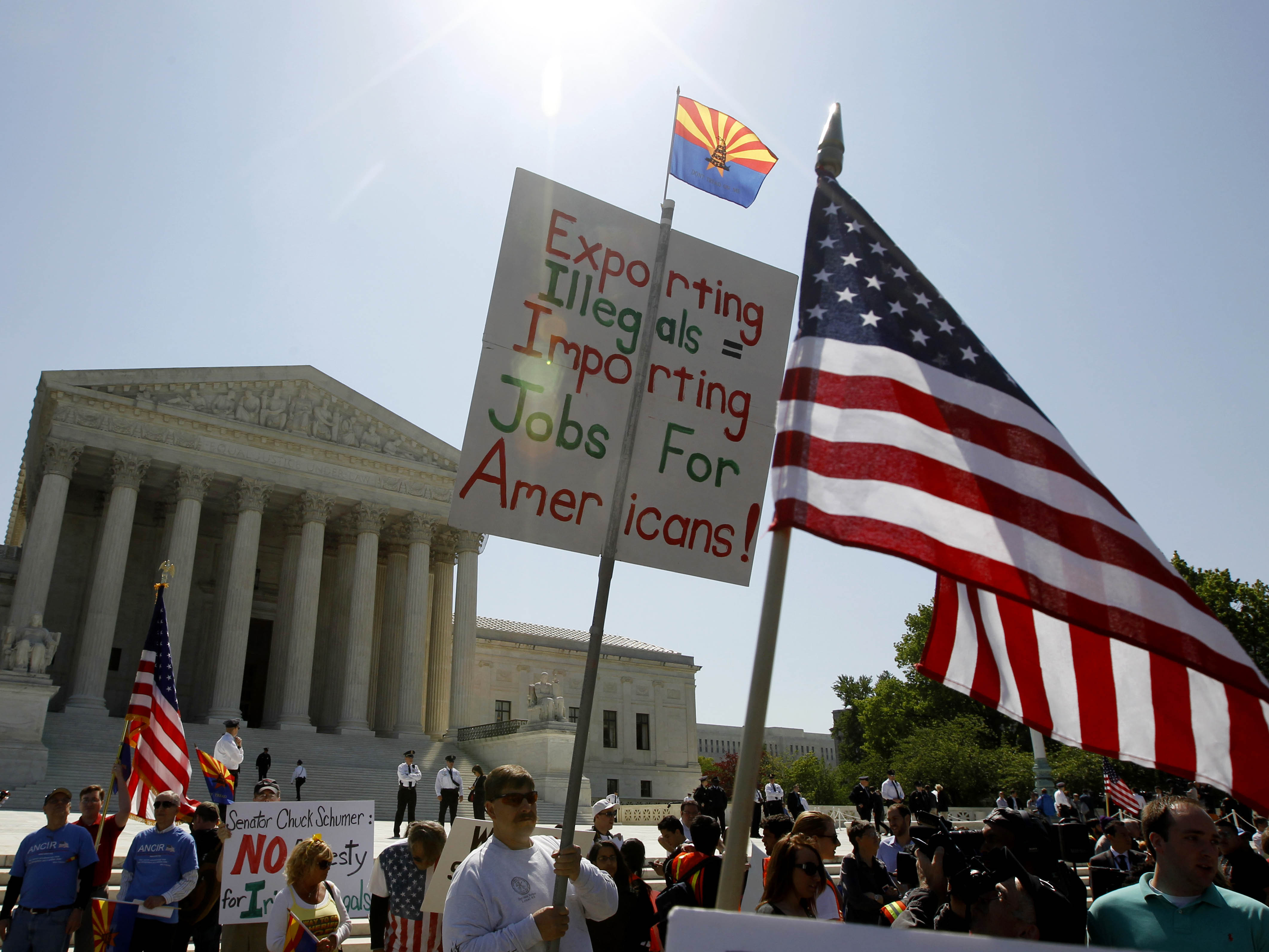 But the fate of other provisions that make Arizona state crimes out of immigration violations was unclear in the court's final argument of the term.

The latest clash between states and the administration turns on the extent of individual states' roles in dealing with the nation's 11 million illegal immigrants. Immigration policy is essentially under the federal government's control, but a half-dozen Republican-dominated states have passed their own restrictions out of frustration with what they call Washington's inaction to combat an illegal flood.

Civil rights groups say the Arizona law and those in some other states encourage racial profiling and ethnic stereotyping, and debate over such laws could have an impact on this fall's elections. More than 200 protesters gathered outside the court, most of them opposed to the Arizona law.

However, in an unusual comment, Chief Justice John Roberts made clear at the outset of the administration's argument Wednesday that the court was looking only at state-versus-federal power, not the civil rights concerns that already are the subject of other lawsuits. "So this is not a case about ethnic profiling," Roberts said.

CBS News correspondent Jan Crawford noted that Justice Anthony Kennedy, the key swing vote, talked of a federal government without the "money or resources to enforce our immigration laws" and states struggling with "social disruption, economic disruption" from illegal immigrants. She said that was just one sign of the sympathy the majority of justices seemed to have for the law.

That matter dealt with, both liberal and conservative justices reacted skeptically to the administration's argument that the state exceeded its authority when it made the records check, and another provision allowing suspected illegal immigrants to be arrested without warrants, part of the Arizona law aimed at driving illegal immigrants elsewhere.

Verrilli tried to convince the justices that they should view the law in its entirety, and as inconsistent with federal immigration policy. He said the records check would allow the state to "engage effectively in mass incarceration" of immigrants lacking documentation.

But Roberts was among those on the court who took issue with Verrilli's characterization of the check of immigration status, saying the state merely wants to notify federal authorities it has someone in custody who may be in the U.S. illegally. "It seems to me that the federal government just doesn't want to know who's here illegally and who's not," Roberts said.

Verrilli did not mention Wednesday that the administration has deported nearly 400,000 people a year, far more than previous administrations, although the information was included in written submissions to the court.

The other provisions that have been put on hold by lower federal courts make it a state crime for immigrants not to have registration papers and for illegal immigrants to seek work or hold jobs. Arizona's Republican Gov. Jan Brewer, who signed the law two years ago, was at the court Wednesday.

Arguing for Arizona, Paul Clement said the state law mirrored federal immigration law and that the state it took action because, with its 370-mile border with Mexico, Arizona "bears a disproportionate share of the costs of illegal immigration."

But Roberts expressed unease with the state's focus on illegal workers. "The State of Arizona, in this case, is imposing some significantly greater sanctions," he said.

Alone among the justices, Antonin Scalia appeared ready to uphold the entire law, which he described as an effort by Arizona to police its borders.

When Verrilli said that Arizona's immigration law could raise foreign policy concerns, especially with Mexico, Scalia said, "So we have to enforce our laws in a manner that will please Mexico. Is that what you're saying?"

Outside the courthouse, more than 200 protesters gathered. The law's opponents made up a clear majority of the crowd, chanting and carrying signs such as "Do I Look Illegal To You?" Some shouted "shame" at Brewer when she emerged from the building after the argument.

Brewer told reporters she was "very, very encouraged" by the justices' questions.

Republicans have far outpaced Democrats in pushing tough anti-immigration laws, posing potential political problems in some states for GOP candidates including Mitt Romney. The Republicans' aggressive stand has alienated many Hispanic voters, one of the electorate's fastest-growing segments.

President Barack Obama won two-thirds of the Hispanic vote in 2008, and hopes to do better this fall. In the GOP primary contests, Romney took the harshest anti-illegal immigration stance among the top contenders, but he has had little to say lately on the issue. Romney has not taken on stand on legislation proposed by Sen. Marco Rubio, R-Fla., that would allow some undocumented immigrants a chance at visas to remain in the United States.

More than a decade ago, Republicans were making inroads among Hispanic voters. President George W. Bush, a former Texas governor, favored comprehensive immigration reform that could have established pathways to legal status for millions of illegal immigrants. But staunchly anti-illegal immigration forces gained influence in the GOP, and the reform plans were dropped.

Hispanic voters are especially important in a few battleground states that will help determine the Nov. 6 presidential election. They include Florida, New Mexico, Nevada and Colorado. Romney's problems with Hispanics also might tempt Obama's campaign to make a push in Arizona, usually a reliably Republican state.

A recent poll of Hispanic voters by the Pew Research Center found that 67 percent supported Obama, and 27 percent Romney.

A decision in the high-profile immigration case is expected in late June.

Florida, Michigan and 14 other states, many of which also are challenging Obama's health care overhaul, argue that Arizona's law does not conflict with federal law.

Justice Elena Kagan, who was Obama's first solicitor general, is not taking part in the case, presumably because she worked on it while in the Justice Department.