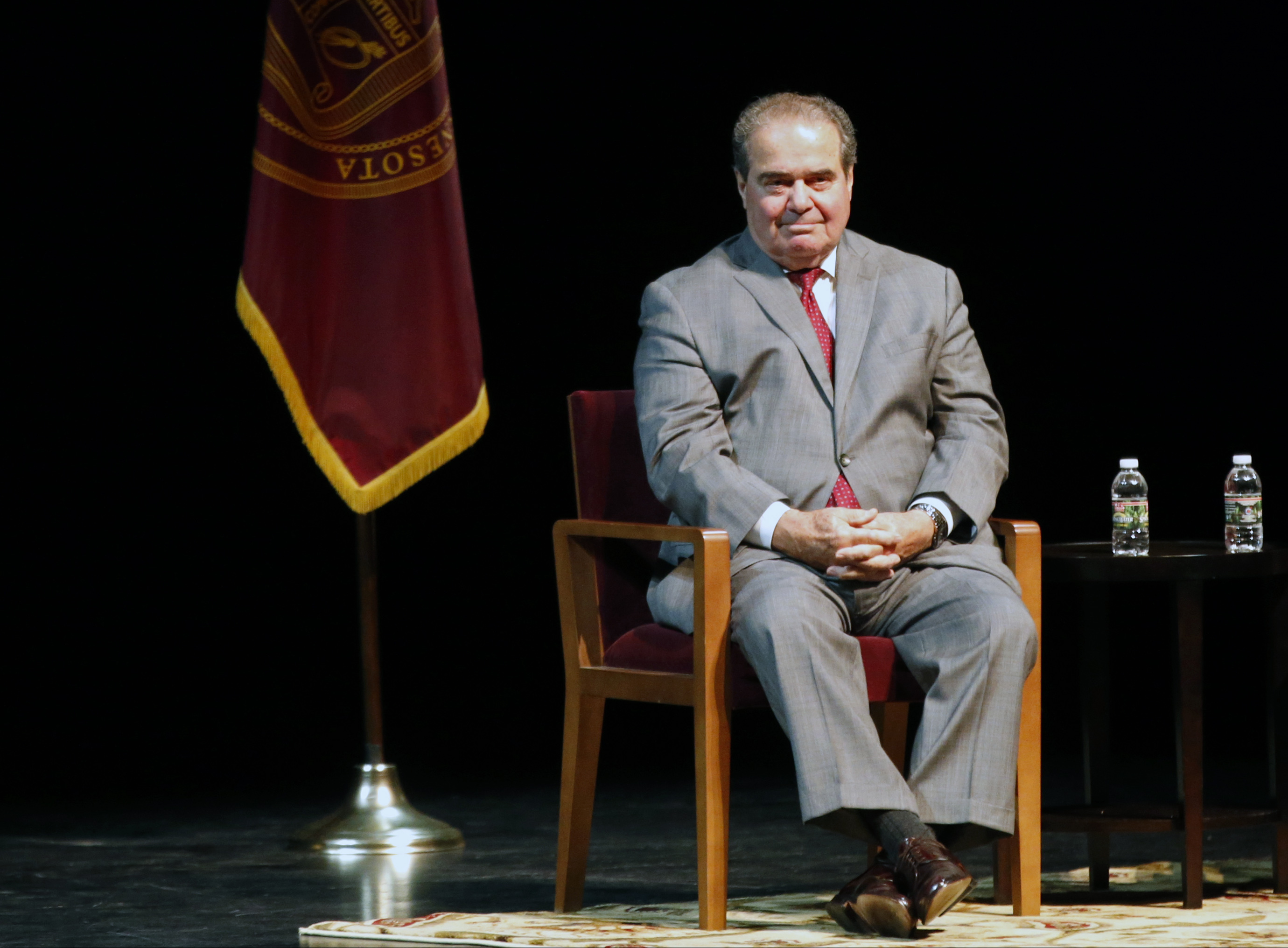 Scalia addressed capital punishment during a University of Minnesota Law School appearance in which he also made clear retirement isn't in his near-term plans. The death penalty came up as Scalia described his judicial view that the Constitution is an "enduring" document that shouldn't be open to broad interpretation -- while sharing frustration that his colleagues too readily find flexibility in it.

Scalia said death penalty decisions from the court have made it "practically impossible to impose it but we have not formally held it to be unconstitutional." Earlier in his remarks, Scalia said "it wouldn't surprise me if it did" fall, a comment that drew scattered applause in the mostly full, 2,700-seat auditorium.

He said the high court has increasingly made it difficult impose the death penalty. He said rulings have added mitigating circumstances that must be considered or made it impermissible to automatically sentence people to death for certain crimes, such as killing a police officer.

The Supreme Court this month began its latest term and has already heard one death penalty challenge from Kansas. While that case is limited in scope, it was the first high court hearing on death penalty cases since a bitter clash over lethal injection procedures exposed deep divisions among the justices last term. The court intends to consider a case from Florida that questions whether judges, rather than juries, can impose a death sentence, especially when the jury is not unanimous in recommending death.

In his 30th year on the Supreme Court, Scalia is the longest-tenured current justice. The 79-year-old said he's in no hurry to leave when asked by an audience member if justices should be forced to leave after a certain number of years rather than hold indefinite appointments.

"As soon as I think I'm getting lazier and I just can't do the job as well, I'm going to get off there. I want to preserve whatever reputation I have," Scalia said, adding, "If you've lost your smarts, yeah, you should get off. But that hasn't been the case."

Until then, Scalia indicated he'll forcefully hold to views that make him a stalwart on the court's conservative wing. He said he has no ambition to be a swing vote -- "I'd rather be right," he said. His often-colorful opinions have drawn him wide attention and sheer time has put him toward the top of all-time dissenters.

"I have never aspired to have the most dissents in the court's history," Scalia said. "I'm in third place now. I hope I'm never in first place."

On Monday, Ohio announced it is putting off executions until at least 2017 as the state struggles to obtain supplies of lethal injection drugs, delaying capital punishment for a full two years, the prisons department announced.

Last week, the attorney general's office in Oklahoma announced no executions will be scheduled until at least next year as the office investigates why the state used the wrong drug during a lethal injection in January and nearly did so again last month.

Earlier this month, an Arkansas judge halted the upcoming executions of eight death row inmates who are challenging a new law that allows the state to withhold any information that could publicly identify the manufacturers or sellers of its execution drugs.

On Oct. 1, Virginia executed serial killer Alfredo Prieto, but only after obtaining pentobarbital from the Texas prison system. Texas has continued to purchase supplies of compounded pentobarbital without saying how much it has obtained or where it came from.

At Ohio's last execution in 2014, condemned killer Dennis McGuire repeatedly gasped and snorted during a 26-minute procedure, the longest in Ohio history, as a new two-drug combo was used.