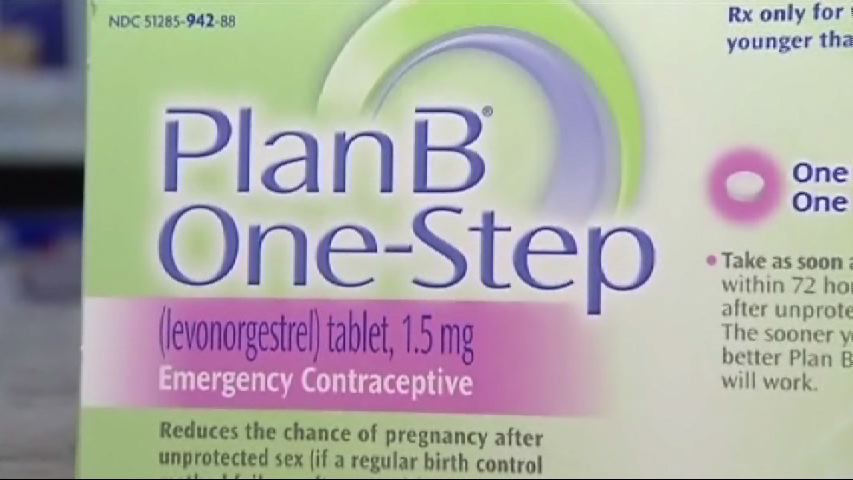 WASHINGTON The Obama administration on Wednesday appealed a federal judge's order to lift all age limits on who can buy morning-after birth control pills without a prescription.

The decision came a day after the Food and Drug Administration had lowered the age that people can buy the Plan B One-Step morning-after pill without a prescription to 15 — younger than the current limit of 17 — and decided that the pill could be sold on drugstore shelves near the condoms, instead of locked behind pharmacy counters.

With the appeal, the government is making clear that it's willing to ease access to emergency contraception only a certain amount — not nearly as broadly as doctors' groups and contraception advocates have urged.

The order by U.S. District Judge Edward Korman of New York would allow girls and women of any age to buy not only Plan B but its cheaper generic competition as easily as they can buy aspirin. Korman gave the FDA 30 days to comply, and the Monday deadline was approaching fast.

In Wednesday's filing, the Justice Department said Korman exceeded his authority and that his decision should be suspended while that appeal is under way, meaning only Plan B One-Step would appear on drugstore shelves until the case is finally settled.

"We are deeply disappointed that just days after President Obama proclaimed his commitment to women's reproductive rights, his administration has decided once again to deprive women of their right to obtain emergency contraception without unjustified and burdensome restrictions," said Nancy Northup, president of the Center for Reproductive Rights, which filed the lawsuit that prompted Korman's ruling.

Rather than take matters into his own hands, the Justice Department argued to the 2nd U.S. Circuit Court of Appeals that Korman should have ordered the FDA to reconsider its options for regulating emergency contraception. The court cannot overturn the rules and processes that federal agencies must follow "by instead mandating a particular substantive outcome," the appeal states.

The FDA actually had been poised to lift all age limits and let Plan B sell over the counter in late 2011, when Health and Human Services Secretary Kathleen Sebelius overruled her own scientists. Sebelius said some girls as young as 11 were physically capable of bearing children but shouldn't be able to buy the pregnancy-preventing pill on their own.

Sebelius' move was unprecedented, and Korman had blasted it as election-year politics — meaning he was overruling not just a government agency but a Cabinet secretary.

Whatever happens in court, moving the morning-after pill over the counter, even if limited to buyers 15 or older, marks a big societal shift in the long battle over women's reproductive rights. But in the volatile debate, both sides were unhappy with FDA's surprise twist.

On Wednesday, doctors' groups including the American College of Obstetricians and Gynecologists urged the Obama administration not to let the FDA action be the last word, and to follow Korman's lead.

Any over-the-counter access marks a long-awaited change, but it's not enough, said Dr. Cora Breuner of the American Academy of Pediatrics, which supports nonprescription sale of the morning-after pill for all ages.

"We still have the major issue, which is our teen pregnancy rate is still too high," Breuner said.

Even though few young girls likely would use Plan B, which costs about $50 for a single pill, "we know that it is safe for those under 15," she said.

Most 17- to 19-year-olds are sexually active, and 30 percent of 15- and 16-year-olds have had sex, according to a study published last month by the journal Pediatrics. Sex is much rarer among younger teens. Likewise, older teens have a higher pregnancy rate, but that study also counted more than 110,000 pregnancies among 15- and 16-year-olds in 2008 alone.

Contraception advocates see a double standard. No one is carded when buying a condom, but under the FDA's decision they would have to prove their age when buying a pill to prevent pregnancy if that condom breaks.

"This isn't a compromise. This is wrong," said Cynthia Pearson of the National Women's Health Network.

Social conservatives were outraged by the FDA's move to lower the age limits for Plan B — as well as the possibility that Korman's ruling might take effect and lift age restrictions altogether.

"This decision undermines the right of parents to make important health decisions for their young daughters," said Anna Higgins of the Family Research Council.

Obama aides bristled at the suggestion that the FDA decision was an attempt at political compromise, insisting the FDA merely responded to an application filed by Plan B's manufacturer which sought the 15 age limit and over-the-counter sales.

At the same time, Carney signaled that a policy allowing 15-year-olds to buy the pill off the shelf would be more palatable to Obama than the prospect of 11-year-olds having unfettered access. Pointing to Obama's comments in support of Sebelius back in 2011, Carney said, "he referred to younger girls, and I believe so did Secretary Sebelius."

If a woman already is pregnant, the morning-after pill has no effect. It prevents ovulation or fertilization of an egg. According to the medical definition, pregnancy doesn't begin until a fertilized egg implants itself into the wall of the uterus. Still, some critics say Plan B is the equivalent of an abortion pill because it may also be able to prevent a fertilized egg from attaching to the uterus, a contention that many scientists — and Korman, in his ruling — said has been discredited.