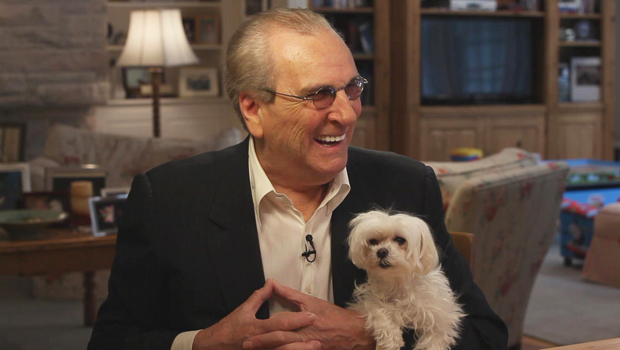 If you don't know who Danny Aiello is, there's no reason to feel bad. It turns out HE doesn't seem to know who he really is, either -- or so the veteran actor tells Tracy Smith:

Just who is Danny Aiello?

Or "Moonstruck"'s Johnny Camarreri, engaged to Cher, but devoted to his ailing mother.

Turns out, Danny Aiello himself doesn't know who he is. That's one of many confessions in his new memoir, published by CBS' Simon and Schuster. The title: "I Only Know Who I Am When I Am Somebody Else."

What does he mean by that? "I have no idea who I am," he said. "Now, when I'm playing a character, I know exactly what I'm going to say, who I am, where I came from. And life is lot easier like that."

In a four-decade career, he's played more than 90 different roles. But Aiello's own story may be the most dramatic, and revealing. It began in New York City.

His father, in Aiello's words, took a hike before he was born. So to help support his family, young Danny became a virtuoso with a buffing rag at Grand Central Terminal. He started shining shoes when he was nine years old.

"I used to pop it like music. It was just jazz. Pop. Pop. Pop! I was greatly proud of that. And you had to pop it when you were with the soldiers because in 1942 I was doing a lot of GIs."

Just eight years later, Aiello joined the Army himself. His athletic talent got him a coveted assignment: playing baseball to entertain the troops.

"So when people say to you, what'd you do in the Army" during the Korean War? asked Smith.

"And you wanted to see combat?"

"I wanted to see -- but I didn't know what I was talking about," Aiello said. "I was a tough kid and I felt this is where I belonged."

But that tough kid found his soft spot when he came home to New York, and met a girl named Sandy Cohen. "And I was like, hypnotized. She was the most beautiful thing, I swear to you, that I had ever seen."

Catholic Aiello married Jewish Cohen in 1955. They went on to have three sons and a daughter.

When asked their secret to being married for 60 years, Sandy Aiello said, "Oh, don't talk to each other! No, I don't know. I really don't know. It's like we're so different, too. We have nothing in common!"

But Sandy Aiello does agree with her husband on one point: she says he really doesn't know who he is.

When their relationship began, Danny was a hustler, who pocketed other people's money playing pool. "There are some people that come in with a lot of money. They're just damn stupid. They want to spend their money -- they come in, and they want to be beat," he said.

But as his family grew, Aiello needed a steady paycheck, so he decided to "Go Greyhound."Aiello spent 10 years there, first, as a baggage handler, and later, as the bus station's public address announcer. He stepped into the booth and demonstrated for us, with stops still burned in his memory:

"That's without reading towns," he later said. "It's all in the head!"

Aiello was also a union leader, and after he was fired following an unauthorized strike, he worried his family would go hungry. So he turned to crime, and safe-cracking.

"We threw the safe out of the window, and if it broke in the backyard, then we went in and got whatever was there," he recalled.

"But you never got caught?" asked Smith.

"Yeah, I thought I was disgusting."

Eventually, Aiello landed a job as a bouncer at the Improvisation comedy club. He got to fill-in as emcee, and found he had a knack for performing. So at the age of 36, he started acting.

Great parts kept coming, and in 1990, Aiello got an Oscar nomination for Best Supporting Actor in "Do the Right Thing."

"You really believe that?"

"Danny Aiello? Come on. Backed into acting. Never studied a day in his life. I'm not being cool here, I'm telling you straight dope."

Nevertheless, two of Aiello's sons went into the business. Rick is an actor, and Danny III was known throughout the industry as a great stuntman. In "Fort Apache, the Bronx," when you can't see Danny, it's his son throwing the punches.

But at age 52, Danny III was diagnosed with pancreatic cancer. He died in 2010.

His father said, "Everything in me was empty. There was not -- there wasn't a human. I didn't feel anything. I was completely numb."

Aiello says he found comfort in work. Still, at 81, he can't help thinking about his own mortality.

"If death comes, it comes, and it will someday," he said. "How I'm gonna deal with it, I don't know. Hopefully good. But I don't like airplanes. A lotta people say, 'Well, you afraid?' No. What bothers me when I get in an airplane is that -- maybe I didn't say to those that I love, that I didn't hug each one of them and say 'I loved you' before I went. Because I would hate to think I died and they didn't hear my last words. That's why I hate to fly."

A life lived with few regrets, except maybe one: He never got to work with the great director Martin Scorsese.

"Now, I'm the only Italian American in the United States that's not in one of his movies," he laughed. "Okay? I am the only one. Does he think I suck? Does he think I'm the worst actor in the world? Maybe he does. That's fine. But I've seen some of the actors in some of his pictures. And they do suck. You know what I mean? But they were still in his movies.

"Anyway. I don't want you to think I resent Marty Scorsese because of that. But I do," he laughed.

WEB EXCLUSIVE: Read an excerpt from Danny Aiello's "I Only Know Who I Am When I Am Somebody Else"