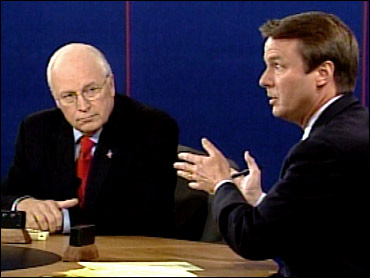 Whether it was Dick Cheney's faux-pas about never meeting his rival or John Edwards' oversimplifications about troops in Iraq, the vice presidential debaters stretched facts even as they claimed the high ground in setting the record straight.

Technicalities were cast aside on both sides.

Cheney said Democratic presidential candidate John Kerry voted for the Iraq war, but the reality was more complex. The senator backed a resolution that allowed the war to happen but said he took President Bush at his word that he'd exhaust weapons inspections and build a true coalition first.

Edwards turned a complicated matter involving allowances for troops into a "height of hypocrisy" effort by Mr. Bush to "cut their combat pay" even as they fought in Iraq.

The accusations flew. Sometimes the target had a chance to swat them down. Often they went unanswered.

"A lot of factual inaccuracies were left standing," said Kathleen Hall Jamieson, who monitors the campaign for distortion as director of the Annenberg Public Policy Center at the University of Pennsylvania.

Cheney declared Saddam Hussein's Iraq "had an established relationship with al Qaeda" despite the prevailing theory by U.S. intelligence that such a link was tenuous and did not amount to state sponsorship of the terrorist organization or any link to the Sept. 11, 2001, attacks.

Edwards asserted the connection was minimal or nonexistent. The recent Senate Intelligence Committee report on flawed Iraqi intelligence did conclude, however, that the CIA was reasonable in thinking there were probably several contacts between Iraq and al Qaeda throughout the 1990s, although they did not add up to a formal relationship.

In perhaps the most awkward blooper of the evening, Cheney told Edwards to his face that they had never met before the debate.

Cheney and Edwards also shook hands when they met off-camera during an April 2001 taping of NBC's "Meet the Press," moderator Tim Russert said Wednesday on "Today."

Cheney was trying to make the point that Edwards was an absentee senator. "The first time I ever met you was when you walked on the stage tonight."

At one point, Edwards attacked Cheney for the administration's decision to give billions of dollars in new contracts in Iraq to Halliburton Co., which the vice president once headed. But congressional auditors recently concluded U.S. officials met legal guidelines in awarding the business without competition — in part because Halliburton was the only company capable of doing some of the work.

Edwards also asserted, "They sent 40,000 American troops into Iraq without the body armor they needed," a comment that might suggest they had no body armor at all, when in fact they did.

Gen. Peter Pace, vice chairman of the Joint Chiefs of Staff, said 40,000 troops did not have the brand new, improved armor but, "every soldier and Marine on the ground had body armor."

Edwards also claimed, as Kerry has, that the Iraq war had cost the United States $200 billion. While the war is expected to cost that much by the end of next year, to date the estimate is closer to $120 billion, as Cheney asserted.

Cheney accused Kerry of voting for taxes 98 times. That's down from the 350 times wrongly claimed by Republicans, but it's still iffy. Those 98 votes include times when many procedural votes were cast on a single tax increase or package, according to an analysis by Annenberg's FactCheck.org.

Cheney meant to cite FactCheck.org on another occasion during the debate but he got it wrong, and unintentionally steered Web surfers to a site run by the anti-Bush activist billionaire, George Soros. Cheney said "factcheck.com," when he should have used "org."

Whatever the relationship between al Qaeda and Iraq over the years, another question was whether Saddam's Iraq had anything to do with the Sept. 11 attacks specifically. There is no evidence of that.

The vice president stated flatly that he has never suggested a connection between Iraq and Sept. 11.

But he did say in 2003 that if efforts to establish democracy in Iraq succeeded, "we will have struck a major blow right at the heart of the base, if you will, the geographic base of the terrorists who have had us under assault now for many years, but most especially on 9/11."

Touching on a favorite Democratic theme, Edwards declared the Bush administration is "for outsourcing jobs," taking out of context comments from Labor Secretary Elaine Chao and a report by a council of economists who advise the president. Mr. Bush and Cheney have not said they favor the practice of U.S companies sending jobs from the United States to cheaper labor abroad.

The Council of Economic Advisers said job outsourcing is part of a healthy dynamic in which free trade in return benefits Americans. And Chao said last month that the concerns about job losses ignore that foreign-owned companies are creating many jobs in the United States at the same time.

Also in the debate, Edwards said that while U.S. troops were fighting in Iraq, the Bush administration "lobbied the Congress to cut their combat pay. This is the height of hypocrisy."

It's also arguable. When the government faced prospects that increased allowances for the troops would expire as stipulated by Congress, the Pentagon said it would make up any shortfall through incentive pay or similar means.